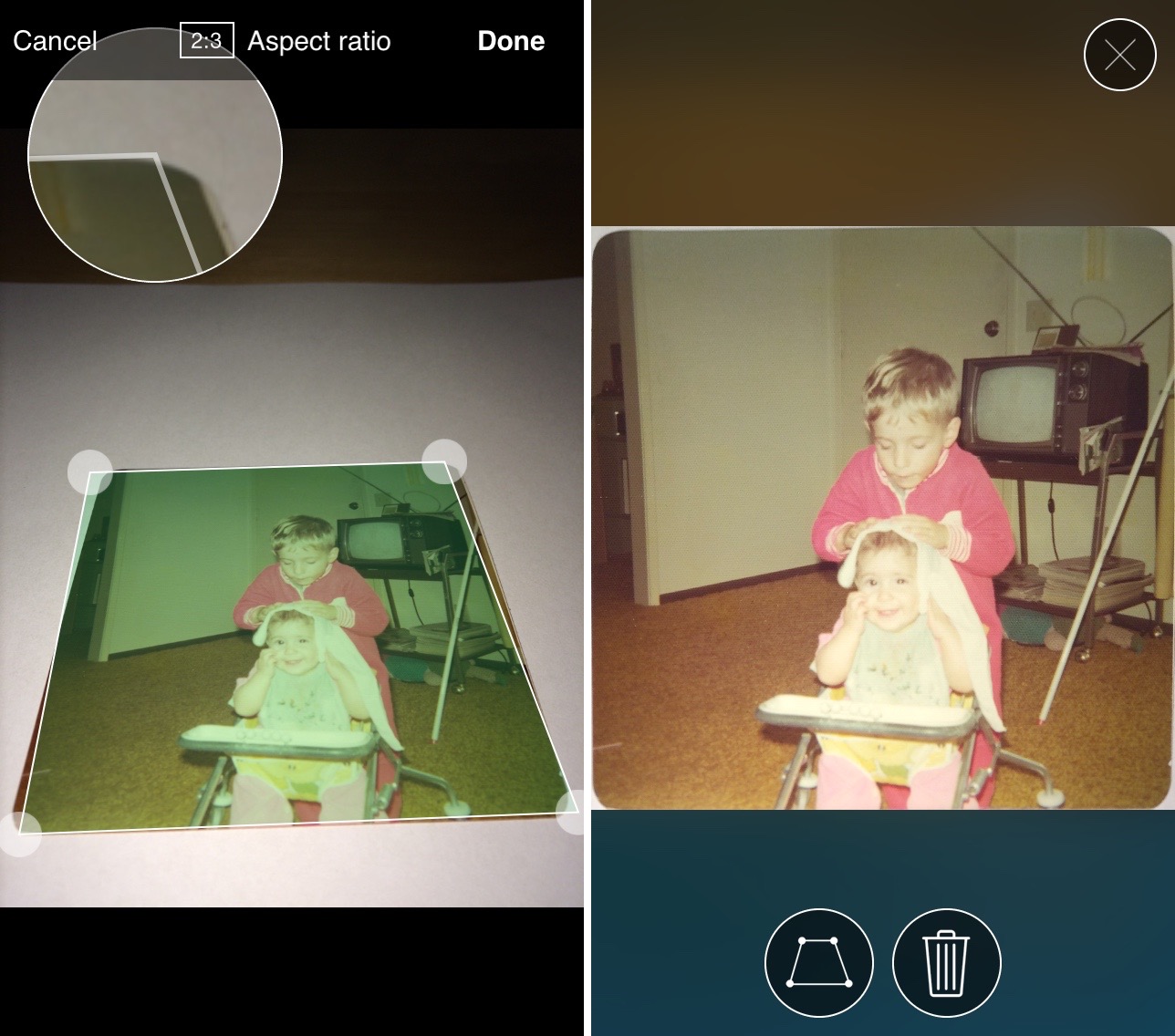 Say it’s Thursday, and you are frantically looking for some hilarious high school picture of yourself to share with the world on Facebook or Twitter. Once you’ve found the pic, you can’t seem to get a good angle to take a picture of it with your iPhone in order to turn it into a JPEG to post online. Too much glare. It looks blurry. It’s too dark.

I have hundreds of photos. Some are of my great grandparents in the 1920s. Others date back to less than a decade ago. I keep them in cardboard boxes, unprotected from the elements. Some have faded and torn. Many are covered in dust. I rarely look at them because they sit in my garage, under piles of other boxes.

This app makes it easy to turn a film photograph into surprisingly high quality digital images. Unlike snapping a picture directly from your iPhone, the app features special tools that help you get the perfect photo every time, no glare, no weird angle, no blur.

The app is set up to allow you to quickly and easily grab digital versions of film photographs. The camera button takes you to the viewfinder, where you set up and take the shot. Pictures are stored in the app, displayed on a grid. Tap a photo to edit it, delete it or adjust the corners.

When in photo shoot mode, you will receive friendly advice on how to get the best angle for your picture. Everything is easy to figure out without much need for a tutorial. 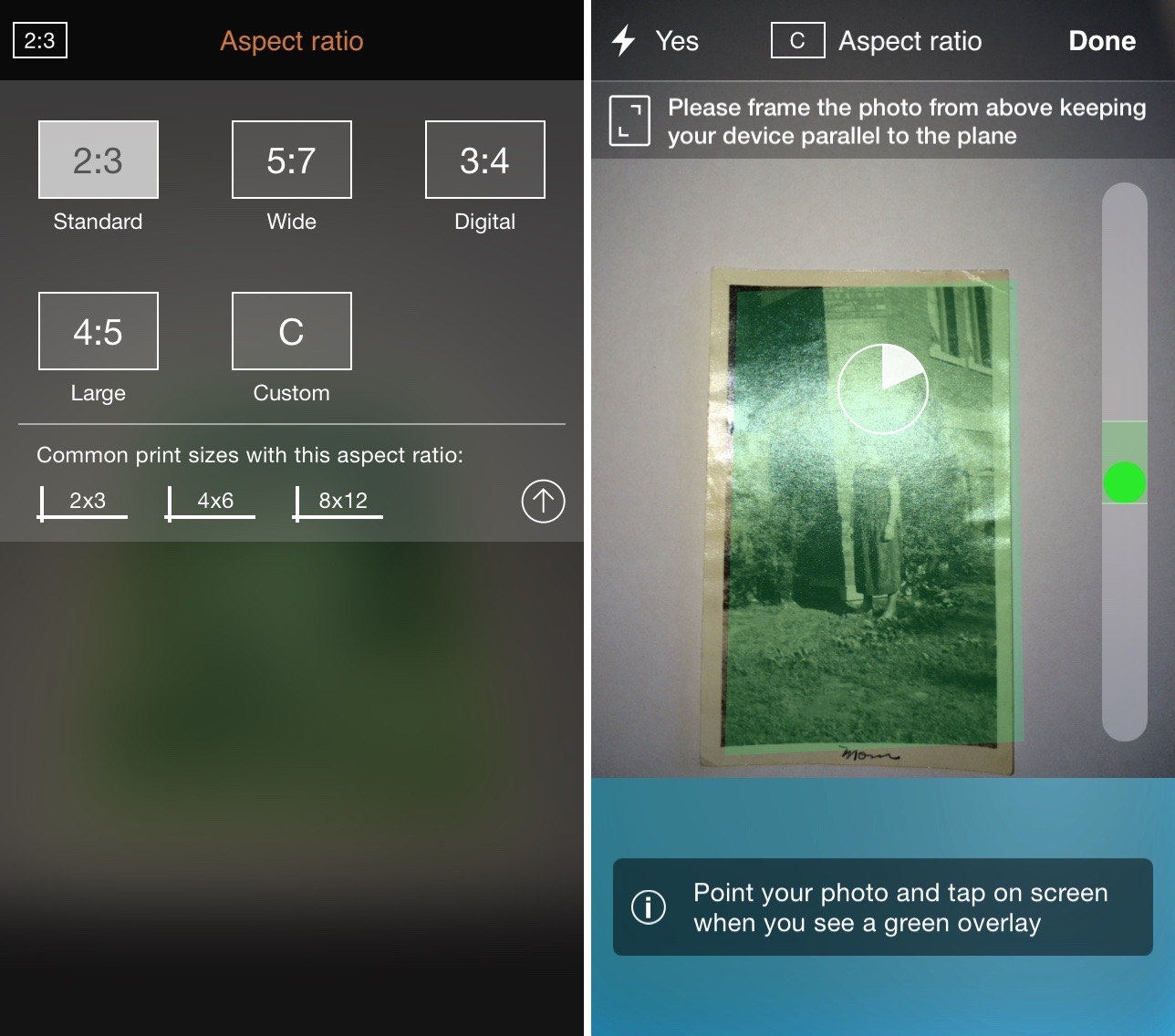 For the app to perform at its best, photos need to be sitting on top of a plain white background. If your pictures are loose, grab a piece of paper. If they are in a photo album with a light, plain background, you can leave them in their protective seal.

Hold your iPhone at about a 45-degree angle and point it at the photograph. I know this seems counter-intuitive because you don’t get a straight shot of your picture, but trust me. It works.

When the app is able to read the corners of the picture, a green overlay will appear, giving you the go-ahead to take the picture. Tap the screen and you will take a flash picture of the photograph.

The app automatically detects the aspect ratio of the picture, but you can also manually select a ratio, customize the ratio, or measure the photograph to get a precise customization. I have a lot of square photographs (I grew up in the 1970s when square photography was all the rage), so I can custom set the ratio for 3:3.

When you measure a photograph, you will hold your iPhone directly above the picture for a few seconds and it will digitally customize your aspect ratio for you. If it all worked perfectly, the picture will look like it was taken directly with a digital camera instead of being from an old film photograph.

Of course, it doesn’t always work perfectly (though more times than not), but that is OK because you can adjust the corners or change the aspect ratio in post.

Tap a picture to call up the skew feature. This allows you to manually adjust the angle of the overlay, which better centralizes your picture. You can also change the aspect ratio at this point, which might help with photos that look stretched.

When you are ready, you can share the pictures to a variety of social networking sites using iOS 8’s App Extension feature. You can also email, text, and save pictures to your camera roll.

The digitized pictures will have a very big watermark across them until you upgrade to the full version for $1.99, which I have a feeling you will want to do. The full version also includes filters, which you can add to your pictures before you are ready to share them with others. 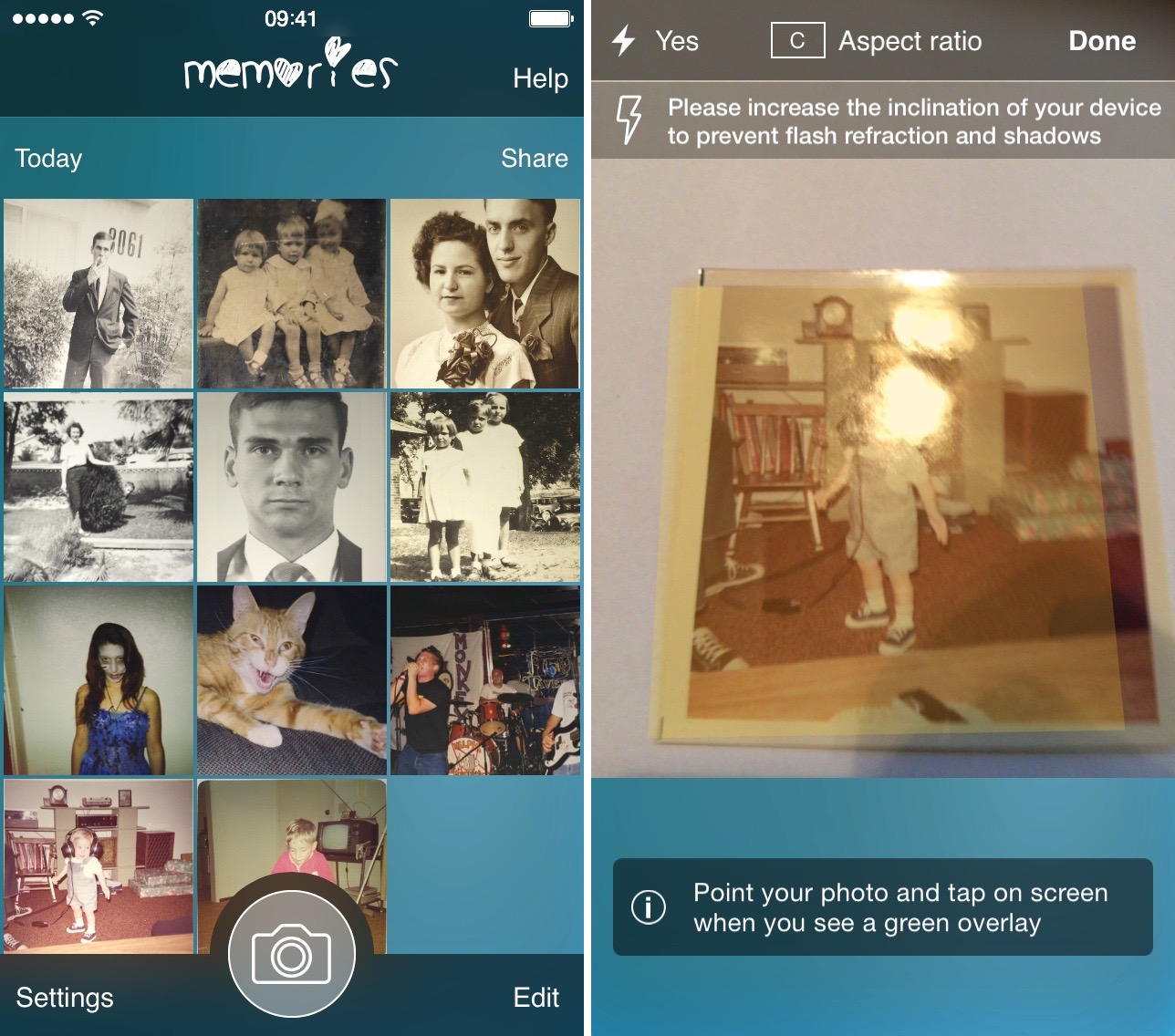 I was very skeptical, at first, as to how this was any different than simply taking a picture of a film photograph. I was pleasantly surprised at how well this app works.

It also works great in portrait or landscape mode and automatically detects which one your photograph is, letting you know to rotate your iPhone for the best results.

It is also very good at making dark pictures brighter. I have this really old picture of my grandmother from about 1930 that is so dark I can barely see it. It is one of the types that are glued into a cardboard backing. When I digitized it with this app, I was able to see the images much clearer than ever before.

If you take multiple pictures in one sitting, the recently added ones appear at the bottom or side of the screen in a big blue box. They really get in the way of your ability to properly line up the next shot. I really hope they get rid of that.

Memories – Instant Photo Scanner is free to download and you can scan as many pictures as you like. However, sharing them without a watermark, or adding a filter, will cost you $1.99 to unlock the full version. After digitizing about a dozen pictures that I know my mom will love, I can say that the in-app purchase is well worth the price.

If you participate in the Throw Back Thursday craze on social networking, this is a fantastic app for you. If you have hundreds of old film photographs that you’ve always wanted to preserve digitally, you can make your dreams come true with this app. Download it in the App Store today.