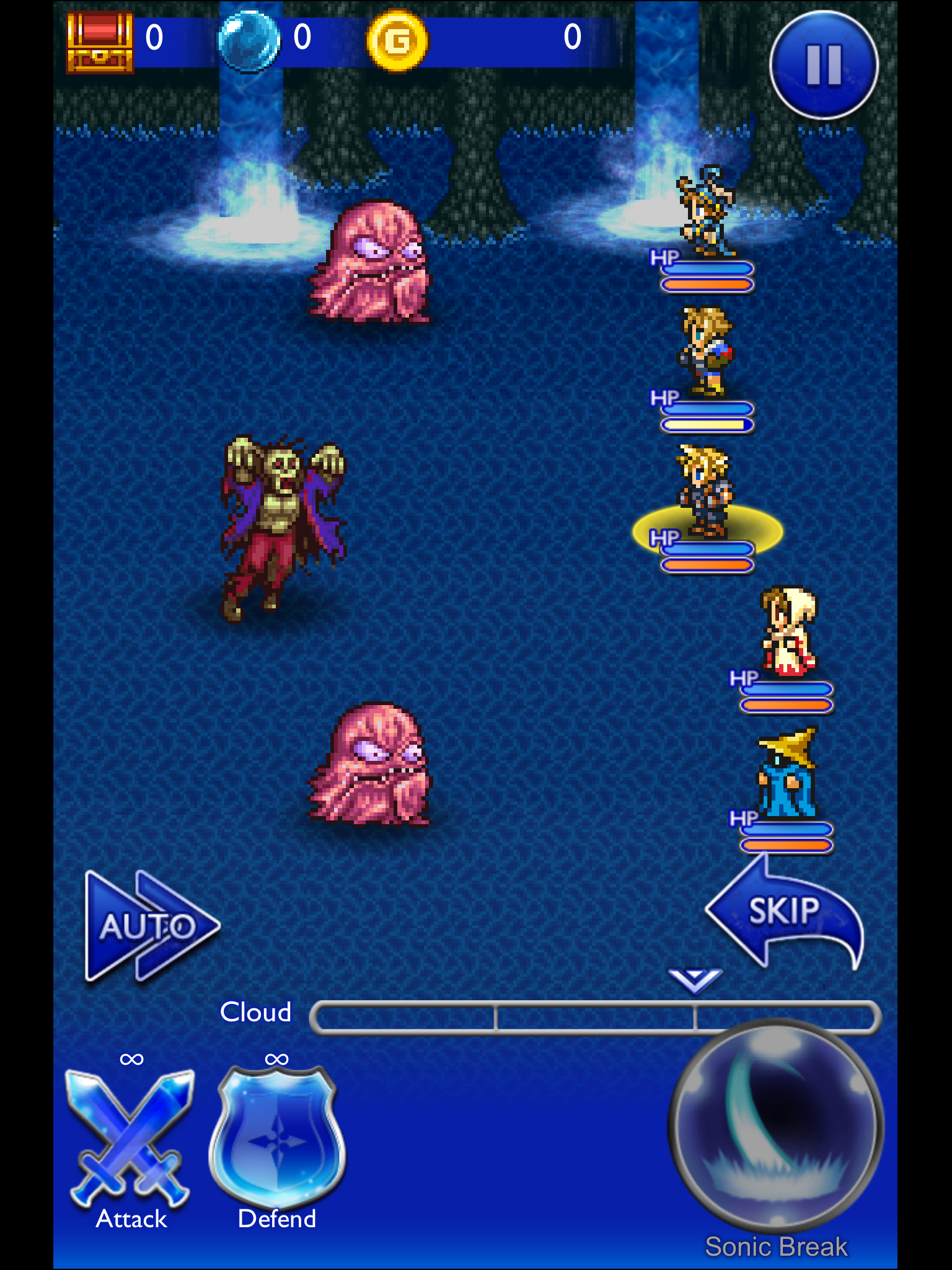 Fans of the Final Fantasy franchise have probably already checked out Square Enix’s latest mobile adventure and made their judgments quickly.

FFRK is based on Final Fantasy titles of year’s past. It is intended to stir up nostalgic feelings for fans of the franchise, but is also nicely executed for players new to the story. In each record realm, players experience a wash of familiar sights and sounds. Realms are identified by their number. So, Realm VII will take you to a FF VII themed room where you will play out battle scenes from the original game including recognizable landscapes, memorable soundtracks, and beloved characters.

Players battle against monsters in different rooms in an effort to restore the archives of the Final Fantasy storyline. The more monsters you defeat, the more of the story is restored. In the hall portion of the game, players upgrade their party members and equipment, create and equip abilities, and find new realms to enter.

Inside realms, players battle it out with iconic enemies in rounds of three to five with a final boss at the very end.

While this game is obviously designed to appeal to fans of the Final Fantasy franchise, it can still be enjoyed by gamers that have never played any of the titles. The tutorial round explains most of the mechanics 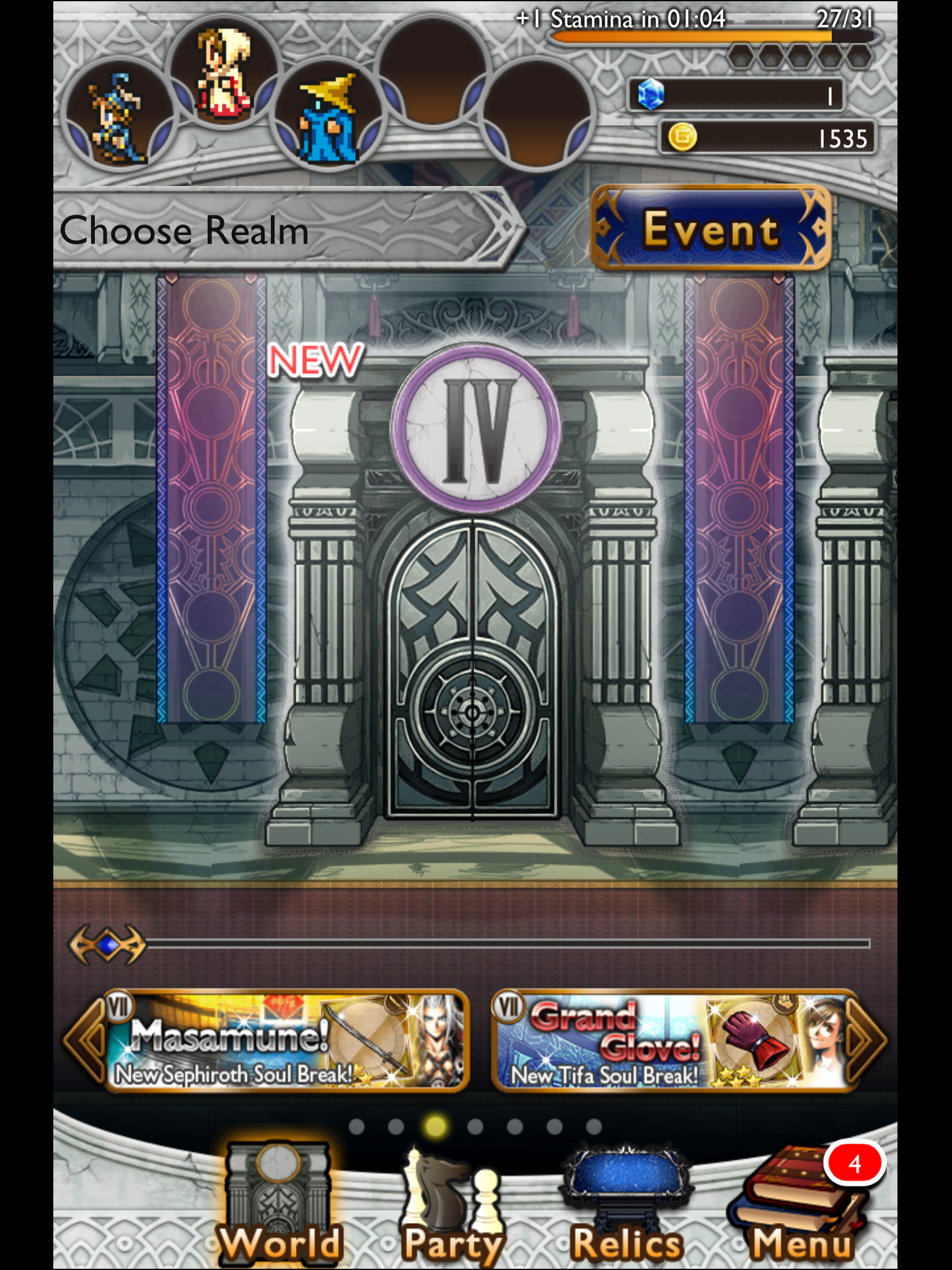 In each realm, players select specific abilities for each party member in order to attack, defend, or heal. Some abilities are extra effective against monsters, while others are weaker. You can experiment with which ones work best and use them to your advantage against monsters.

Each battle costs stamina points, which is where the free-to-play aspect comes in. Once you have depleted your stamina, you must wait until it is replenished or pay to add more. From my experience, stamina replenishes quite fast on its own, and at least the early battles are fairly cheap when it comes to spending.

As you battle in new paintings, you will unlock new party members, which you can add to your group. Players can only have five party members at a time, so pick the ideal candidate for each realm. Different characters come from different realms and have a bonus when in that realm. For example, Cloud comes from Final Fantasy VII. So, whenever he is in realm VII, he will receive a bonus to their hit points, experience points, and more.

When not doing battle, it is wise to upgrade anything and everything that you can. Players can use weapons and armor that they loot during battle as materials to upgrade what they have. You can also combine two compatible items to make one new one.

Abilities are created out of orbs. As you collect orbs through gameplay, you can use them to create new abilities. Then, equip your party members with them so they have more options during battle.

You can also unlock relics, which reveal rare items that you can equip. In this section, players can either use their coins or gems, or pay for them via in-app purchases. Rare relics cost a pretty penny, but are mainly items that pay homage to the game franchise. 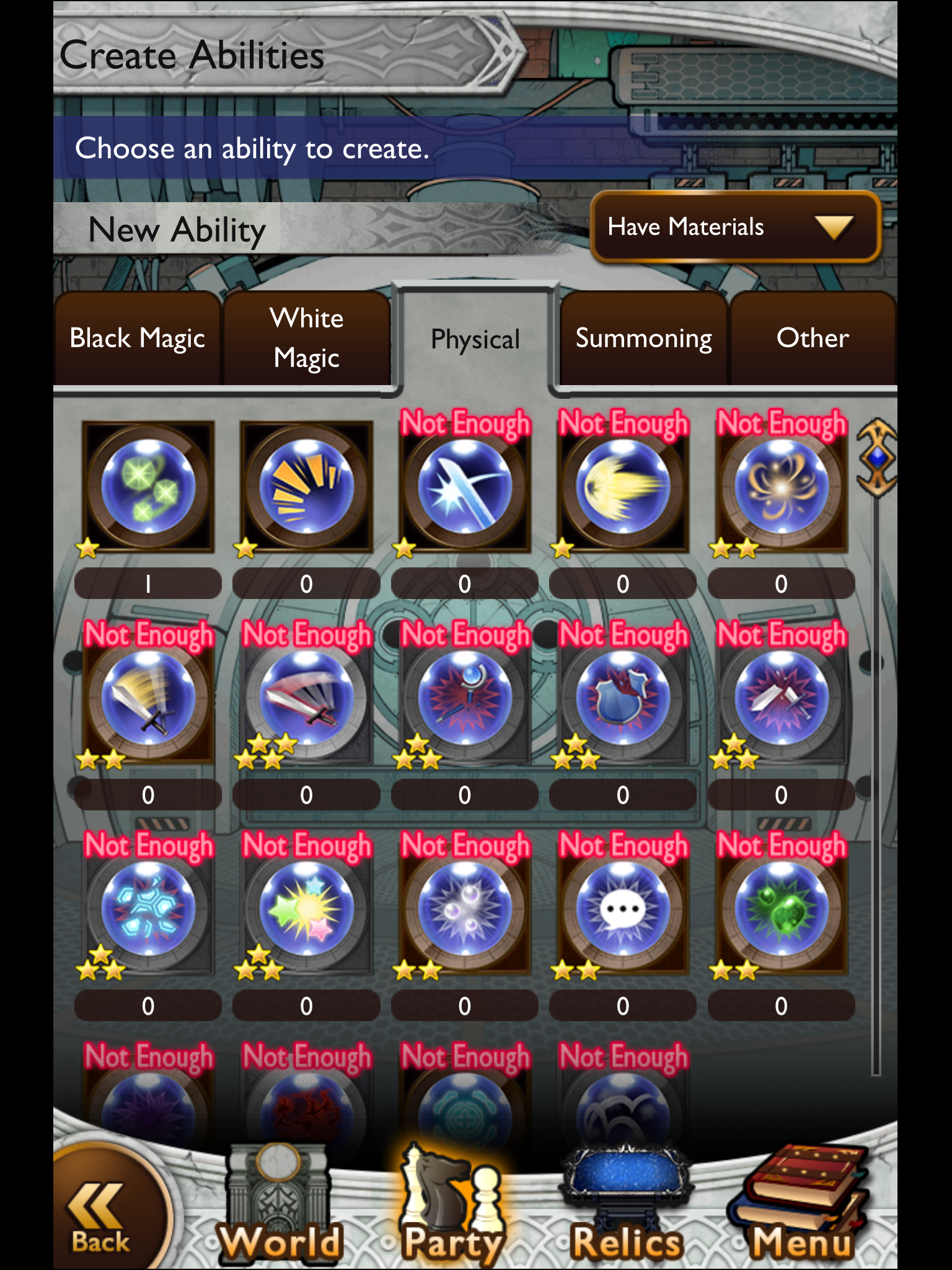 I found myself playing this game for way longer than I should have. Whether I was killing monsters in battle or upgrading my items, I always had something to do. If you run out of materials or money, you can always replay a dungeon to earn more.

The tutorial is a bit long-winded. There tends to be more writing than acting. It would be nice if tutorial mode automatically appeared any time a new element was added to the game instead of it being thrown at players all at once.

FFRK is free to play, but don’t let that deter you. You will not be bombarded with branch after branch of in-app purchases. In fact, I’m not even sure where the in-game store is. The replay value is through the roof. You can replay any battle in order to gain experience for party members, earn more loot, and possibly even find some new items. The only thing that will keep you from replaying all day long is when your stamina runs out.

The game is fun. There is no doubt about it. Fans of the Final Fantasy franchise will really get a kick out of the nostalgia. Even if you’ve never played any title in the franchise, this game is still fun. However, it is a bit messy and disjointed, so if you don’t know what you are doing, things may seem confusing. This game is available on the iPhone, iPad, and iPod touch. Download it in the App Store today.

Final Fantasy I – VI plus FF IV: The After Years are available as a packaged bundle for $70 in the App Store. It is a good place to start if you want to play through the entire series.