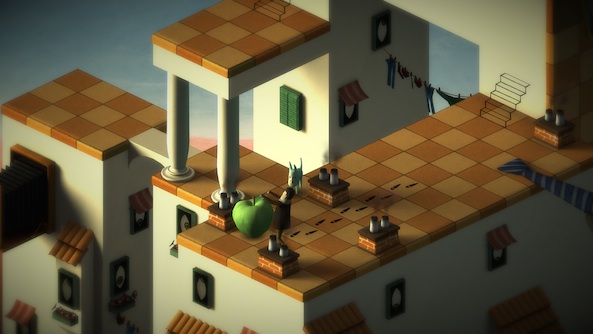 Back to Bed by Bedtime Digital Games has been named the App Store’s new Free App of the Week in Apple’s ongoing weekly promotion. This awesomely done three-dimensional indie puzzler has never gone free since its August 2014 debut on the App Store and normally retails for $3.99 a pop.

Do yourself a favor and grab the game right now before you forget about it and the price goes back up next Thursday. This one’s unlike many other freebies on the App Store, in that it does not contain advertising nor In-App Purchases to spoil the fun.

The game features a uniquely designed, unearthly dreamworld (Monument Valley comes to mind), wherein you guide the sleepwalker Bob to the safety of his bed.

You must do this by placing objects in the sleepwalker’s path, by taking control of Bob’s subconscious guardian named Subob.

There are four worlds with 15 “dreams” in each. After you’ve successfully put Bob to bed in the first two worlds, you will unlock Nightmare mode, which doubles the challenge.

To learn more about this finely crafted puzzler, I wholeheartedly recommend checking out Lory’s informative and inspirational review.

Back to Bed highlights:

If puzzlers don’t cause your blood to race faster through your veins, maybe you should check out Game of Thrones: A Telltale Games Series, which IGN just named its latest Free iOS Game of the Month.

Grab Back to Bed free of charge until next Thursday.