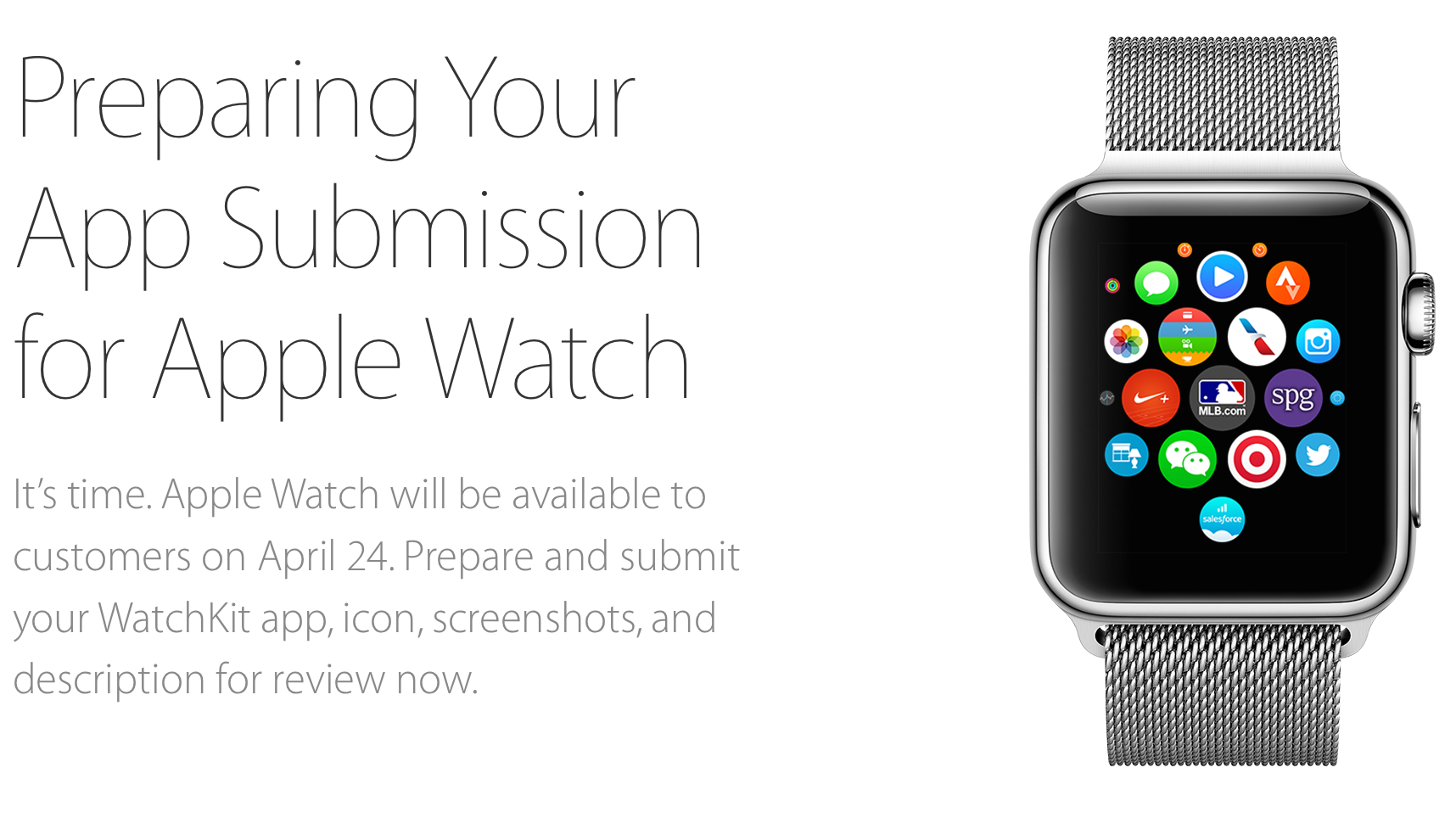 Apple today said that each and every registered iOS developer can submit their apps for the Apple Watch built on the ne WatchKit framework which rolled out in mid-November 2014.

Up until now, only a handful of cherry-picked developers were allowed to write apps for the Watch and invited to test them out on actual Watch devices on Apple’s Cupertino campus.

“It’s time,” reads a notice on Apple’s Developer website. “Apple Watch will be in the hands of customers on April 24. Get your WatchKit apps ready and submit them for review now”.

“Your app preview may only use footage of your iPhone app, and footage must stay within the app,” writes Apple. Changing app previews to show WatchKit app instead is not allowed.

Once a WatchKit app is approved and released by Apple, the existing iPhone users will receive the app update and “customers will see your WatchKit extension icon and description on the App Store”.

Extending the invitation to all third-party developers to submit Watch apps to the App Store is an encouraging sign indicating the company is confident in the device’s ability to run third-party software.

As a reminder, WatchKit APIs currently don’t allow developers to write fully native apps which execute directly on the Watch. Instead, a Watch app is basically an invisible extensions of the existing iOS 8 app which runs on your iPhone.

The extensions does all the heavy lifting and then streams a storyboard and user interface assets over Wi-Fi to display on the Watch.

Starting later this year, developers will be able to create fully native apps for the device, as per Apple’s press release from November 2014.

Although the company won’t be accepting pre-orders for the Watch before April 10 and the device itself won’t hit store shelves until two weeks later, the first wave of WatchKit-enabled app updates from high-profile developers has been hitting the App Store in the past few days.

Apple is playing it safe here.

By having a healthy selection of popular Watch apps already available in the App Store ensures that reviewers who are fortunate enough to receive pre-release review samples of the Watch from Apple don’t diss the device over a lack of third-party apps.

Apple indeed acknowledges this, noting that “a small group of people who currently have an Apple Watch will be able to use your WatchKit app before April 24,” cautioning developers to make sure their back end systems are ready.