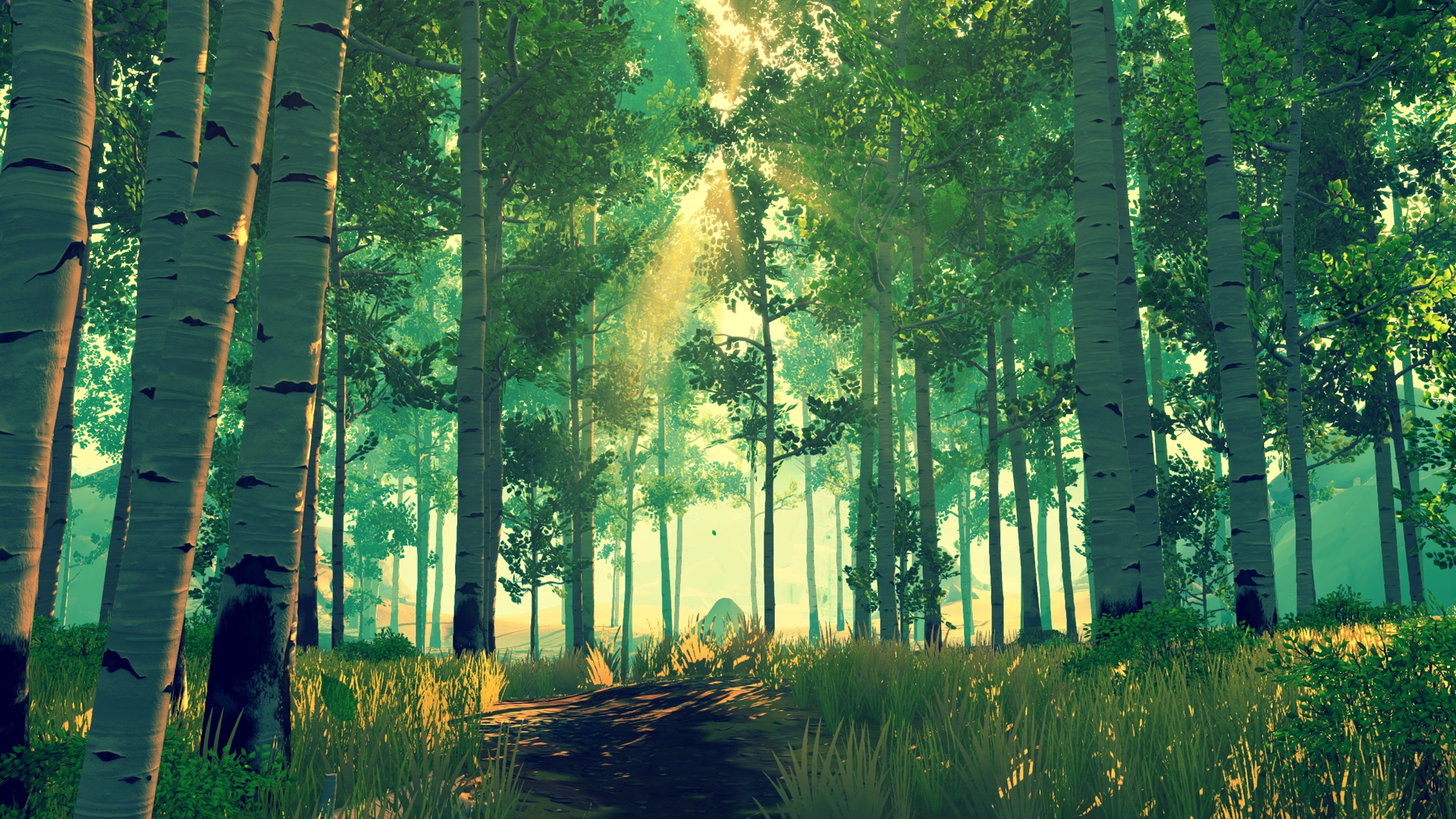 If you own a Mac, the name of developer Panic may ring a bell. What do you mean ‘no’? This Portland, Oregon based studio is responsible for some well-known Mac utilities, such as the FTP app called Transmit (now available on iOS as well) and the brilliant web editor Coda, to name but a few.

Anyways, Panic has provided the funds to launch a small but scrappy new game studio, Campo Santo. And Panic and Campo’s inaugural Mac game called Firewatch will be a sight to behold, that’s for sure.

A mere glance at this eye-candy of a game tells you that Firewatch is going to be something special, an atmospheric adventure bound to push the envelope in terms of both graphics and storytelling.

Firewatch takes place in the Shoshone National Forest, which is adjacent to the Yellowstone National Park. You play as a guy named Henry who’s retreated from his messy life to work as a fire lookout in the Wyoming wilderness.

“Perched high atop a mountain, it’s your job to look for smoke and keep the wilderness safe,” says the blurb.

Endless to say, there are always drunken idiots who’ll set off fireworks in the woods! I haven’t lost you yet? Good. 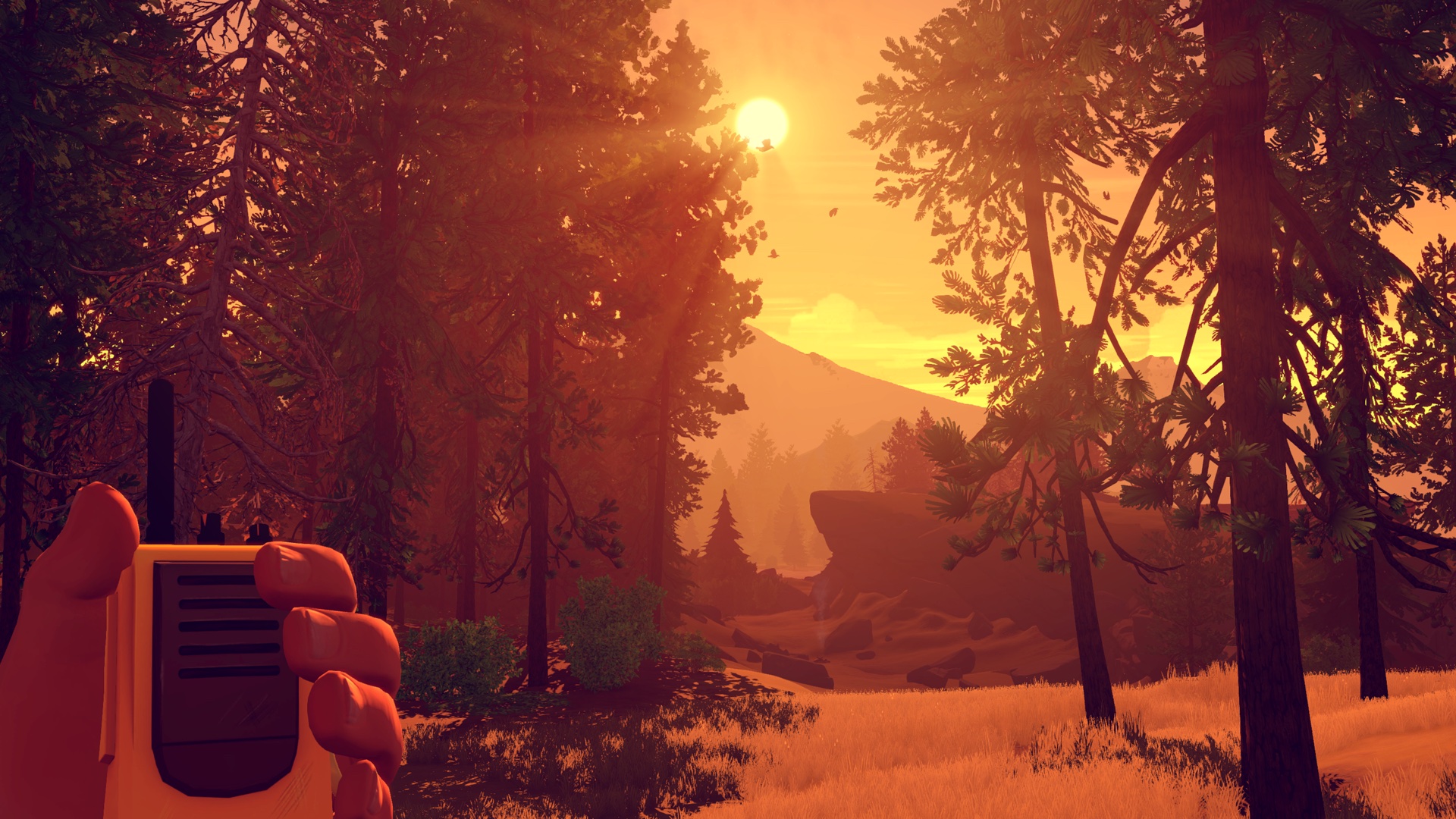 To make things more interesting, you can reach out to your female supervisor Delilah at all times over a handheld radio. She’s your only contact with the world you’ve left behind. Slowly but surely, mysterious occurrences will set the game’s story in motion.

If the plot sounds a bit dull to you, you probably didn’t get the memo that Firewatch wasn’t conceived as a mindless first-person shooter, which doesn’t make the game any less interesting — quite the contrary. 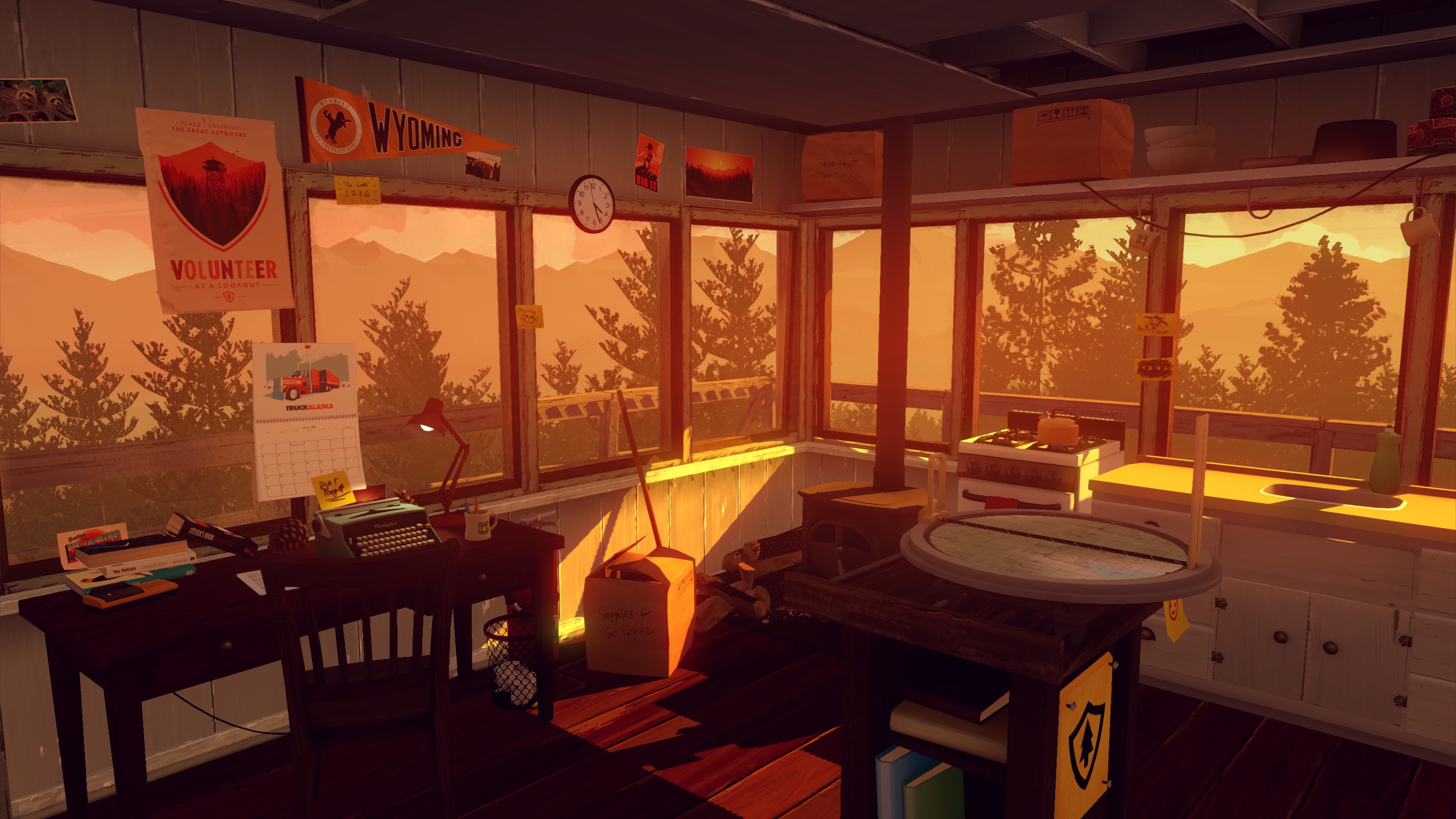 Graphics-wise, Firewatch looks absolutely stunning and unlike any open-world game you’ve played before. Its key strength, the characters, coupled to the sense of place results in some rather engaging storytelling.

From what I was able to gather from folks who played an early Firewatch build at GDC, saying they were stoked to play Firewatch would be understating it. Literally everyone I talked to told me they couldn’t put the game off because they strongly wanted to know what happens next.

Here are a few more screenshots to feast your eyes on. 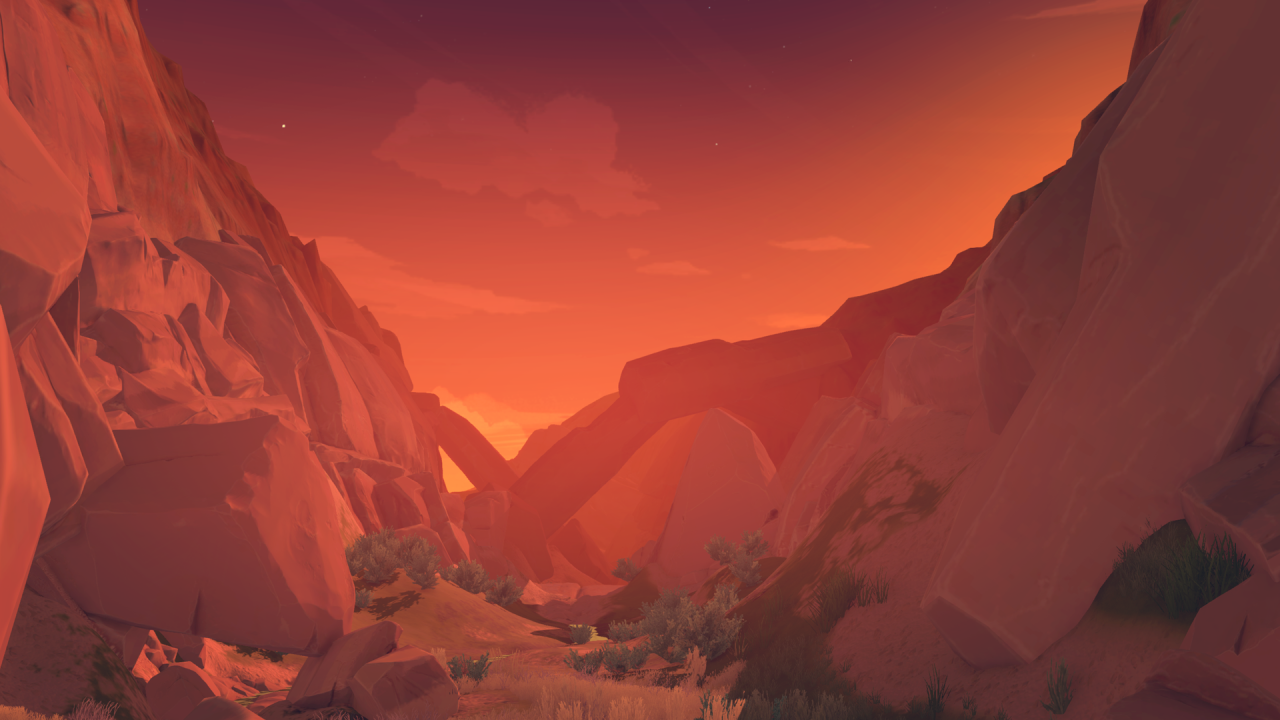 The skies the team’s been tediously making for Firewatch are beautiful, no question about it, but the technology behind it is immense. The sky in Firewatch is done procedurally — that is, in math rather than in textures. This has posed some rather difficult challenges to overcome from a technical standpoint. 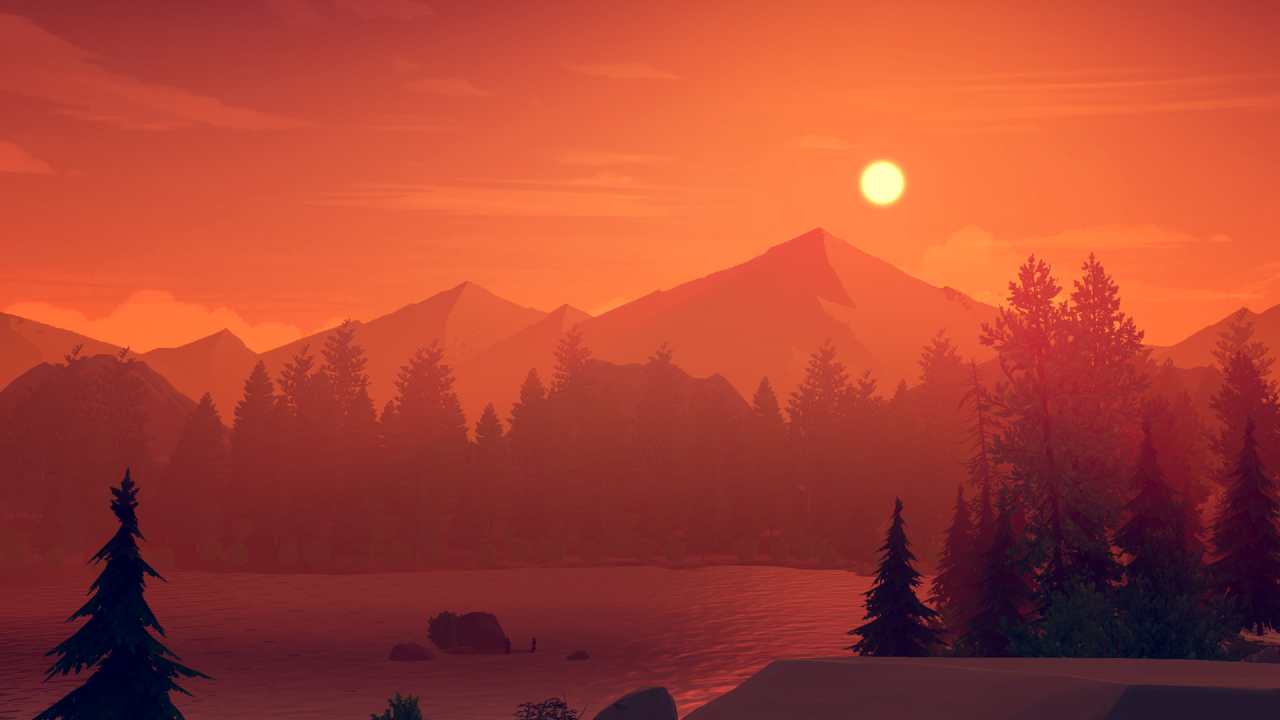 The biggest issue is that the sky had to change dynamically, an important pre-requisite for Firewatch. “Because we are mostly outdoors, we have a shadow casting sun,” said developers, which is also why they had to simulate the weather and time in real-time. 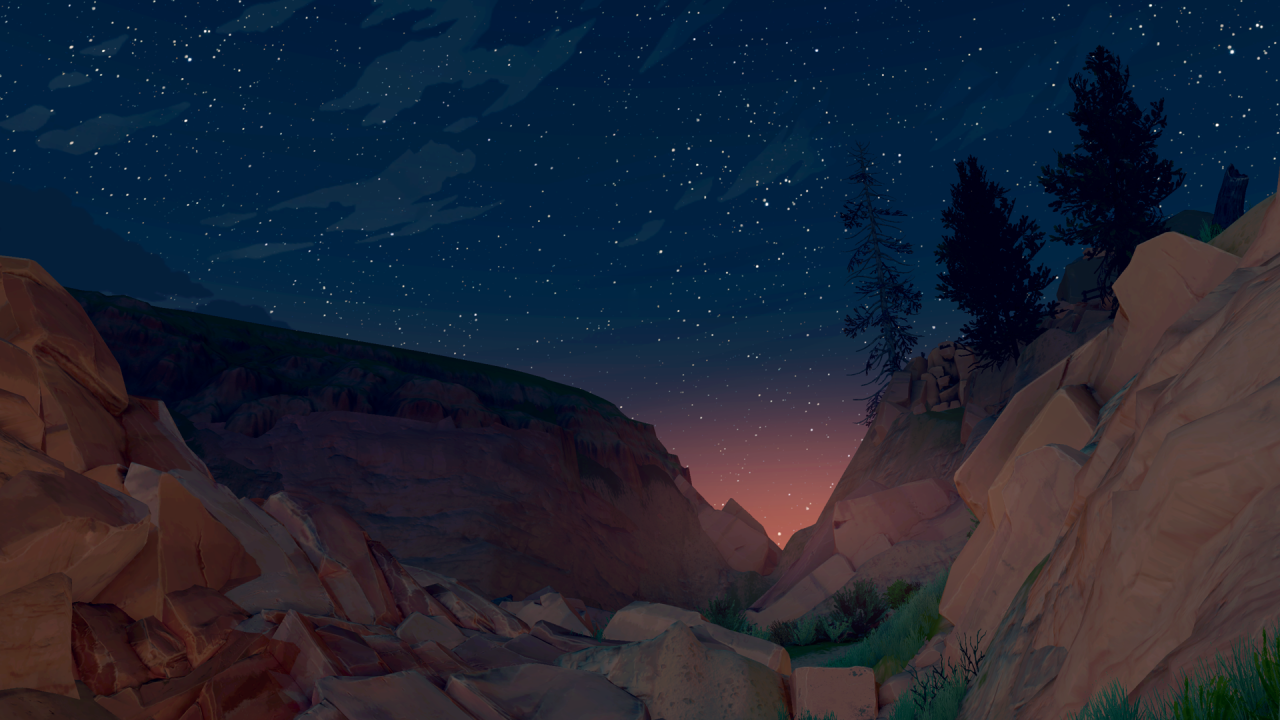 For those wondering, Firewatch is being built on the revered Unity 5 game engine which released just a month ago. Due to the game concept involving highly-detailed scenery, they combined Unity’s terrain tool with procedurally generated geometry in order to account for a lot of different kinds of collision the player needs to be able to navigate over, such as hills, valleys, streams and lakes. 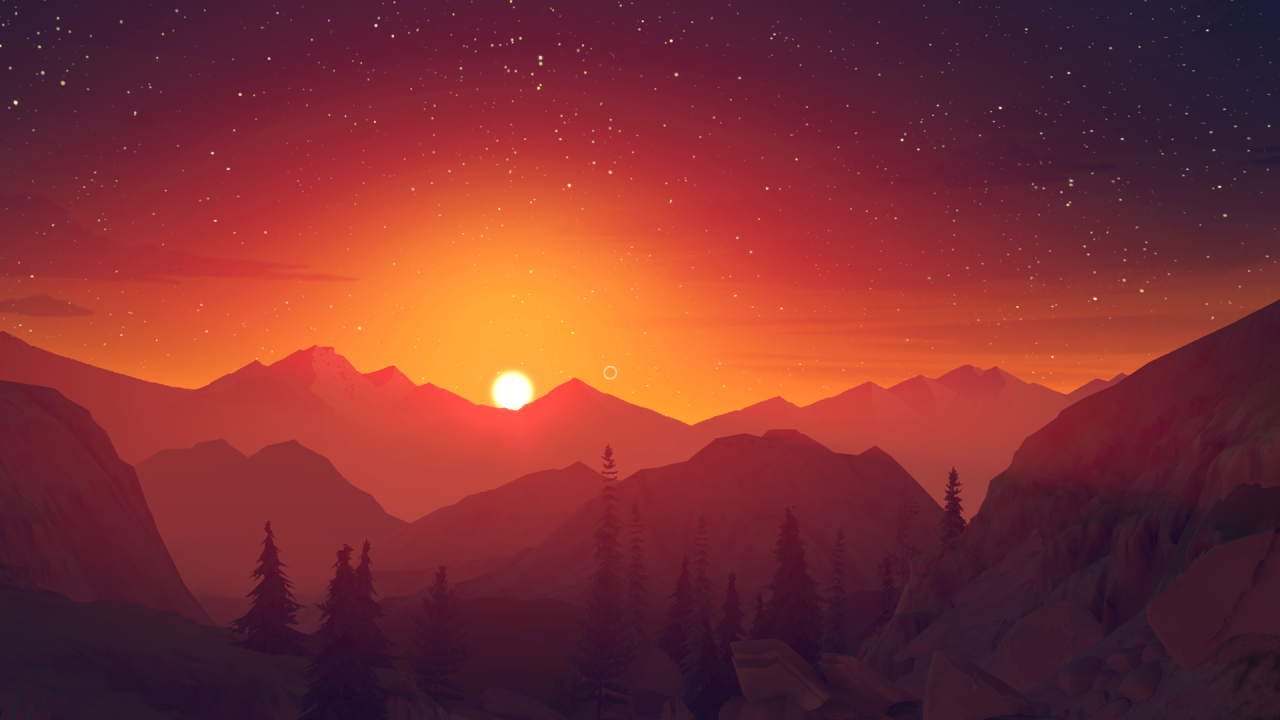 And finally, the following four screenshots depict how simulated night and day affect the appearance of in-game environment. Note that this is the same in-game scene, it’s just shaded with different time of day settings and weather conditions in mind. 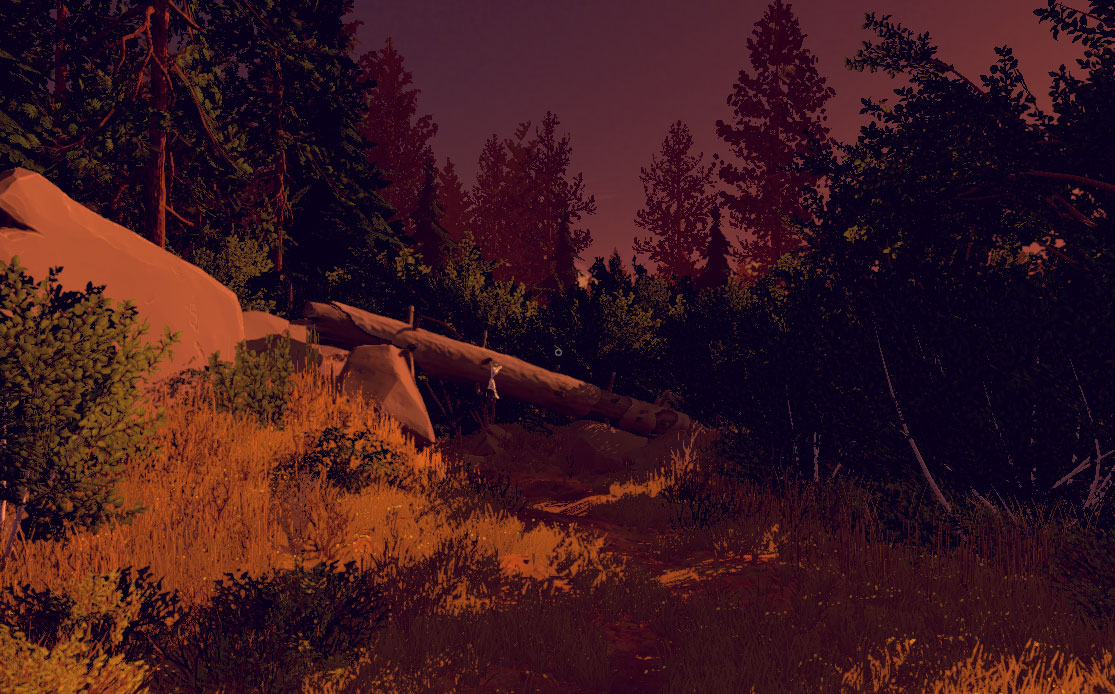 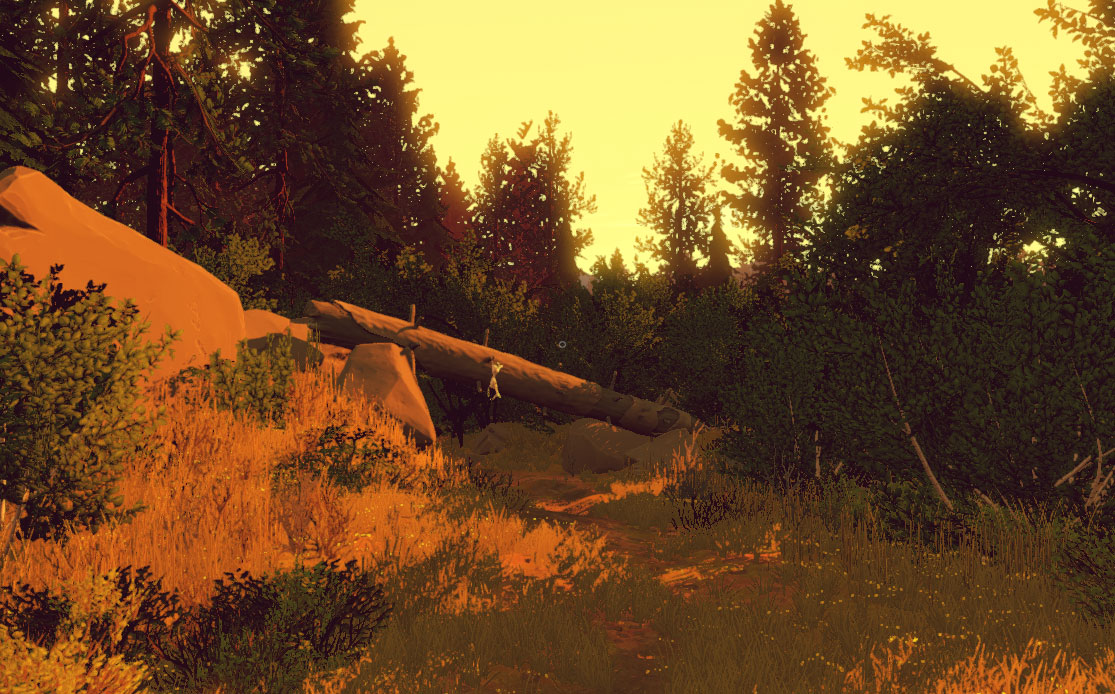 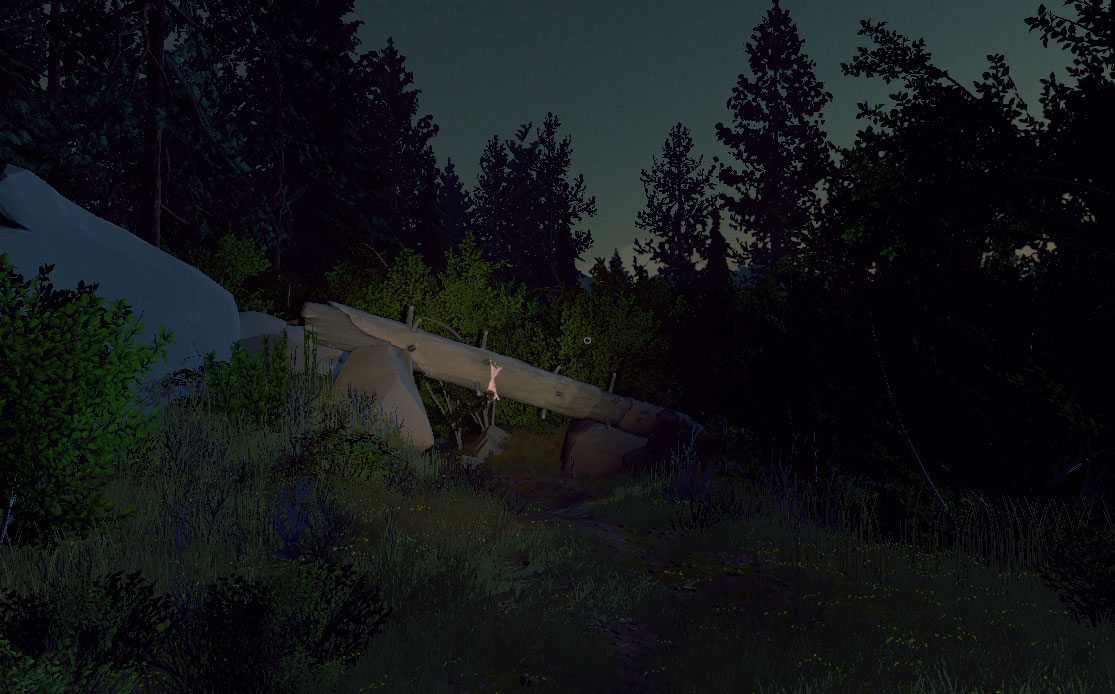 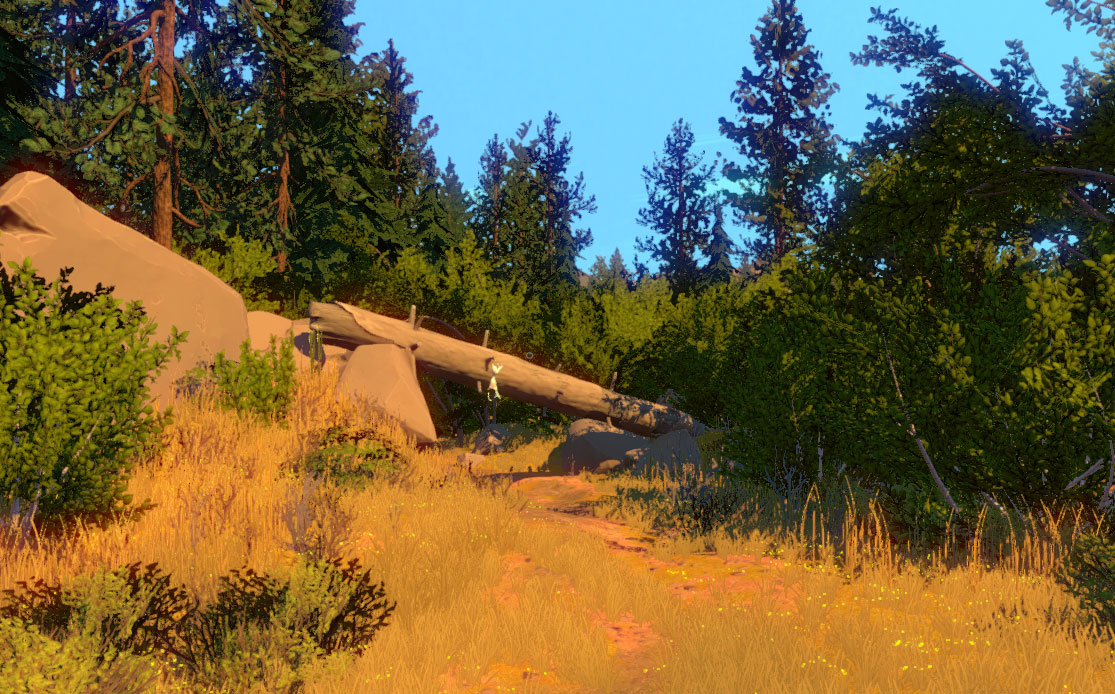 By the way, the team went from originally using Unity’s Tree Creator to creating hand-made trees and then painting those on terrain. Combined with a custom tree shader, the results are just gorgeous.

By way of try and error, they came up with the specific color palettes for Firewatch that resemble the old National Park Service posters from the New Deal era. “The colors are there to communicate a mood and a tone,” as per the team. 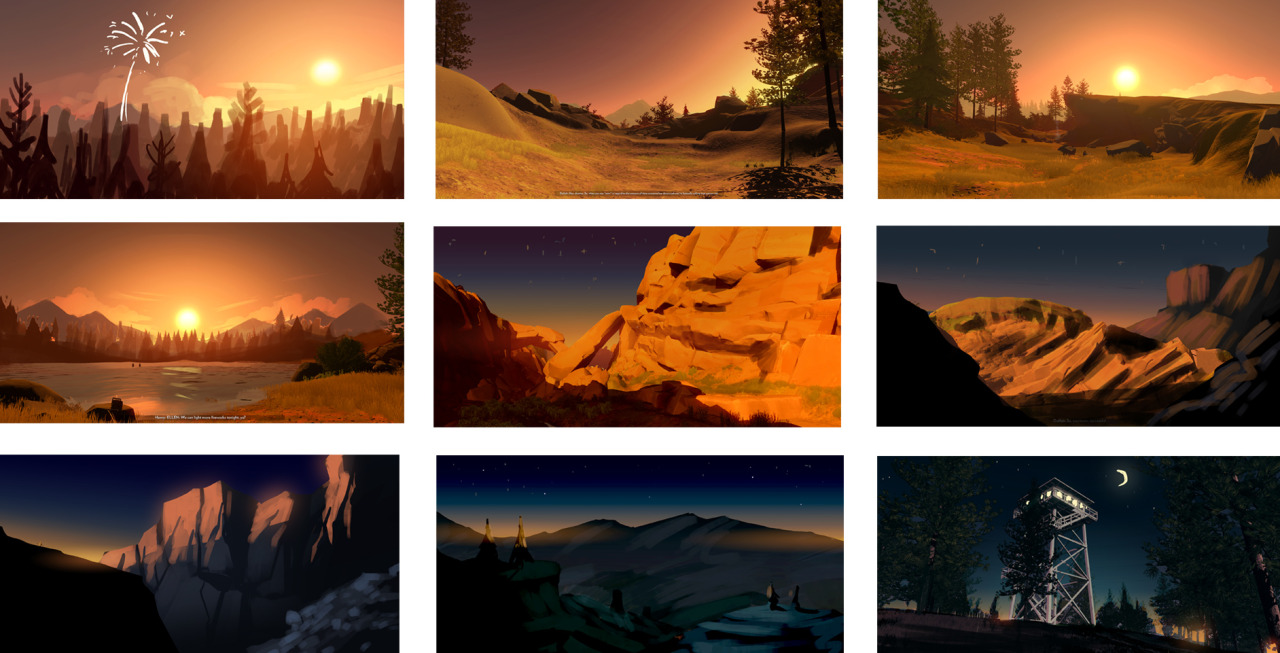 Again, you won’t see any pixelation artifacts in the sky because they’re not using bitmapped textures.

Some fun facts about Wyoming for your reading pleasure:

“Wyoming is without question a unique place and that’s part of the appeal of setting Firewatch there,” developers explain 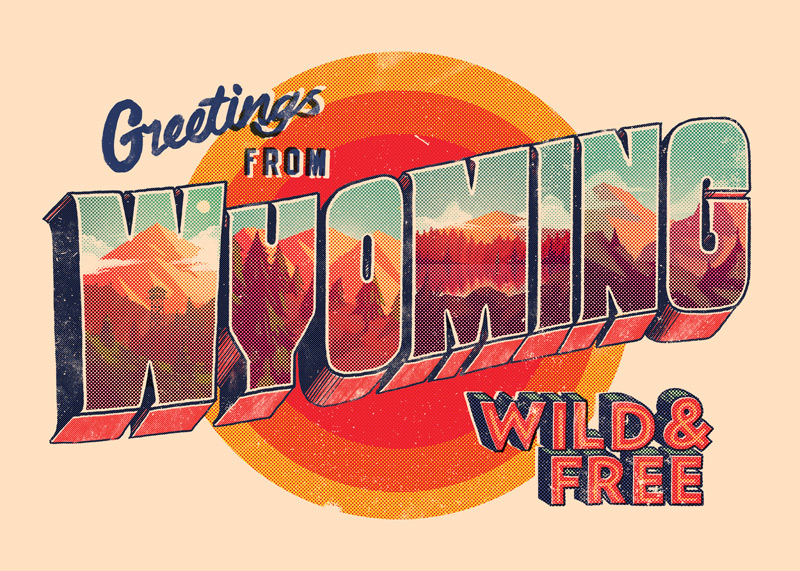 They’re shooting to release Firewatch in late 2015 for the Mac, Windows PCs and “an as-yet-undisclosed console”. No word on the iOS version though.

“Campo Santo has become extended Panic family, and we feel as strongly about Firewatch as we do any of our apps,” said Panic.

More information is available at the official game website.

Even though it’s been quite some time since I’ve played games on my Mac (my iPad has been my go-to games console for a couple years now), I’m very much looking forward to playing Firewatch.