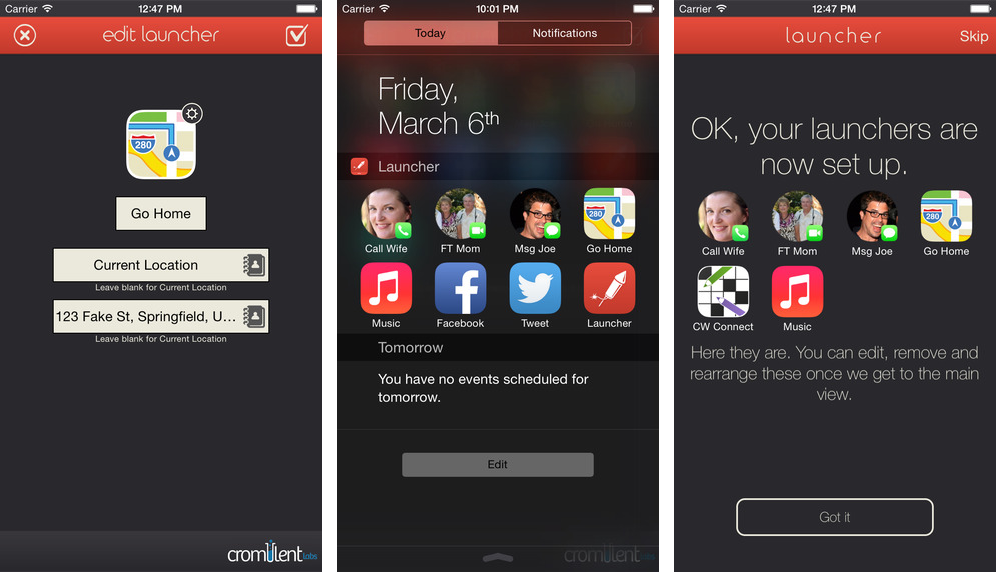 Launcher, a tremendously useful iOS application by Greg Gardner for creating app, web and contact shortcuts available from a widget inside the Notification Center, is now back on the App Store following a six-month hiatus. The update is still propagating and it should hit all App Stores worldwide in the coming hours.

The original app was short-lived.

Thankfully, the re-released app continues to offer the same features like its predecessor, indicating Apple may have softened its stance on launching other apps via the Today view of iOS 8’s Notification Center.

In addition to bug fixes and simplified layout, Launcher 1.1 has gained ability to choose a contact for WhatsApp, decrease size of the launchers and hide labels, the latter two available to Pro users only.

They’ve removed the Sponsored launcher in the free version and Pro users will notice that Sponsored Apps is no longer to be found in Apps list. Another change: Facebook and Twitter buttons are no longer accessible in the app’s main view.

Gardner told MacStories’ Federico Viticci that Apple’s review team eventually encouraged him to resubmit the software as it “had decided to accept that kind of app-launching functionality.”

“I’m wondering if they never did that because maybe they knew that they were going to revisit this decision at a later time and may reverse it”, Gardner said.

For those still unfamiliar with Launcher, the app lets you accomplish more on your iPhone and iPad by putting the most frequently used tasks at your fingertips. Each launcher can be customized with many different icon choices to stand out from those you don’t use often.

In addition to creating custom shortcuts and using its Notification Center widget as an app-launcher of sorts, Launcher lets you easily create other types of shortcuts to call your spouse, message your friend, find directions home and more.

And if you’re familiar with the URL scheme system, you can pretty much create Today widget buttons for specific app actions and chain them together. Launcher even automatically creates launchers for the people most important to you and your most frequently used apps.

Built-in shortcuts include actions to call, message, email and FaceTime cherry-picked contacts, get directions and search for places and points of interest around your current location, as well as shortcuts to websites and those that invoke specific actions within supported apps.

For instance, you could create a Launcher button to send a Yo, load a specific page on Facebook, send a canned email message, tweet, run Workflows and more.

Even though “thousands of apps” have Launcher shortcuts, not all can be supported. “Only certain apps that can be launched by third party apps are supported,” with more being added every day, Gardner explains. 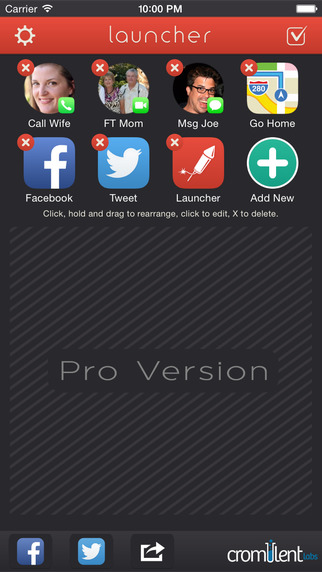 Fortunately, users have the freedom to create custom launchers for apps and actions that aren’t yet supported via URL schemes.

Launcher is available at no cost.

A one-time $4.99 Pro in-app upgrade is available for those who wish to unlock the ability to change the icon sizes and hide labels to make the widget more compact.

Launcher is currently propagating through Apple’s servers and will be available for download through US App Store later today at this link.