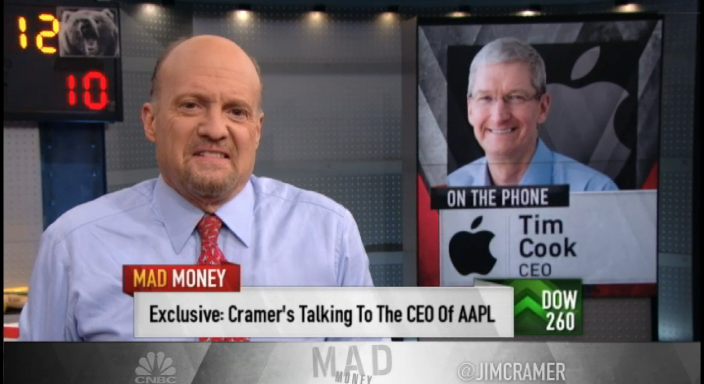 It seemed like just another episode of Mad Money, CNBC’s polarizing financial TV show, until host Jim Cramer took a call from “Tim in California.” As you’ve probably guessed by now, it was Apple CEO Tim Cook on the line, prompting cheers from a surprised studio.

Cook began the call by congratulating Cramer on “10 great years of Mad Money,” but it was clear he had other things to talk about. The first thing was ResearchKit, Apple’s medical research app platform it unveiled on Monday, which as already had over 10,000 signups.

The topic then moved onto Apple Pay, and all of the success Apple has seen with that since launching in October of last year, and then later the upcoming Apple Watch. Here’s a video of the conversation, courtesy of CNBC, if you want to check it out (sorry it’s in Flash).

If you can’t, or don’t feel like watching the clip, here are some comments worth highlighting:

Cramer: The competition, are you feeling like that you’ve kind of left it behind, or every day do you come in and say someone might have a better mousetrap.

Cook: We’re always paranoid. We live paranoid. We always want the very best product, and so if we’re not beating someone else, we’re trying to beat the thing that we have currently shipping.

Cramer: Let me ask you about where things are going. I know that the car, the home—do you think that these are the next frontiers, or is there a frontier that I’m missing? Am I not thinking big enough?

Cook: Well I think those are two big ones that you talked about. I think health may be the biggest one of all, because for years people have depended on strictly somebody else to determine their health. And now these devices in essence empower people to manage and track their own health and fitness. So I think that market is probably significantly underestimated.

Cramer: My cardiologist told me that within our lifetime, we will have an [Apple] watch that can monitor diabetes, blood pressure, maybe even detect cancer, because of the great app system you have and because of Health Kit. Do you think this is within the realm of our lifetime?

Cook: Oh I absolutely do. I absolutely do. You know, discovering and curing some of these diseases will push our life expectancy much longer than it currently is, so we’ll be able to enjoy Mad Money 50 years from now.

Although Cook and Cramer exchange several compliments during the call, the outspoken analyst hasn’t always offered Apple praise. In 2013, he ran a segment on Mad Money with the tagline “without a new product to dazzle us, I find few reasons to own APPL right now.”