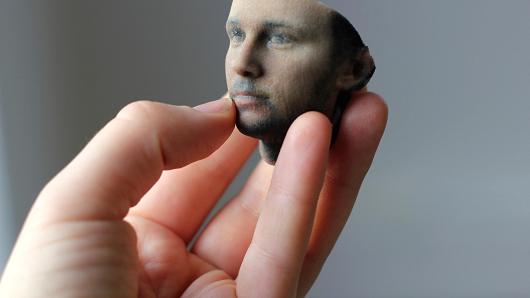 If you ever wanted a 3D printed selfie, there’ll soon be an app for that. Developer Dacuda has teamed up with Stockholm, Sweden based Volumental on the world’s first mobile application for easily creating printable 3D selfies.

The software works by capturing a video of one’s face on a tablet and is being shown off at Mobile World Congress in Barcelona, Spain, CNBC reported last weekend.

A detailed 3D selfie is created just by moving your iPad from left to right in front of your face. After creating a 3D model of your face, the app then lets you send the picture to a 3D printing company and receive a 3D version of your face in the post.

It’s compatible with iPads and iPhones from the iPhone 5 range and above.

According to Dacuda founder Alexander Ilic, the software also supports Android 5.0 Lollipop devices and above that have compatible camera software.

“We expect people won’t have a 3D printer quickly but we think the technology will become more affordable,” Ilic said in an interview.

He’s planning on launching the app in the third quarter of this year.

Like Illic’s other apps, this one will cost zero bucks and be monetized by taking a cut of revenues from the companies printing the 3D selfie.

We teamed up with Volumental to present the world's first mobile application for easily creating printable… http://t.co/vSaKSRwJhc

Dacuda currently has two apps in the App Store.

The first, called PocketScan and available at no cost, works with the PocketScan hardware and gives you real time scan feedback. The app allows instant editing and sharing of your scans, while the included speech function reads scanned text to you in the language and speed you prefer.

The other is the free of charge 3D Around app which adds a third dimension to your food photography using clever software trickery.

As for Volumental, they make tech used by leaders in orthotics and consumer fashion, including OpenNI and SoftKinetic, to provide accurate models of the human body.