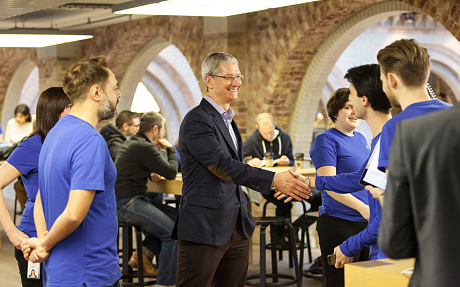 According to Cook, the Watch is designed to be able to “replace car keys and the clumsy, large fobs that are now used by many vehicles.”

Matching up Apple’s previous battery claims (“users will have to charge it overnight”), Cook said the Watch’s battery life will last the whole day and it won’t take as long to charge as an iPhone.

Of message filtering, he reiterated the device will make it much easier to prioritize, spot and react to urgent messages, such as a family emergency.

And of course, mobile payments from your wrist will be possible for Watch wearers as long as they own any iPhone from an iPhone 5 onward.

Speaking of its other uses, he likened the device to the iPhone.

“This will be just like the iPhone: people wanted it and bought for a particular reason, perhaps for browsing, but then found out that they loved it for all sorts of other reasons,” Cook told the paper.

“He did such a great job with the design,” he said. “It’s beautiful.”

According to a wide-ranging Jony Ive profile in the New Yorker, the Apple Watch is apparently Ive’s pet project.

As for its health and fitness features, we know from before that the Watch will gently tap users on their wrist to remind them to move after sitting for too long.

Now Cook cast more light on the device’s special rewards system designed to reward exercise. Folks will get credits if they exercise enough and will be encouraged to increase their metabolic targets if they meet their exercise targets consistently.

“Consumers will clearly have an incentive to wear the watch for as much of the day as possible, and even in the shower.” This is the second time we’re hearing that users will be permitted to wear the Watch while taking a shower.

Because “We’ve never sold anything as a company that people could try on before”, the Watch sales process may require “tweaking the experience in the store”, Cook told his staff at the Covent Garden store, “one of my favorite stores in the world.”

Cook, a fitness nut who gets up at 3:45 every morning to get a head start on East Coasters, charges his Watch overnight and wears it all day long because “I want to make sure I measure all my activity.”

Apple Watch demo from the man himself. Thanks @tim_cook it was great to see you! pic.twitter.com/iPOUoH1VCt

Apple is expected to discuss Watch features in greater detail at its highly-anticipated “Spring Forward” media event on March 9.

Apple CEO Tim Cook is on a world tour.

Apple has research and development facilities and offices in Israel and lately has been looking to grow its in-house chip design capabilities with new hires in the country.

“We’ve hired our first individual in Israel in 2011 and we now have over 700 people working in Israel directly for us,” said Cook in Wednesday’s meeting with president Rivlin.