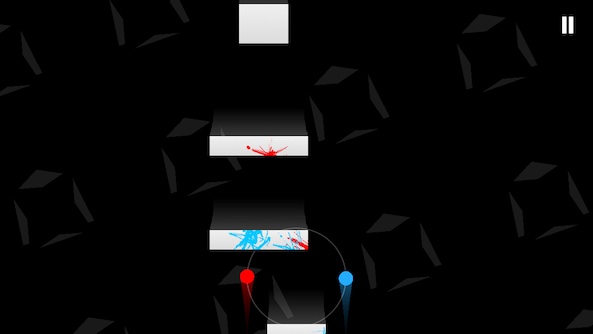 The full version of Duet Game by Melbourne, Australia-based Kumobius has just been slashed to zero bucks as Apple’s latest free app of week. As you know, each Thursday App Store editors get to cherry-pick an app or a game that goes temporarily free for a week.

This twitch reflex title was on the App Store’s Best of 2013 list and shouldn’t be missed. Easy to play, hard to master, Duet elevates the act of dodging falling blocks into something “captivating, beautiful, even profound.”

In Duet, you navigate two orbiting spheres past an increasingly complex maze of falling obstacles. As the difficulty increases, the tension mounts and a peculiar narrative unfolds. 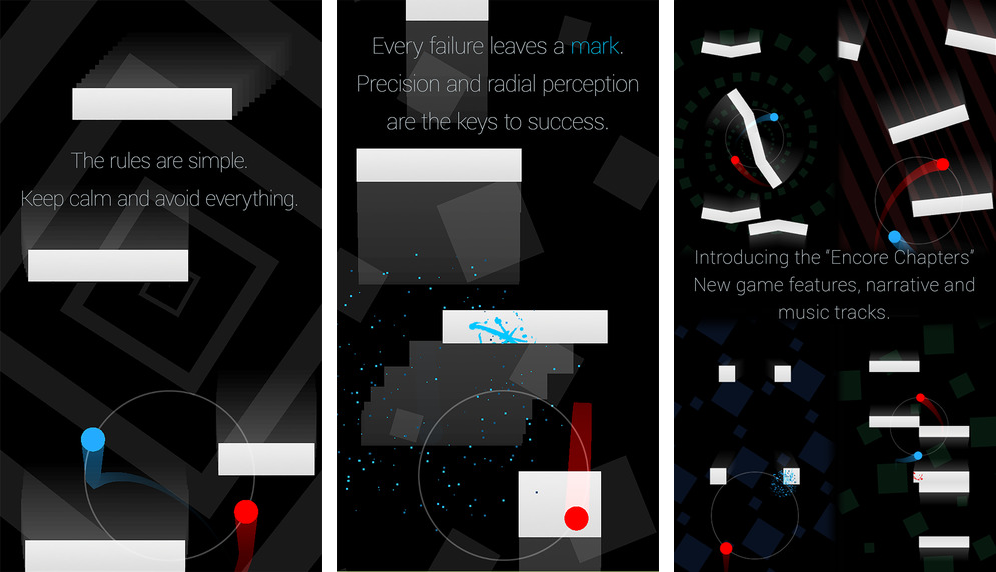 Featuring minimalistic graphics, mesmerizing soundtrack by Melbourne composer and Gotye multi-instrumentalist Tim Shiel and addictive gameplay, Duet will keep you glue to your screen. In this game, it’s paramount to keep calm and avoid objects falling from the top of the screen.

But that’s easier said than done as every failure leaves a mark so situational awareness becomes a major factor. Just touch the screen on the left or right side to rotate the vessels and avoid crashing into the falling shapes.

If you wait a second too late or move a second too soon, you will crash. The game is very challenging (though not frustrating) as it uses the basic aesthetics of precision-timing games from decades ago.

“A stirring soundtrack and striking visuals almost guarantee you’ll lose yourself in each stage, and as you learn the patterns and find yourself avoiding obstacles by sheer instinct, you’ll feel an overwhelming surge of triumph,” notes Apple.

Indeed, as our own Lory Gil said in her review, Duet should appeal to fans of traditional arcade games even though it looks more like a casual game.

The game’s update last week brought the ability to unlock a new Encore Mode with a one-time $0.99 In-App Purchase to gain access to five new chapters with a total of 30 new levels and new in-game features such as brand new music from composer Tim Shiel, voiceover to the new narrative by Jojo Petrina and two new game changing mechanics that will expand your mind.

“In the future our updates will be a mix of free challenges and separately purchased content to enable us to continue to deliver updates to Duet.” developers said.

Duet is available for the iPhone, iPad and iPod touch.

Grab it free in the App Store until next Thursday.