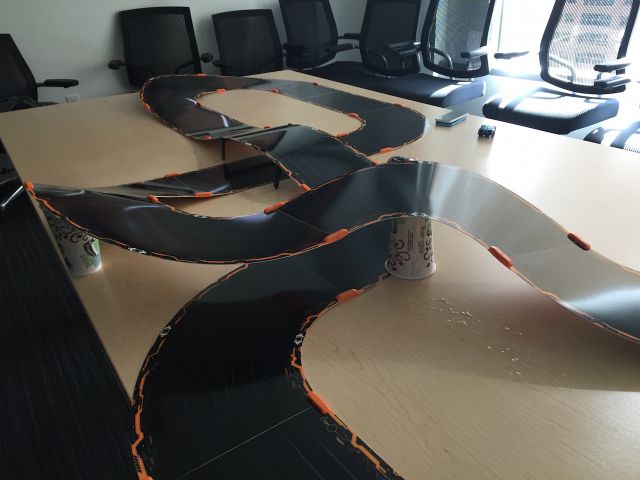 Following the success of Anki Drive, a slot car racing game which made its debut on stage at Apple’s Worldwide Developers Conference in the summer of 2013, Tuesday the company announced  the Anki Overdrive ahead of the next week’s New York Toy Fair show. Anki Overdrive is an improved version of Drive with brand new cars, customizable tracks and more.

The track pieces snap together courtesy of magnetic connectors, allowing users to create and race their own customized courses with adjustable track height, jump ramps and more.

Like Anki Drive, Overdrive lets you challenge your robotic supercars against your friends or pit them against enemy AI in the game’s campaign mode. The AI learns about your own track by driving slowly until it stores and analyzes it in its entirety.

The highly modular pieces allow for the creation of tracks that stretch around in-house objects and the stuff already on your desk, such as soda cans, water bottles, computer cables and more.

“Even though it’s a physical thing, we think of it as a video game,” Anki co-founder Hanns Tappeiner told Re/code. “If this were a video game, every time you advanced a level you’d be in a different world.”

Launching this September, Anki Overdrive will start out at $150 for the starter kit with two cars and ten modular track pieces for up to eight different track options out of the box.

Additional cars will be around $50 and additional track pieces will be sold as $10-$30 expansion packs and will include stuff like U-turns, four way intersections, jumps and more.