Alongside the release of iOS 8.1.3, Apple has also rolled out OS X Yosemite 10.10.2 to the public this morning. The firmware, which has been in testing for several weeks now, includes fixes and improvements for Wi-Fi, Safari, Bluetooth headphone syncing and more, and can be downloaded through the Software Update tab in the Mac App Store. 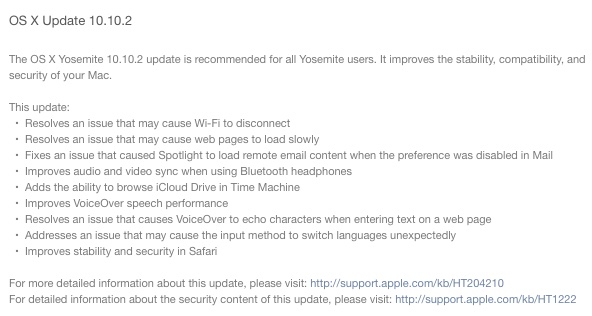 In addition to the aforementioned bug fixes, 10.10.2 fixes a security issue in Spotlight that caused it to load remote email content even when the Mail preference was disabled, as well as patches various vulnerabilities detected by Google’s Project Zero. It also improves VoiceOver speech performance, and adds iCloud Drive searchability to Time Machine.

The update is recommended for all Yosemite users as it improves the stability and compatibility of your Mac, and is just a quick download. For more information on OS X 10.10.2, click here for Apple’s support document, and for those of you wanting to know more information on the security content of the release, you can find that on Apple’s site here.