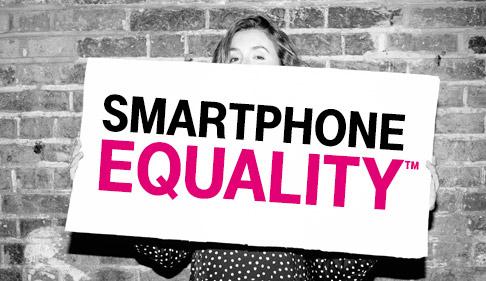 The nation’s fourth largest wireless carrier, T-Mobile, is adamant to do something about the millions of people with less than perfect credit score who don’t qualify for some of its attractive financing options.

“Carriers spent billions of dollars advertising deals and plans that half of Americans can’t get when signing up for wireless service,” the carrier said Thursday.

Enter Smartphone Equality, a new initiative created to solve that particular customer pain point, kicking off for all customers on Sunday, January 25.

So, how does it work? Read on.

“U.S. wireless carriers base their decisions about which customers get the best prices on third-party credit scores churned out by nameless, faceless bureaucracies − which in turn base those numbers on data scraped together from your distant past,” warns the Deutsche Telekom-owned firm.

The only requirement for the Smartphone Equality program is that you pay your wireless phone bill on time for twelve straight months.

If so, you’ll qualify for T-Mobile’s attractive pricing on every smartphone and tablet in its offering, including perks like no-interest zero down and, more importantly, no credit check.

You just have to pay your bills on time, that’s it.

Smartphone Equality will for sure lower the barrier for the more than 100 million American adults who don’t have a smartphone, as measured by Pew Research and the US Census Bureau, to get one.

Watch T-Mobile’s outspoken CEO John Legere laying it all out for you in his first video blog.

T-Mobile is not leaving out customers without a history.

Quite the contrary, everyone with a monthly voice plan and even prepaid customers on a Simple Choice postpaid plan will be eligible when Smartphone Equality kicks off on January 25.

T-Mobile argues that Smartphone Equality is a “saner way to evaluate credit” and I couldn’t agree more.

Their relationship with customers with a lower credit score is actually “a better predictor of future behavior than their credit history” because the wireless bill itself has become a bellwether for credit worthiness.