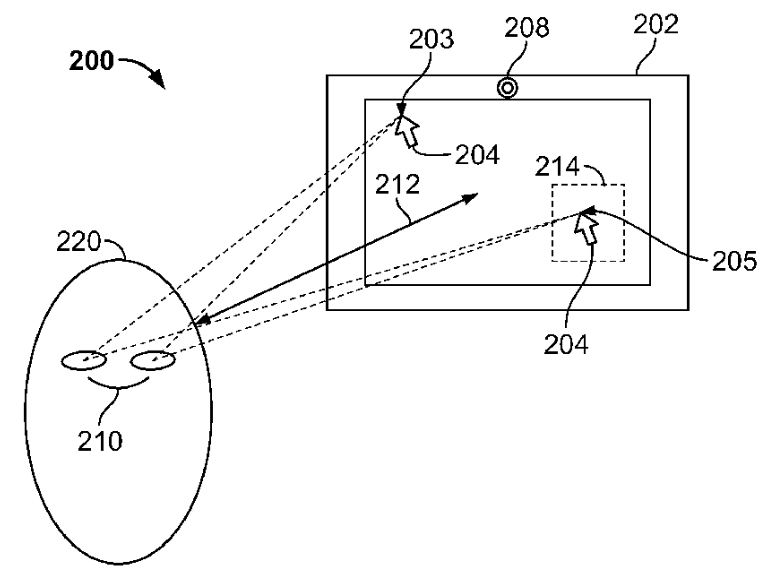 Not that Apple’s patent filings are indicative of anything more than a vague direction it might take at some point in the future, but today’s patent grant for an eye-tracking technology gives some hope that Apple is at least researching ways to enhance interactions in iOS and OS X.

Published today on the United States Patent and Trademark Office’s (USPTO) website today, the invention titled “Systems and methods for counteracting a perceptual fading of a movable indicator” is rich in both breadth and scope.

Eye tracking and gaze controls, Apple argues, could find use in your car, as well as in a future gaming console. There are even specific mentions of the Mac and iPhone as device which could benefit from gaze control.

Troller fading is an optical effect in which fixating on a particular point for even a short period of time causes objects in the periphery to begin to fade away and disappear.

“The perceptual fading of stabilized retinal images presents a particularly difficult problem with respect to the navigation of a GUI using a movable indicator whose position is controlled by eye tracking,” notes Apple.

Acknowledging that the rendering of the mouse pointer may become inaccurate due to the Troller fading effect, the invention proposes restoring the user’s perception of the pointer, or movable indicator, to counteract the effect.

The eye tracking system, Apple writes, may automatically “alter the position, appearance, or both of the movable indicator so that it is no longer a stabilized retinal image and can be perceived by the user.”

Again, components of Apple’s eye tracking system would allow a user to interact with a GUI though the patent text doesn’t go into detail describing how this might work. Samsung on its part has implemented eye tracking on its Galaxy devices in a limited fashion though critics have largely dismissed features such as Smart Scroll as gimmicks.

Originally filed in April of 2012, the document credits Apple engineer David P. Julian as the sole inventor of the patent.