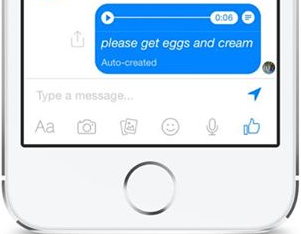 Facebook has begun testing a new feature in its mobile Messenger software that can read transcripts of received voice messages in case you don’t want to listen to them.

The company is currently testing the feature with a tiny subset of Messenger’s more than 500 million users ahead of a forthcoming launch in the near future.

In addition to Messenger’s voice transcription capability, the firm announced buying a successful boutique design firm which has created popular mobile applications and online services, including the read-later app Readability and the rising blogging platform Medium.

Building on Messenger’s existing ability which allows users to send voice clips to friends, everyone should soon be able to take advantage of voice transcripts to read the voice clips they receive instead of having to play them out loud.

“So, for example, if you’re at a concert or in a meeting, and would prefer to read a voice clip from a friend, you now can if you’re part of the small test we’re rolling out,” David Marcus, head of Facebook’s Messenger team wrote in a post on Facebook.

He did not say when this new experience might become available more widely or if the feature uses a technology from the voice recognition startup Wit.ai, which Facebook snapped up earlier this month.

Teehan+Lax founders Jon Lax and Geoff Teehan, as well as partner Dave Gillis will be joining the Facebook team later this month.

Facebook Messenger is available at no cost in the App Store.