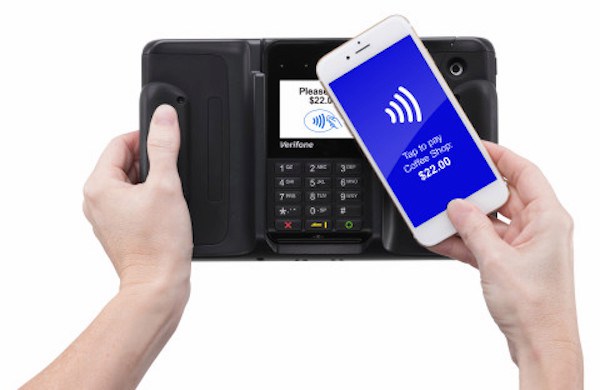 Verifone, a company that boasts it connects more than 27 million payment devices to the cloud, has announced a new point of sale (POS) system that aims to work with any smartphone on the market, and could be a huge boost for Apple to get Apple Pay more widely adopted in stores.

The PAYware Mobile e355, the newest mPOS terminal from Verifone, frees merchants from consumer technology upgrade cycles and adapts to multiple OS options, the company says. “It is a flexible, long-lasting device that can accommodate different form factors and outlive smartphone and tablet models.”

The PAYware Mobile e355 accepts all payment types, including Apple Pay, along with NFC, EMV, and traditional magnetic stripe. It features an optional bar code scanner, making it ideal for multiple use cases, and supports Wi-Fi, Bluetooth and USB connectivity.

“The prospect of having to purchase new mPOS devices for sales associates when smartphones and tablets are upgraded has been a major inhibitor to mPOS investment among retailers,” Mark Shockley, senior vice president of Mobile Solutions for Verifone, said. “Verifone’s single, modular solution will offer the ultimate in mPOS flexibility, allowing it to persist across changes in devices, even if somebody wants to make a complete switch from one OS to another.”

The magic of this POS payment option has benefits for both the retailer and consumer.

Retailers garner a future proof system that will work for years to come. Consumers have support for any mobile payment solution they choose, whether it be Apple Pay or Google Wallet.

Verifone says the PAYware Mobile e355 will be available in late summer 2015.

Verifone didn’t list any retail partners that will be first adopters for the PAYware Mobile e355.