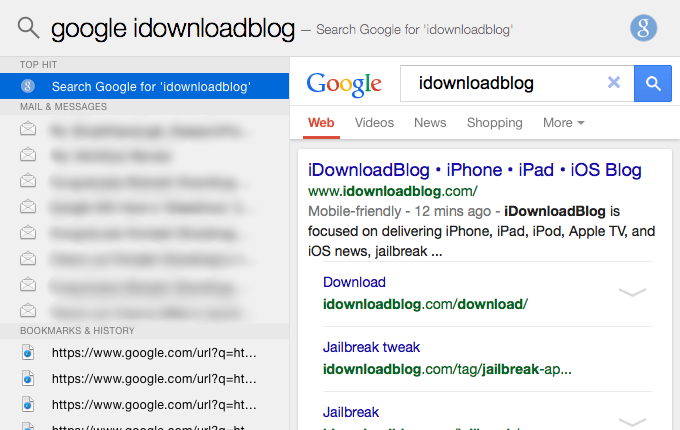 For years now, Alfred has been a staple of OS X workflow applications, enhancing search on the Mac and adding many features in the process. Spotlight search remained rather antiquated in comparison until Apple revived it with OS X Yosemite, but there’s still much to be desired. While Alfred will continue to hold its well-deserved position as a staple Mac app, Flashlight has the potential to reach far beyond the abilities of Alfred to make OS X’s native Spotlight search an incredibly powerful and useful tool.

Imagine using ⌘+SPACE as a text-based Siri, in which typing the phrase “remind me to Write Flashlight review at 2pm” or “text Mike I’m on Steam, wanna play?” will do exactly as expected. However, Flashlight not only allows reminders to be made and messages to be sent directly from Spotlight – its potential reaches much further.

Flashlight is a tiny app that doesn’t bring any noticeable functionality on its own, but its purpose is to add plugins to Spotlight that introduce some incredible features to OS X’s search bar. Flashlight’s greatest quality is that these plugins are made by third-party developers and are only limited by imagination, as anyone with sufficient knowledge of Python can create their own, extending Flashlight’s potential ability to far beyond that of Alfred. 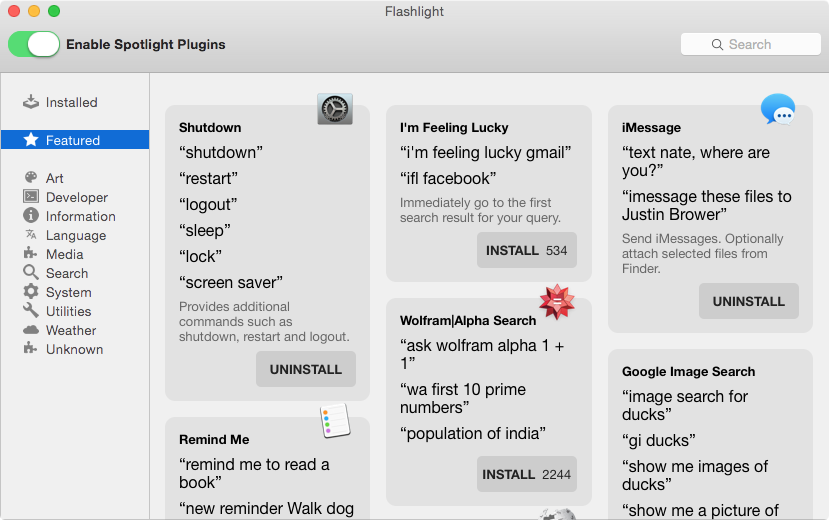 Launching the app displays several featured plugins, with many others available under their various categories. Each plugin has its own name and description, with examples of Spotlight queries that will activate the plugin’s ability. Below the description is an Install button that also details the number of downloads the plugin has received to date.

All installed plugins are grouped under their own tab, and each of these can be turned on or off individually. There’s also a master switch for disabling or enabling all Spotlight plugins. Uninstalling a plugin is a simple click, but can’t be done from the Installed tab, although the search feature helps this to be less of an inconvenience.

The types of plugins that are available vary greatly, but the convenience they add is simply extraordinary. ‘Weather’, for example, is a plugin that takes phrases such as “weather cupertino” and returns the current temperature and forecast for that location. ‘Spotify’ allows searching for an artist, album, or track, so “spotify the piano guys” brings up the corresponding artist’s page. 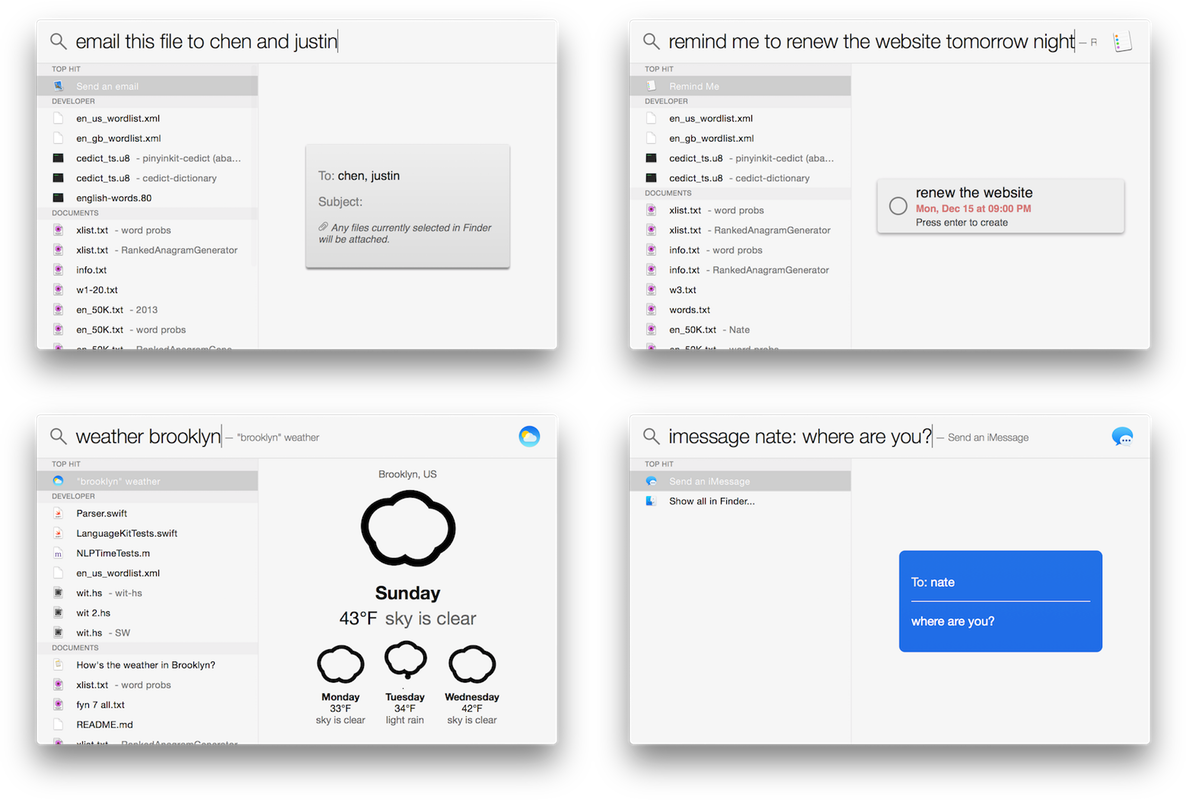 Aside from search queries, Flashlight plugins can handle system tasks, and ‘Shutdown’ is a nifty plugin that takes words such as “shutdown” or “sleep” and executes them as a system command. ‘Terminal’ runs the inputted text as a Terminal command, and ‘Shorten url’ uses goo.gl to shorten pasted links and copy the result to your clipboard. But these are only a few out of the many existing plugins and, I hope, the many that are to come as third-party developers put a bit of time into making Spotlight even more powerful for users.

The code for Flashlight and its plugins are available on Github, making this project open source and providing many examples of the code behind a plugin for developers, making it easier to begin creating new plugins for Flashlight. Nate Parrott, the developer behind Flashlight, is still highly active on the project, so expect many refinements in the future. 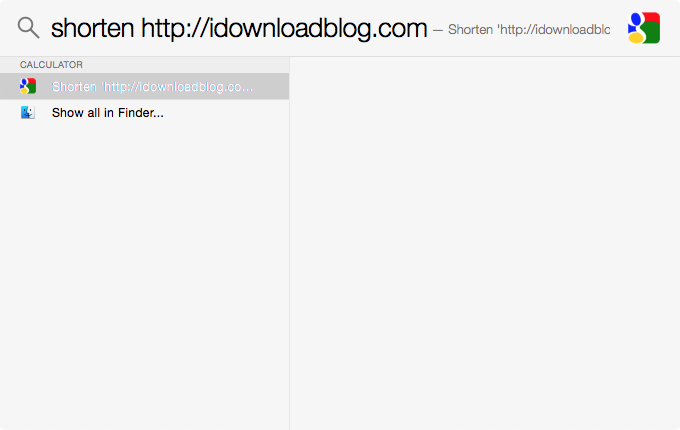 In testing Flashlight, I noticed a rather small issue that would convert all the text to lowercase when sending an iMessage or creating a new reminder or calendar event, but the developer is aware of this issue and a fix should be available in a coming update.

Other than that, however, there’s little to dislike about Flashlight. It doesn’t alter the aesthetics of Spotlight and retains the native feel, and the additional functionality it brings is nothing short of incredible. It’s like a text-based Siri came to OS X, but adding third-party developers to the equation takes it to an entirely different level.

You can download Flashlight for free, as well as browse its plugins, at the developer’s website. Head to its Github listing if you’re interested in creating your own plugin for Flashlight.

What do you think of Flashlight? Which is your favorite plugin? Do you have any plugin ideas that a developer might be interested in materializing? Let us know below.