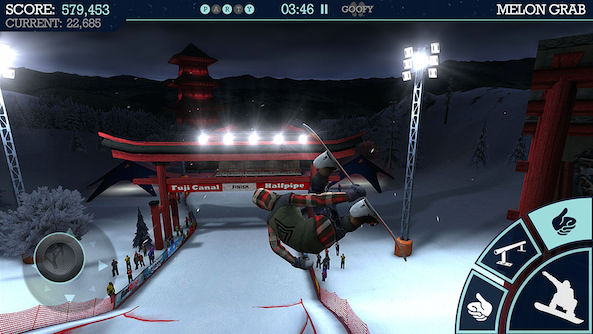 Snowboard Party is a half-pipe style trick game where players rack up points for grinding, nose grabs, and performing tricks in mid-air. Would I be going too far if I called it extreme mobile gameplay? 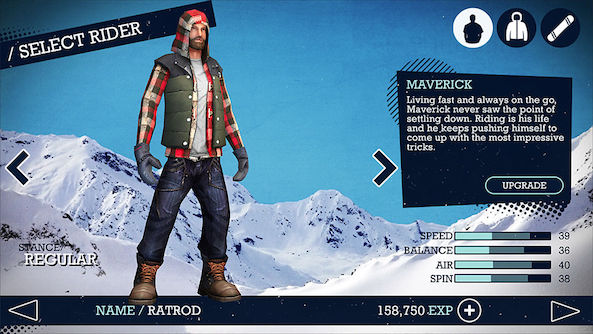 Players select their boarder from 11 different unlockable characters and customize the look with different outfits. Then, select from 35 different boards. Aside from the default swag, characters, boards, and outfits can be unlocked using experience points that you earn during your runs. If you don’t want to wait until you’ve earned enough points to unlock new characters, outfits, and boards, you can buy them with in-app purchases. You can upgrade your boarder’s speed, balance, and abilities with experience points as well.

Once you hit the slopes, you’ll be presented with a number of different usable items along the course. Grind across tree branches and rails, jump over snow ramps, and perform tricks off of the half-pipe.

The game consists of three modes. Freestyle lets you perform all the tricks. It features multiple man-made or natural objects to execute your tricks from. Big Air earns you the most points for performing tricks off of high-speed jumps. Halfpipe is where players stick to the tricks using nose and back grabs. 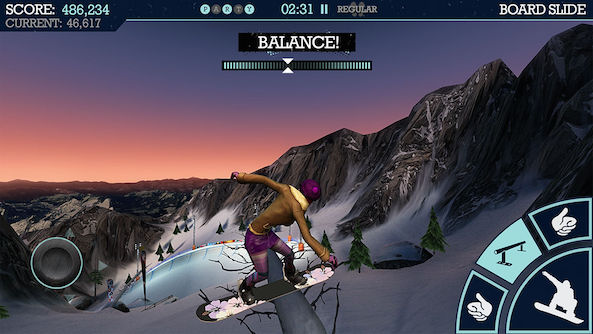 The control scheme is made up of a virtual joystick on one side and action buttons on the other. Tap to jump, hold down the grind button to keep your balance on rails, and touch the grab buttons at just the right moment in order to stick the trick.

There are 15 courses that represent real life locations, like the Rockies, Alps, and the highest mountains in Japan. Players can master more than 50 unique tricks that they can mix up to make hundreds of combinations, which earn the highest points.

No snowboarding game would be complete without the obligatory epic soundtrack. This game features music from Closer, Jack Counteract, Minds Without Purpose, Mr. TaBoo Timmons, No Blitz, Paul Spencer and the Maxines, Pear, The Pinz and We Outspoken. If none of these bands are your cup of tea, you can also switch over to your device’s music library. Personally, I prefer listening to JFA while I ride the rails.

Snowboard Party is available on the iPhone, iPad, and iPod touch for $1.99. Download it in the App Store today.

What do you think of Snowboard Party? Let us know in the comments below.