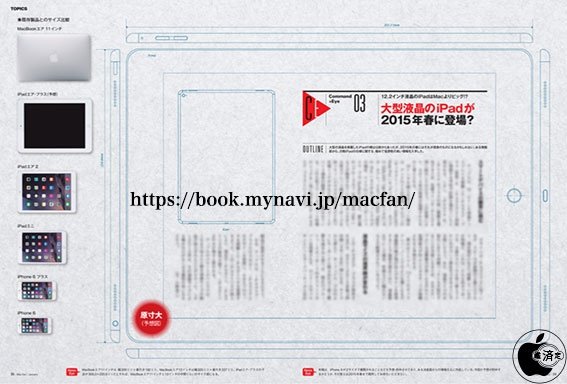 Japanese magazine Mac Fan has leaked what appears to be the blueprint of what is referred to as the 12.2 inch iPad Air Plus, reports Macotakara. According to the January 2015 edition of the magazine, iPad Air Plus, as it is referred to, will be 305.31 mm x 220.8 mm x 7 mm and will be powered by the A9 processor. The device which has now long been rumored could be scheduled to ship between April and June 2015.

Although rumored to fit a 12.9 inch screen for a while, recent reports made mention of a 12.2 inch screen and a 7 mm thickness. As for the estimated debut of the device, well regarded analyst Ming-Chi Kuo recently reported that manufacturing issues could delay the iPad Air Pro to the Spring of 2015.

Mac Fan also shared additional details about new features for the larger tablet, specifically that it might sport no less than four speakers, each speaker being placed on each side of the device.

Finally, the publication noted that iPad mini 4 will be powered by an A8X processor, have the same design as the current iPad Air 2 and that iPad mini and iPad mini 3 will be removed from Apple’s line-up. There is no date estimate for this device but it would be hard to imagine this happening until the Fall of next year. The claim that Apple may discontinue iPad mini 3 is also hard to believe.

While more and more credibility is added to the rumored device, it’s still too early to really make anything out of these rumors, which is why we recommend taking them with the proverbial grain of salt.