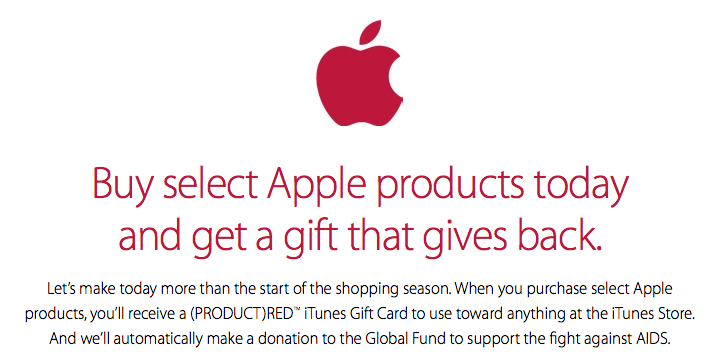 Apple this morning kicked off its Black Friday sale with $25-$100 (PRODUCT)RED iTunes Gift Cards on qualifying Mac, iPhone, iPad, iPod, Apple TV and Beats by Dr. Dre purchases. Once your iTunes Gift Card has been redeemed, you can use your iTunes credit toward any purchase on the iTunes Store, including media and apps.

Apple’s never been one to stun with deep Black Friday discounts and this year, as you can see for yourself, is no exception. The promotion is valid today only and includes both Apple retail and online stores.

Apple previously said it will donate a portion of retail sales on Friday, November 28 and Monday, December 1 to the Global Fund to fight AIDS.

For other notable promotions, check out our running list of the ultimate Black Friday deals and apps and games on sale this week.