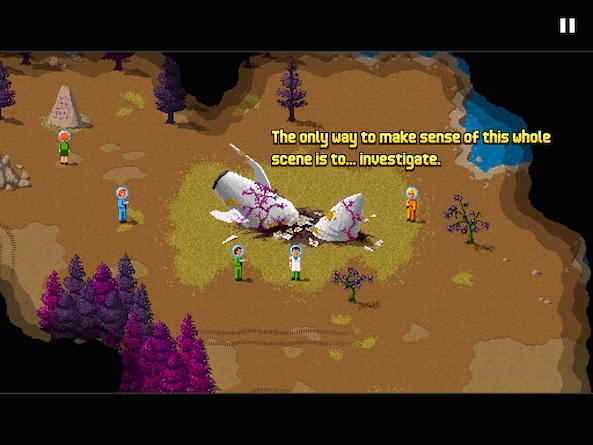 In the 1990s, point-and-click adventure games were really hitting their stride on desktop computers. It may have been the only time when there was a chance that PC gaming had the potential to overtake console gaming in popularity. Now mobile gaming is filling that spot.

Space Age: A Cosmic Adventure is a science fiction set quest in the 1970s about a group of space travelers that land on an alien planet. Your job is to help this story unfold by completing missions. We’ve got an in-depth game review of Space Age for your reading pleasure today.

Because this game is based on 1990s technology and set in the 1970s, it uses retro pixel graphics to remind you that you have stepped back in time. However, the puzzle solving doesn’t step back with the graphics as players are presented with some fairly current style challenges.

This is a story-heavy adventure. Players will have to sit back and relax as many cut scenes play out. Some scenes can’t even be skipped, so don’t think you’ll be able to rush through this journey. Tapping on a character will trigger a conversation that is important to the next adventure and can sometimes include helpful clues to get your where you need to go.

Each level has a number of additional achievements that will score you special rewards. I’m not totally sure what they are for, but I love getting them. 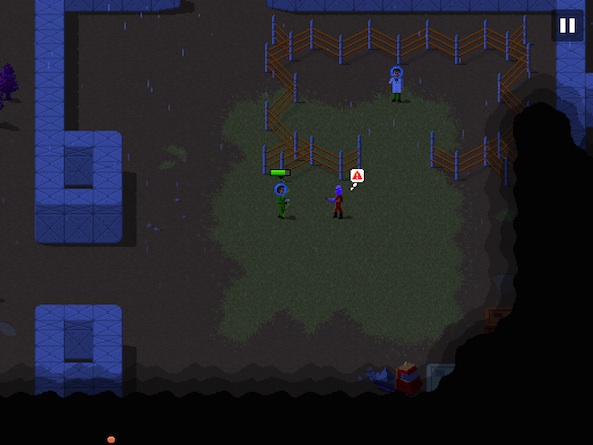 Players start off on an alien planet in a story set in 1976, which is the future. At least, in this story it is. The characters are dressed in brightly colored suits with fishbowls for helmets. As a private on his first space mission, you learn that you are part of the Green Team, which includes scientists and military on the planet Kepler-16. As the story unfolds, players discover ruins, find life, reminisce about the past, and try to save the future.

The landscape is covered by the traditional fog-of-war shroud that is unveiled as you walk around. Even though you may have orders to follow the path, it doesn’t do any harm to explore a bit and find out what the planet is hiding. You may discover some interesting etchings, or even another living being.

When you do find something interesting, tapping it will reveal a blue triangle. You may be able to pick it up, read it, or interact with it in some way. Tapping other characters may start a conversation, or get you a reprimand that you need to get back to your mission.

On each level, players must complete one or more missions, like finding the doctor or getting back to the ship. However, additional missions will reveal themselves and help unfold the story.

The missions are their own puzzle adventure. On one level, players must avoid getting noticed in a stealth-like challenge. On another level, you must first find an item to use on another area in order to move to a new location. One challenge has you in control of a dog trying to lure soldiers away from their post.

Most of the game, however, involves talking. After every important action, and sometimes in between those, a dialog takes place that reveals more about the main character and the planet the team is researching. The last thing you would call this game is action-packed, but you would call it an epic adventure story. 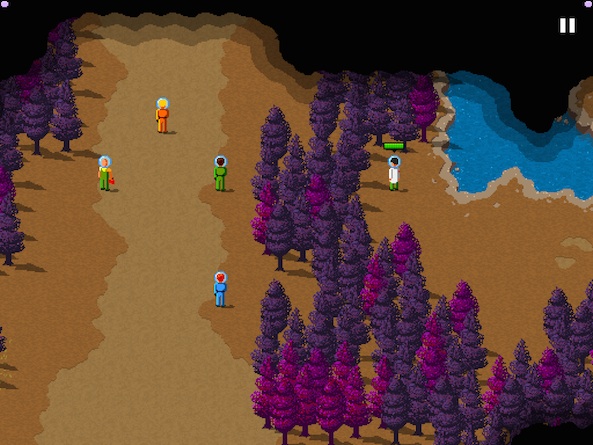 This game reminds me of point-and-click adventures from long ago. Instead of being bombarded by fast-paced action flying in from all sides, you can sit back, relax, and take this game in like a novella.

I love trying to figure out what the special achievements are. Sometime, the name doesn’t give any clues as to what you are supposed to do, so you’ll replay the mission until you get it.

Even though this is based on the point-and-click game mechanics, I’d love to be able to use a virtual controller instead of having to tap the screen every time I want to move.

Space Age: A Cosmic Adventure costs $3.99, which in the mobile gaming world might seem pricey. However, it really does bring back fond memories of PC gaming from my youth, so for the price of a fancy holiday coffee, you can rekindle your love of adventure games and science fiction. There is an element of replay as well. If you don’t figure out an achievement on one mission, you can replay it to find it and earn the reward.

This game isn’t for everyone. There is almost no action at all. It is all about exploring the landscape, completing missions, and unfolding the clever story. If you don’t have a fondness for this type of mechanic, you might think it is too slow. However, fans of the genre will see just how spot-on the game’s homage is to traditional adventure games of 20 years ago. This game is available on the iPad, iPhone, and iPod touch. Download it in the App Store today.

Alone in the Dark is one of those types of adventure games from the 1990s, although it is much scarier than this fun story.