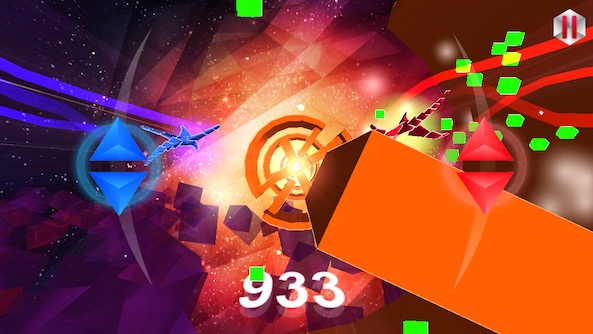 Twitch games have definitely made a return to the gaming world. We can attribute much of that to the mobile industry. People don’t always have time to dedicate to long, story-driven games that require a lot of attention. Sometimes you just want to dive into a fast-paced game that will give you an adrenalin rush and be done in a few minutes.

Dracos is a twitch game that requires fast reaction time and at least some level of ambidextrousness. You’ll need to be able to control two different dragons doing two different things at the same time. Can you handle two dragons at once?

Players control a red and blue dragon as they fly through a series of obstacles. Each dragon flies on opposite sides of the screen and players must move them up and down to avoid crashing into the oncoming labyrinth. If only one dragon needs to move at one time, you’ll be flying smooth. However, the moment both dragons must move simultaneously, you’ll be split down the middle, trying to make both fingers work at once. It’s harder than you’d think. 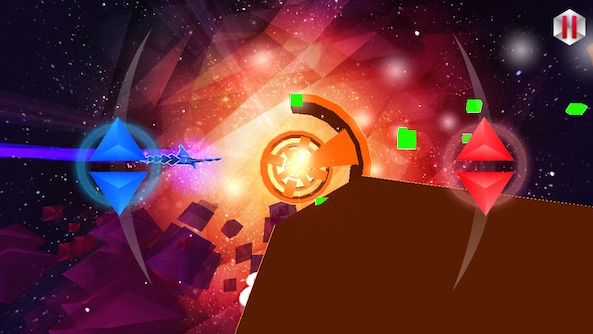 The up/down control mechanism involves a button that sits on a virtual rail system. The curve of the rail can be faintly seen when you place your fingers on the buttons. You can raise or lower the dragon by dragging your button along the curve. The dragons sail along the space scape, leaving neon trails behind them. As they zoom through the cylindrical obstacles ahead, they seem to be floating on the stars.

Your job is to avoid the buttresses and outcroppings as you fly through a series of cylindrical structures. Much of the time, you’ll be focusing on rotating the right-side dragon, which is nice for a right-handed person like me. However, the dragon on the left will get his share of the work, too. Plus, it only takes about 30 seconds before things are moving so fast that you’ll have to work both dragons at once, which is where it all starts to fall apart.

In addition to maneuvering around the structures, players collect green cubes that add points to the overall score. Your final total will be dependent on how far you made it combined with how many point cubes you collected. You can share your score to Game Center to compare it with your friends’ scores.

This game is pretty hard. I don’t think I ever managed to reach 1,000 points. At the same time, though, it is a fun game that pulls you back in, again and again. You’ll get that itch to try one more time to get a better score than the last time. It is a downward spiral (a two-dragon spiral, even).

Dracos is available on the iPhone, iPad, and iPod touch for $0.99. Download it in the App Store today.