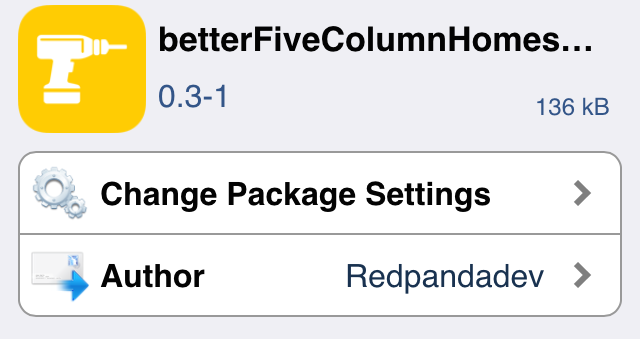 If you’re looking for a way to add a fifth column to your Home screen app icon layout in iOS 8, then you may want to check out this recently uploaded tweak called better Five Column Homescreen. This tweak is from the same developer that brought us betterFiveIconDock, and it does just as it states—adds a fifth column to the Home screen on iOS 8 devices.

The result is pretty much as expected—the existing icons are repositioned and proportioned to fit an additional column. Why does the developer insist that his tweak is “better”? Mostly because of the improved spacing mechanics employed by his release. Have a look inside to see what it has to offer.

After you install the tweak, you’ll be able to feature 30 app icons on each Home screen page at the same time. That, of course, doesn’t even include the dock, which can add an additional five icons if you use the developer’s betterFiveIconDock tweak.

Again, the great thing about this tweak is how well the app icons are spaced and proportioned to fit while in portrait mode. It looks so good that you almost forget that an extra column has been added to the layout.

If there’s one gotcha that happens with this tweak, it’s when you place your iPhone 6 Plus into landscape mode. There’s simply not enough vertical real estate in landscape mode while on the Home screen to make things look right. But this problem applies primarily to 6 Plus users, or users who plan on using a landscape mode Home screen tweak on their devices.

If you’d like to give betterFiveColumnHomescreen a try, then add the following repo to your Cydia sources:

Once you do, you’ll see the appropriate package, which can then be downloaded and installed on your device. There are no options or settings to configure after installation, just install and go.

What do you think about betterFiveColumnHomescreen? Will you be taking it for a spin? Let me know your thoughts down below in the comments.