Retailer Sam’s Club will offer the iPhone 6 starting at $99 for the 16GB version on November 15th, according to a leaked flier obtained by GottaDeals. Black Friday doesn’t begin until November 28th, but apparently Sam’s Club is wanting to kick things off early, to presumably capitalize off the demand.

The flier, not yet confirmed by Sam’s Club, also covers the 64GB version of the handset ($199) and the 128GB model ($299) – $100 off each model on two-year contract. Surely Sam’s Club won’t be the only retailer offering such a deal, however if you have a Sam’s Club membership, it might be your destination for the iPhone 6 while you’re picking up a bulk load of your favorite shampoo. Each store will have only 40 – 50 units on its stock shelves, so you may want to visit early. 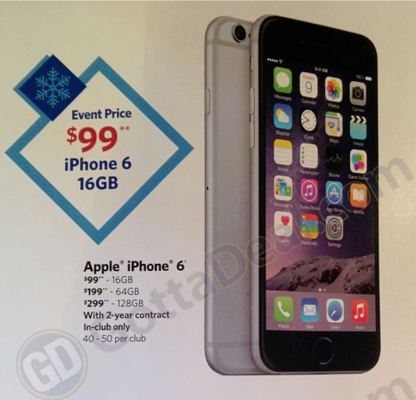 The wording “Event Price” when describing the iPhone 6 sale in the flier may suggest the sale price is good for one day only. Furthermore, the promotion is also discounting the 2013 iPad Air by $100.