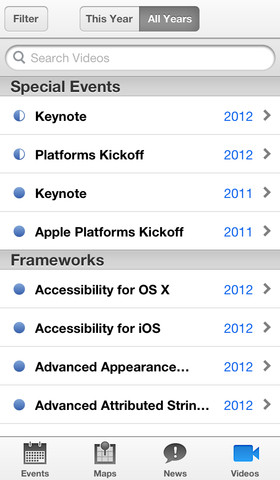 Apple on Friday issued a small update to the official iPhone and iPad application for the Worldwide Developers Conference, its annual pilgrimage for developers which traditionally takes place each summer at San Francisco’s Moscone West.

Now sitting at version 2.1.3, the updated software brings out support for the 4.7-inch iPhone 6 and 5.5-inch iPhone 6 Plus screen sizes.

Furthermore, it resolves a bug that would crash the software at launch on devices running iOS 8 or later.

WWDC is available free in the App Store.

Here’s your changelog for version 2.1.3:

The app is not limited to Apple’s registered iOS developers so anyone can use it to stream or download videos from current and previous WWDC sessions (your play position is synced across devices so you can start watching on an iPhone, for example, and pick up where you left off on an iPad).

There are options to send feedback on content and speakers for each session, favorite certain items, browse times, locations and descriptions for sessions, labs and special events and what not.

And if you’re going to attend WWDC 2015, the app supports Passbook for faster check-in at the event.