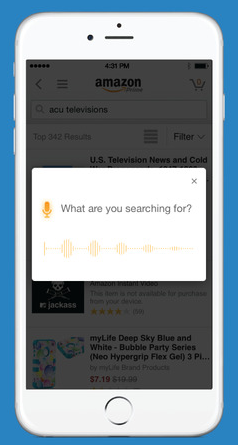 iPhone 6 related updates for your favorite apps continue to roll in more than a month following the release of Apple’s bigger handsets.

Following Plex’s iPhone 6 update earlier this morning, both Amazon and Path have now refreshed their respective iOS applications with native display support for the 4.7-inch iPhone 6 and 5.5-inch iPhone 6 Plus models.

If you’re an early iPhone 6 or iPhone 6 Plus adopter, you know why these updates matter: not only do optimized apps look crisp as anyone would expect, but also take advantage of greater pixel count to display more content, thereby requiring fewer taps and less scrolling.

If you use Amazon App, you’ll no doubt appreciate another feature addition: the ability to search Amazon’s vast product database with your voice. By the way, the online retail giant was among the first developers on the block to roll out Touch ID support so yes, you can authenticate yourself into Amazon App with your thumbprint.

The 20.4-megabyte universal app requires an iPhone, iPod touch or iPad with iOS 6.0 or later.

In addition to full iOS 8 support, the official iOS app of the once popular private social network, Path, is no longer blown up to fill the iPhone 6’s screen as it runs natively on the bigger handsets.

Path for the iPhone and iPad, a 20.9-megabyte download, requires iOS 7.0 or later.