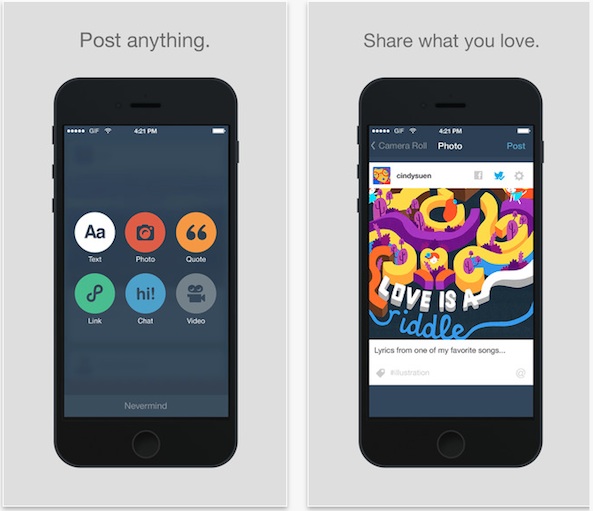 Since Yahoo’s $1.1 billion acquisition of the popular blogging platform Tumblr in May of 2013, the Internet giant has been consistently adding new features and enhancements to Tumblr’s nicely done iPhone and iPad application.

In its latest update Thursday, Tumblr has picked up three useful features. Firstly, you can now use Tumblr’s two-factor authentication to log in securely into the app. Prior versions required you to visit Tumblr’s web interface in order to create an app-specific code for use with the app.

Now the process has been simplified as Tumblr’s two-factor implementation now supports code creation via authenticator apps such as Authly or Google’s own Authenticator for iOS. If you’re not using authenticator apps, Tumblr can instead text you a code to your mobile phone number.

The other two features are explained right after the break

Tumblr is available free in the App Store.

Secondly, the app’s gained a redesigned video player that allows you to watch videos in the dashboard itself instead of playing the clips full-screen. The videos in your feed play automatically, but only over Wi-Fi networks so there’s no need to worry about your cellular bandwidth consumption.

And thirdly, you can now reblog comments and delete them with a single tap.

The 21.9-megabyte universal app requires iOS 8.0 or later. Tumblr comes with a Share extension for quick reblogging and is optimized for the iPhone 6 and iPhone 6 Plus screens. Earlier this month, Yahoo released a standalone Tumblr for OS X app in the Mac App Store.