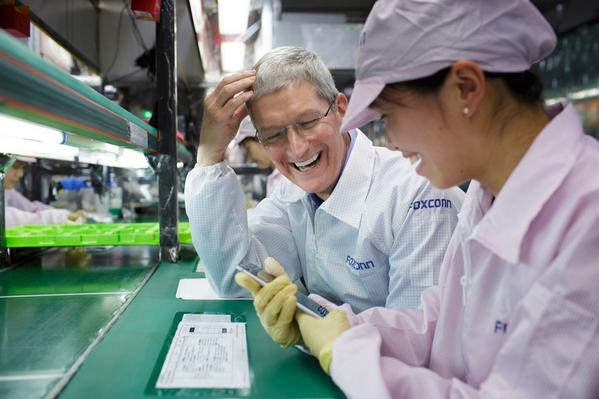 Tim Cook paid a visit to Foxconn’s iPhone manufacturing plant in Zhengzhou today, one of what could be many stops during his China trip. The Apple CEO tweeted out “Great to meet talented like Zhang Fan, who helps make iPhone 6 in Zhengzhou,” along with a photo.

Cook’s face is a familiar one at many Asian supplier factories, thanks to his long tenure as Apple’s operations chief and the company’s recent commitment to comply with Fair Labor Associations guidelines. In fact, he visited the Zhengzhou plant as recently as spring 2012.

Reuters reported on Wednesday that Cook was headed to China to meet with the country’s Vice Premier Ma Kai in in Beijing, to discuss recent targeted attacks on iCloud originating from the country. It has been suggested that the Chinese government sponsored the attacks.

It’s also possible that Cook is in China to personally ensure that Apple’s supply chain is running smoothly. Within the last month, Apple has unveiled several new products, including new iPhones and iPads, and the busy holiday shopping season is just around the corner.