Leading United States carriers — Verizon Wireless, AT&T and Sprint — have responded to the release of Apple’s iPhone 6 and iPhone 6 Plus in literally the same manner, by doubling the amount of LTE data included in shared plans albeit on a temporary basis.

Sprint has responded by changing its 32/40/60GB Family Share Pack buckets to 60/80/120GB ones at no additional charge, also valid through October 31.

And arriving late to the party, Verizon is now getting in on the double-data action by increasing the amount of data available to customers who subscribe to its higher-end family plans. The Big Red carrier’s time-limited promotion lasts between tomorrow and — you guessed right — October 31.

Jump past the fold for additional information and the fine print.

As evidenced by the (fuzzy?) image top of post AT&T shared as part of it announcement, all Mobile Share Value plans with 15GB or higher have been doubled on a temporary basis.

And business customers can now share 60GB to 100GB of data on up to 25 lines. Prices include monthly access charge of $10 to $40 per month per device.

The carrier insists that subscribers who sign up for its service with an eligible plan can keep their increased data buckets permanently, but AT&T has always found a way to break similar promises it made before.

Mobile Share Value plans include domestic unlimited talk and text, as well as unlimited international messaging from the U.S. to select countries.

Check out Sprint’s chart outlining the changes below. Needless to say, all pricing excludes taxes and Sprint surcharges.

Sweetening the deal, Sprint will waive its $10/$15/$20 monthly access charges for handsets, tablets and mobile broadband devices on 20GB or higher data allowances through the end of 2015, valid only if you port your number to them. Note that non-business subscribers must buy their iPhone through Sprint’s Easy Pay or the newly-introduced iPhone for Life offering.

For those wondering, this Apple-exclusive plan delivers unlimited data while allowing you to rent an iPhone for two years before upgrading to the newest model in exchange for a flat fee of $70 per month, no money down and no tax.

Here’s the math: the $20 per month charge is to lease the handset and $50 per month is for an iPhone-exclusive unlimited talk, text and data service, resulting in a monthly charge of at least $70 for the entry-level iPhone 6 model. 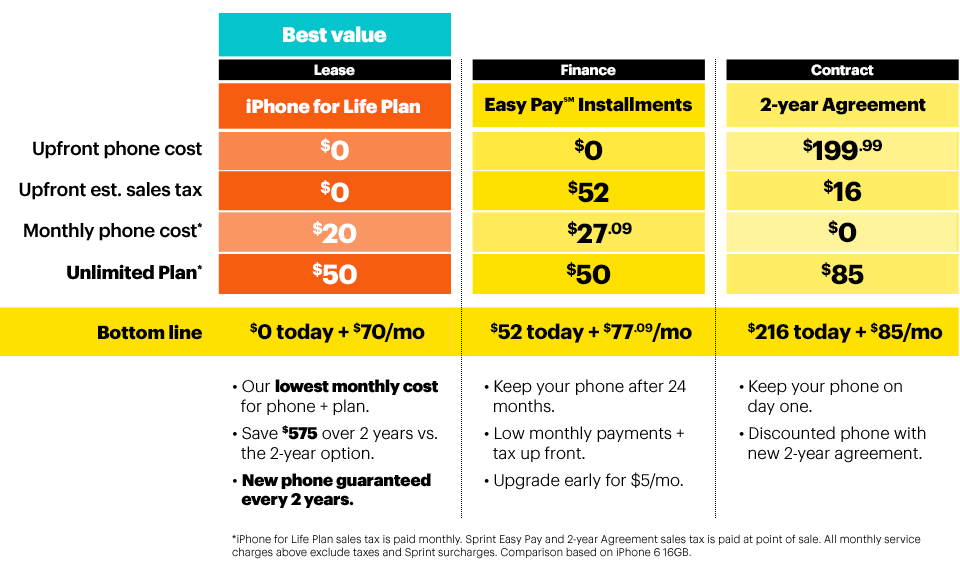 Of course, you’ll need to return your old handset when upgrading to the latest model.

This is basically a leasing program: if you break it you buy it, my friend (at least if you don’t have insurance). iPhone for Life is offered on Sprint’s Family plans as well, with the monthly lease at $80 instead of $20.

Starting tomorrow, Verizon is doubling data on its higher-end shared MORE Everything family plans while increasing (but not doubling) the amount of data included in its lower-priced family plans. For example, the entry-level family plan which costs $110 per month has increased from twelve to fifteen gigabytes of data.

The next family plan which costs $130 per month has gone from sixteen to thirty gigabytes of high-speed LTE data. Verizon’s higher-end $150/$375 shared plans that used to offer 20/50GB have been doubled to 40/100GB for the same price. 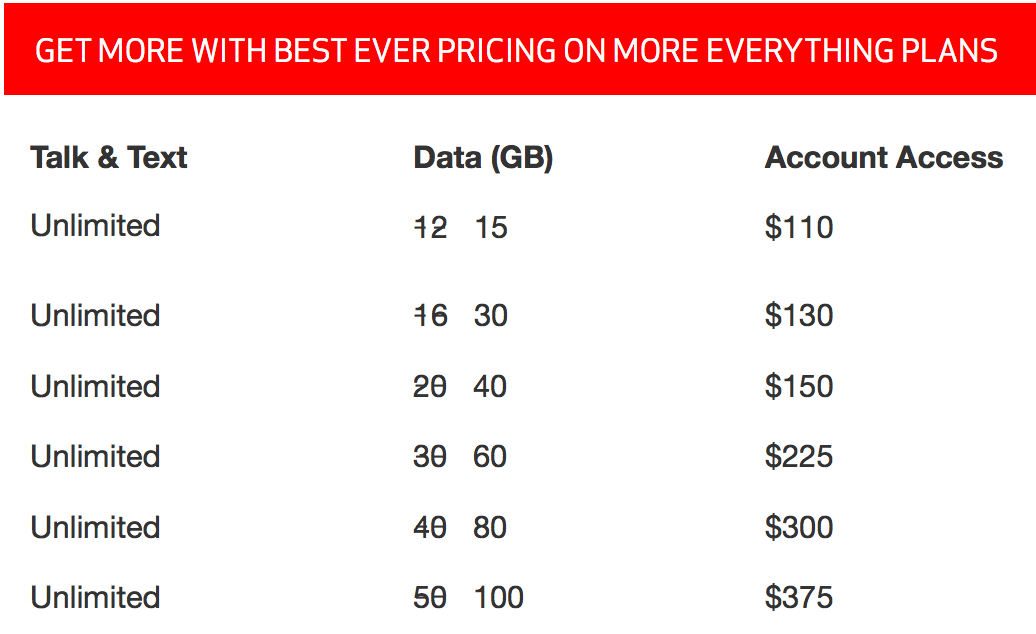 Verizon is making its offer available to both new and existing personal accounts, as well as to business accounts on shared plans. A separate access fee applies to each device on the plan, which can cost up to $40 per device.

But what about T-Mobile?

As you may have guessed, the Deutsche Telekom-owned Uncarrier was first out of the gate with the double-data meme. As of September 3, T-Mobile has been offering double tablet data for an extra $10 per month, if you add a new tablet to your smartphone plan.

Moreover, the firm has increased the number of supported family plan lines from five to ten per account, with each device having its own data bucket.

But the carrier didn’t stop there: the company is now supporting Wi-Fi Calling on “all new smartphones”, including the recently released iPhone 6 and iPhone 6 Plus which support this feature out of the box.

Note: T-Mobile’s chart does not include double-data deals by the other guys.

Speaking of new iPhones, T-Mobile will be adding the iPhone 6 and iPhone 6 Plus to its Test Drive program, allowing would-be subscribers to borrow a new iPhone free for a week in order to to test out the carrier’s network.

Here are the highlights from T-Mobile’s Uncarrior 7.0 event.

What do you think about the aforementioned double-data offerings?

In my personal opinion, John Legere, T-Mobile’s outspoken President and chief executive officer, summed it up best in a blog post.

“I’ve always maintained that shared data plans are a source of customer pain. And, it’s becoming clear now that they are,” he said. “The old carriers’ shared data plans are just another ploy to push customers over their data limits and suck money out of their pockets with overage charges they can’t see coming.”

Do these promotions offer a reasonable value for your money? Or are they just smart baits designed to lock you into another long-term plan that may be inappropriate for your needs?

Don’t be shy, sound off in the comments below.