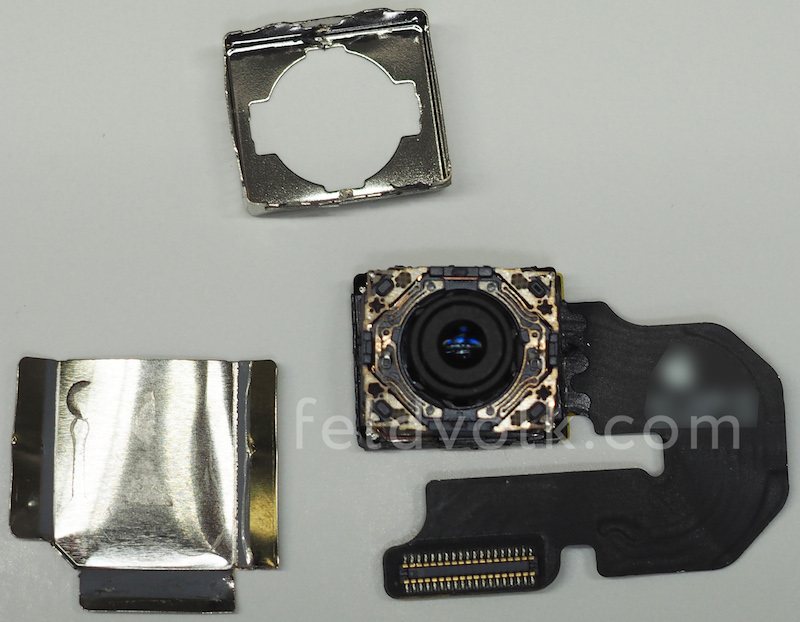 Modified Russian accessory vendor Feld & Volk, known for customizing iPhones with luxury parts like solid gold volume buttons, Friday on its Instagram profile published photos it claims show a rear camera with optical image stabilization for a 5.5-inch iPhone 6 version, along with an assortment of other claimed components such as the microphone, speaker and the power button with rubber seal.

Jump past the fold, give the images a quick look and join us in comments for an analysis.

The claimed 5.5-inch iPhone 6 rear camera can be seen top of post and below. As evidenced by a pair of comparison shots below, the iPhone 6’s iSight module is comparably larger and thinner than its iPhones 5s counterpart.

Virtually each and every one of the camera components that have leaked out thus far points to a protruding lens, something Apple’s only done on the iPod touch but never on the iconic smartphone.

Comparison shots of the iPhone 6 camera module (left) vs the iSight rear camera found on the iPhone 5s (right).

Implemented in the lens itself, OIS stabilizes the image by varying the optical path to the sensor, or by moving the sensor as the final element in the optical path. It’s a very sensitive mechanism: we’re talking microscopic mechanical movements here.

It’s unclear whether OIS is exclusive to the 5.5-incher or if both 4.7 and 5.5-inch iPhone 6 models sport this premium photography feature. For what it’s worth, Feld & Volk remarks the claimed component doesn’t fit inside the 4.7-inch rear shell it recently showed off on video. For reference, Samsung’s newly introduced Galaxy Note 4 phablet includes a 16-megapixel back camera with OIS and 4K recording.

Seen above: the protective mesh for the speaker and microphone holes. Notice how it’s color-matched to the various iPhone 6 color ways.

Right below: the iPhone 6 power button with rubber seal.

No iPhone has ever had a rubber seal around the power button, by the way.

I’m not an expert in these things, but wouldn’t the rubber seal hint at a waterproofed iPhone 6? At the very least, that design addition should help increase the handset’s resistance to dust and moisture.

Trusted analyst Ming-Chi Kuo of KGI Securities wrote in a note to clients yesterday that he expected the iPhone 6’s power button to be programmable for integration “with specific applications”.

Though pure speculation on my part, Apple could theoretically provide a section in the Settings app to assign different functions (maybe even app-specific commands) to short and long presses.

For example, long-pressing the power button could invoke a rumored one-handed software mode, or take me straight to the Camera app.