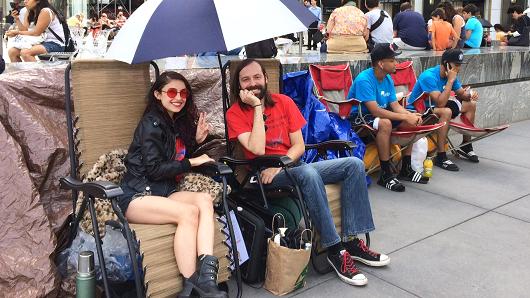 The iPhone 6, or whatever Apple is going to call it, has yet to be announced, but there are already people lining up for the device. CNBC notes that at least 5 customers have already set up camp outside of Apple’s flagship 5th Avenue Apple Store in New York City.

It’s not uncommon to see folks lining up outside of Apple retailers ahead of a major product launch—last year folks began forming lines around September 6th. But this year, campers have taken it to a new level, with some showing up before the month even began.

CNBC interviewed some of the people in the 5th Avenue line, and it seems that few of them are there solely for the iPhone 6. Brian Cebello and Joseph Cruz are representing reseller BuyBackWorld, and are hoping to beat the 18-day iPhone launch campout record.

The pair were actually the first in line, until Jason and Moon Ray, who are promoting a health app, paid them $2,500 for the top spot. Meanwhile, Robert Samuel, founder of professional line-waiting service S.O.L.D., says he already has orders for seven iPhone 6s.

For those of you who can’t spend 2+ weeks camping outside of an Apple Store to get the new iPhone, tune into iDB next Tuesday for Apple’s big media event. The company should announce availability for the handset, which we’re expecting to be around mid-September.