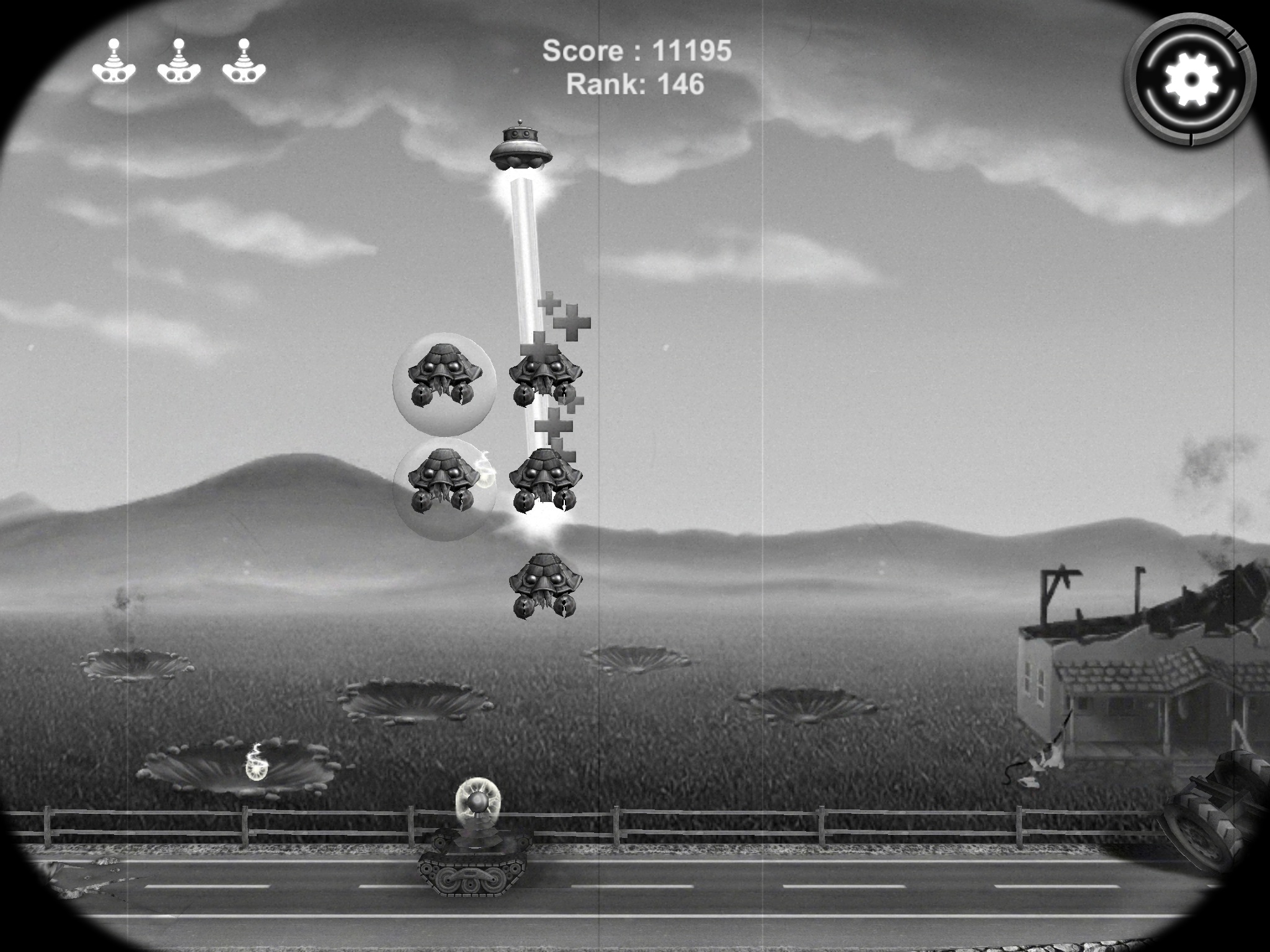 I love the idea of taking a popular video game from decades ago and giving it a twenty-first century makeover. Turn flat, pixelated programs into fully realized creations and see what it looks like under today’s graphics.

Invaders! From Outer Space is an arcade shooter that uses the benefit of today’s technology on one of our most beloved sci-fi games. Stop the alien invasion before they steal all of our cows.

You don’t have to look very hard to see where the influence for the game’s graphics comes from. Those iconic alien beings that are floating down in formation are 3-D renderings of the Space Invaders of our youth. Each extraterrestrial creature has been meticulously redesigned with loving attention to what those pixelated beings might look like if they were real.

Your supped up tank has a retro sci-fi globe on top of it that shoots bursts of laser beams up at the descending creatures. On later levels, the familiar floating brick layer that serves to both protect and hinder your ability to save earth appear with detailed textures.

The black-and-white retro television set overlay gives the entire game a 1950s science fiction feel. Even the lighthearted dialogue between scientist Dr. Dent and military General Jonah remind you of a campy classic that might appear on “Mystery Science Theater 3000.” My favorite moment is when the aliens start quoting lines from “The Hitchhiker’s Guide to the Galaxy.” 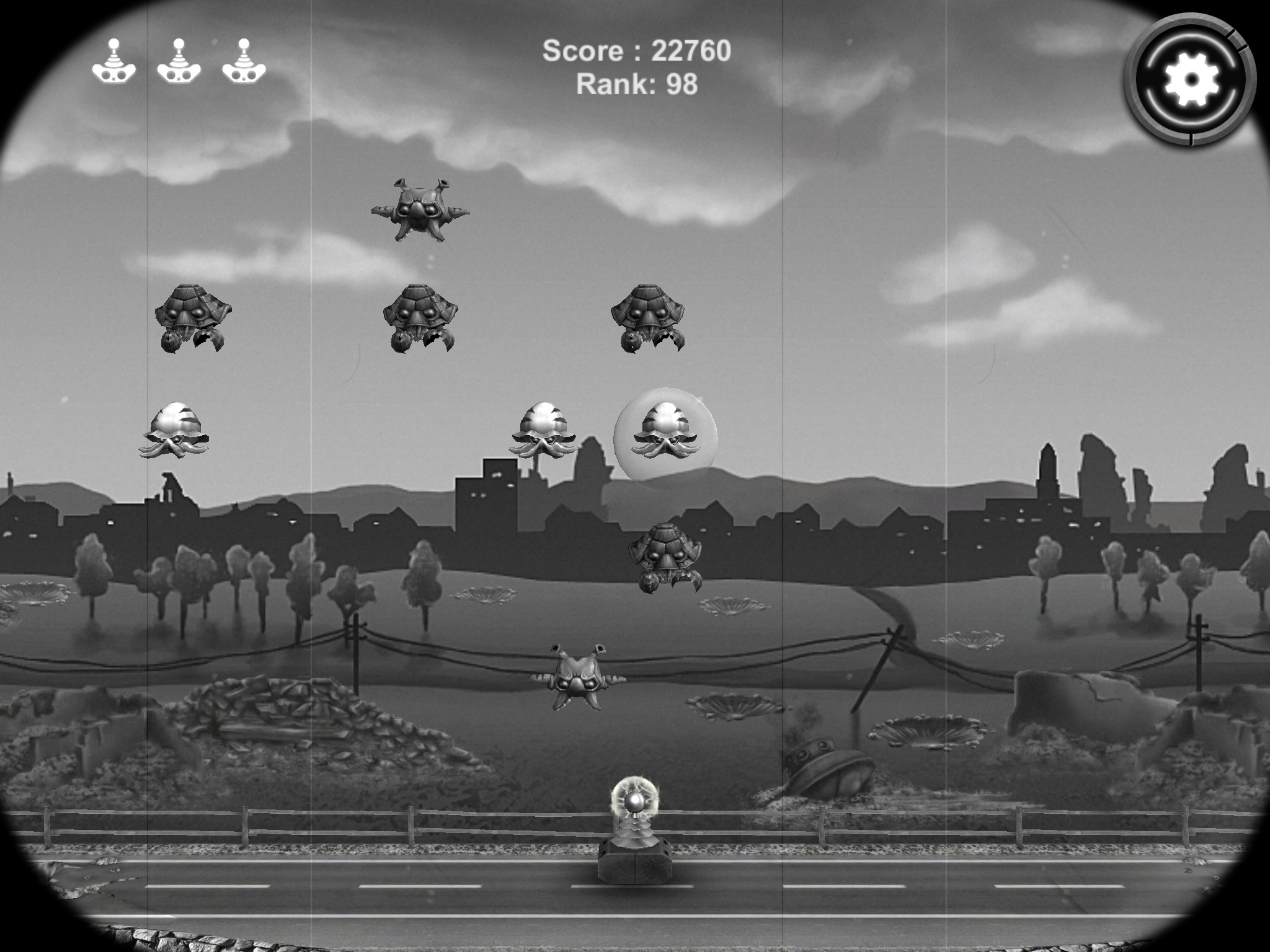 As noted above, the game looks awesome and pays homage to our childhood favorites with loving attention. However, the gameplay suffers for it. It is as if the game’s development team spent too much time on the looks and not enough time on the mechanics.

The main complaint is in the control scheme. Instead of a virtual joystick and fire button, players move from one side of the screen to the other and fire the weapon using invisible touch controls.

I say “section” because there are no visible controls. In the setting section, you are supposed to be able to turn on the button layout, but it appears there is a glitch. You will be flying blind, so to speak.

You can switch to tilt controls, but I found that to be even more awkward than trying to touch low and tap high on both sides of the screen.

That being said, it doesn’t take too long to get used to the awkward controls.

The game starts out fairly slowly if you are comparing it to Space Invaders, which I did because it is obviously a similar game. The slow action is good at first, since you have to work to figure out how to control your tank. However, as the levels progress, things speed up and aliens fire back.

Plus, saucers randomly fly across the screen and either increase an alien’s health, drop a cow bomb, or release an electrical bubble that slows your tank down.

Eventually, you’ll face the big boss and have to lay as much firepower down as possible on the multi-eyed monster while trying to avoid being pummeled to death by his rays.

At the end, you can enter your name, but your score doesn’t seem to go anywhere, not even locally. After you enter your name, the game jumps back to the main menu and you start over. There is no Game Center connection or even an in-game score card to beat. 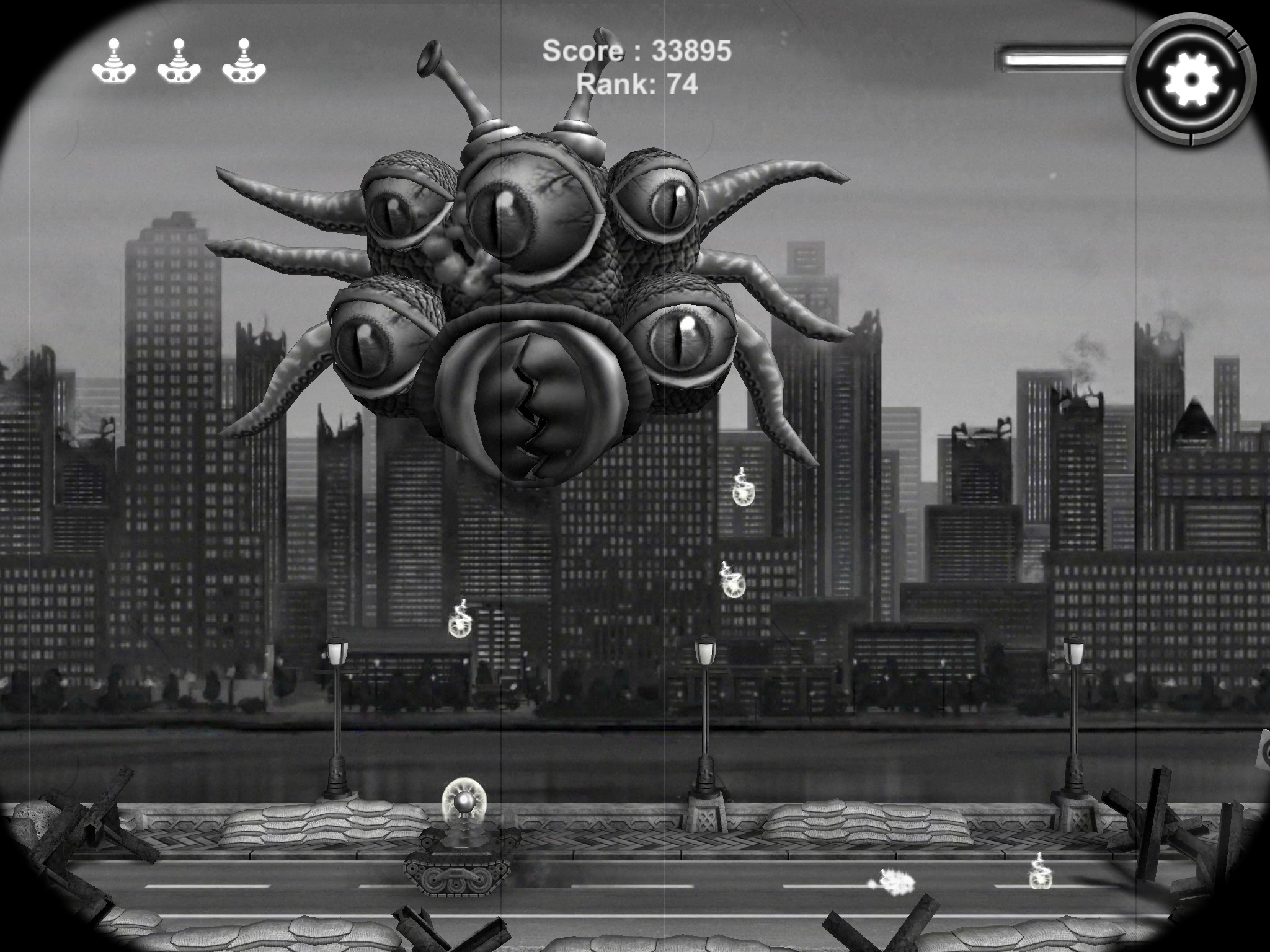 I loved the graphics. I am a super sci-fi nut and love Space Invaders. I got a kick out of the storyline that takes place between levels. Read all of the content and you will discover various nods to iconic science fiction in pop culture.

The worst part about this game is that it is so short. Just as the action gets good and the game starts to feel challenging, it’s over. There isn’t even a reason to try to get a high score because your achievements are not saved.

There are a few glitches that need to be worked out, as well. Players need to be able to see the button layout if they want to. The health display option doesn’t seem to work either.

This game desperately needs Game Center connection so you can at least try to get top ranks against other players.

Invaders! From Outer Space costs $0.99. That is a reasonable price for anything more than free. The game is worth the price for its visual appeal. However, the replay value is practically non-existent since you can’t save your score. There is no reason to try to beat your high score when you don’t even know what it is.

I really wish this game was better than it is. I love the way it looks. I just don’t love the way it plays. You can get accustom to the strange controls and the game is fun enough to entertain you for a couple of hours. The fact that you can’t save your score really messes with its replay value. This game is available on the iPhone, iPad, and iPod touch. You can download it in the App Store today.

Obviously, this game is similar to Space Invaders, but don’t expect an exact recreation of the original.