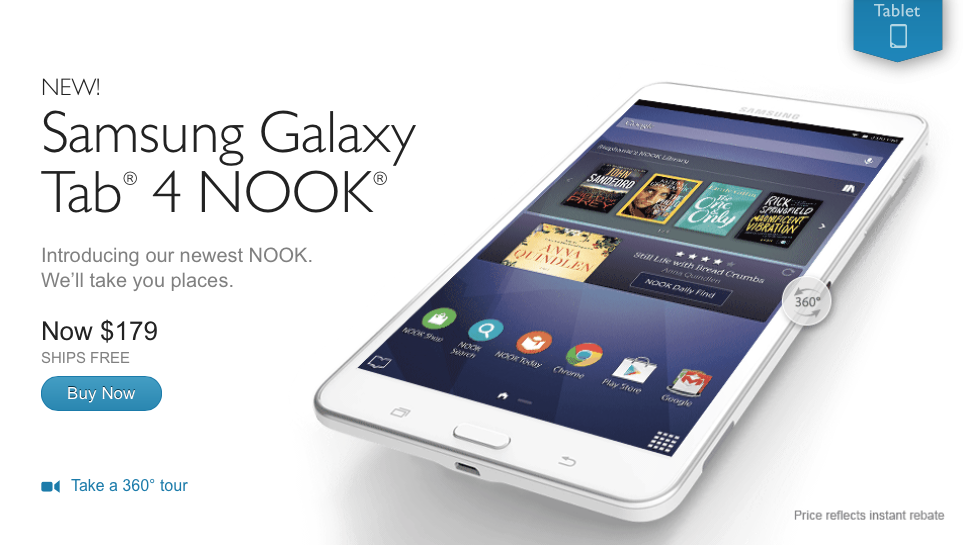 About a year ago,  Barnes & Noble announced that it was going to put an end to most of its Nook tablet offerings. Acknowledging that the battle with Apple, Google and Amazon was too tough to fight alone, it said it would be interested in taking on a partner to share the work.

This new co-branded tablet offers the best of both worlds: the first-ever full-featured Android tablet optimized for reading. With tablet tools for everyday use and an endless collection of reading and entertainment options, the Samsung Galaxy Tab 4 NOOK lets readers connect to the world when they need to, and escape from it whenever they want. Barnes & Noble research shows that while the rise of mobile technology, including tablets, has undeniably changed how, what and the ways in which Americans read, they’re doing more of it than ever.

In terms of hardware, the tablet features a 1280×800 OLED display, 1.2GHz quad-core processor, 1.5GB of RAM, 8GB of storage and a microSD card slot. The software NOOK-branded, running atop Android KitKat, with some nifty tricks from Samsung like its Multi Window feature.

But my guess is the lure of this device will be more about the content than the hardware, and Barnes & Noble has plenty of it. The NOOK Store offers over 3 million books, the largest selection of top digital magazines, and a robust selection of your favorite apps, TV shows and movies.

Here’s a video of the tablet in action:

I feel like this is a great move by Barnes & Noble, who really has nothing to lose here, and a rather interesting one by Samsung. While it doesn’t look like this tablet sheds quite as much of the Google/Android branding as Amazon’s Kindle Fire products, it certainly isn’t front and center.

Anyway, if you’re interested, the Samsung Galaxy Tab 4 NOOK is available today in more than 660 Barnes & Noble bookstores and online at bn.com and nook.com for $179 after a $20 instant rebate. It comes in both white and black 8GB models, and includes over $200 in free content.