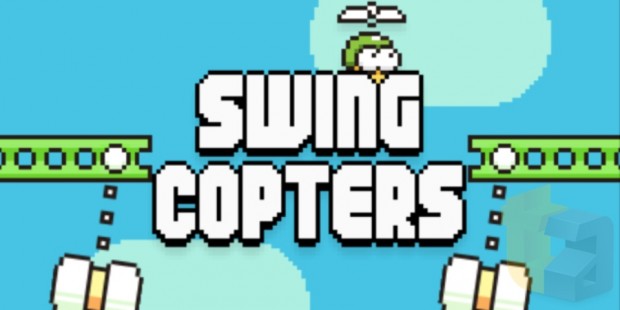 Dong Nguyen, creator of the smash hit mobile game Flappy Bird, is back with a new title, set to be released later this week called Swing Copters. As you can see, the game features similar graphics to FB, and from what we hear, it has similar gameplay.

According to TouchArcade, who has been given an early look at Swing Copters, the game gives players the same “just one more try” feeling as Flappy Bird did, and is even more challenging. We’ve posted a video showing the game in action below…

And here’s more on the gameplay from TouchArcade’s Eli Hodapp:

Swing Copters captures all the “just one more try” of Flappy Bird, and seems even more brutally difficult. In the game, you play as a little dude who has a propeller on his head. Swing Copters coaxes you to tap the screen, at which point you’re airborne, wildly flying to one side. Tapping changes your flight direction, and the goal is similar: Fly through as many gates and get as high as you can. Sort of similar to Flappy Bird, but going up instead of to the side.

Swing Copters will be available this Thursday, the 21st, as a free download, with a single in-app purchase of $0.99 to remove the ads. There’s still no word on the new version of Flappy Bird though, which we recently saw pop up on Amazon’s Fire TV platform.