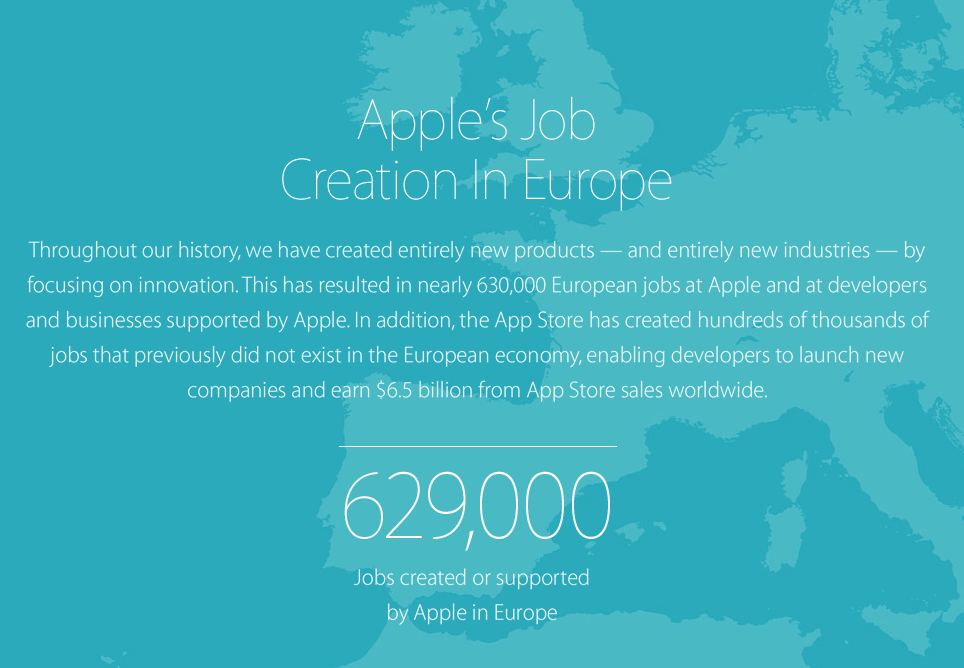 Apple today released a plethora of freshly-updated stats and pretty charts that paint a rosy picture of the company’s positive contributions to the European job market and the continents’s economy as a whole.

The so-called app economy is now sustaining half a million jobs across Europe, with a total of 629,000 jobs created or supported by Apple in Europe. Apple paid out $6.5 billion to European app developers so far, representing nearly out-third of the $20 billion the company paid to developers globally.

Throughout our history, we have created entirely new products — and entirely new industries — by focusing on innovation. This has resulted in nearly 630,000 European jobs at Apple and at developers and business supported by Apple.

In addition, the App Store has created hundreds of thousands hobs that previously did not exist in the European economy, enabling developers to launch new companies and earn $6.5 billion from App Store sales worldwide.

The company says the app economy will add $86 billion to the global gross domestic product in 2014, and $16.5 billion in revenues to EU GDP (growing at a rate of 12 percent per year). 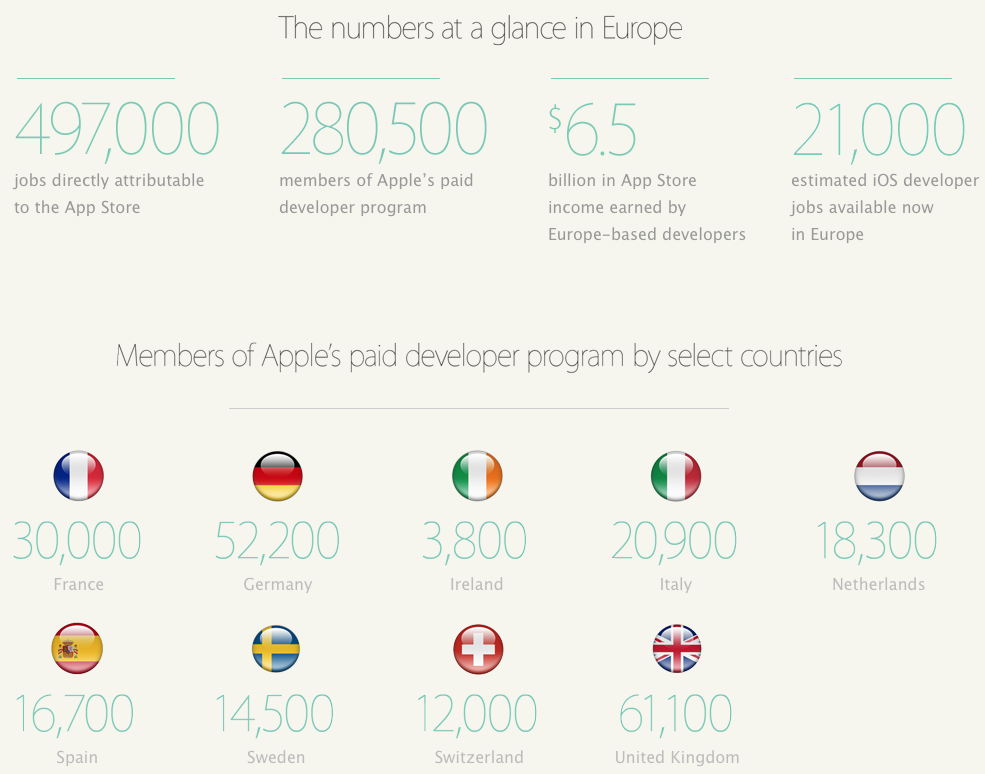 As many as 497,000 jobs in Europe can be directly attributable to the App Store, based on Vision Mobile’s July 2014 research entitled “The European App Economy.”

“With more than 1.2 million apps and over 75 billion downloads, the App Store has created an entirely new industry: iOS app design and development,” reads a note on Apple UK’s website.

There are over 580 Apple Premium Resellers across Europe, each employing an average of four employees per store, meaning that an additional 2,320 people are employed in Apple-related third-party retail stores.

As for Apple’s own retail outlets, the firm employes 10,000 retail employees that work 101 brick-and-mortar locations in eight European countries. On average, Apple employes about a hundred employees per each European store.

Also, this on the Berlin retail store restoration:

For our store on the Ku’damm in Berlin, we sourced the original Kirchheimer Muschelkalk stone from a quarry near Kirchheim. The stone was installed by Gebauer, a multigenerational family business based in Berlin. The interior’s signature charred plaster works were done by Ettenheim’s Marko GmbH.

The webpage makes note of the fact that “local artisans, vendors and contractors who understand the materials and architectural period details” are commissioned to build Apple Stores. 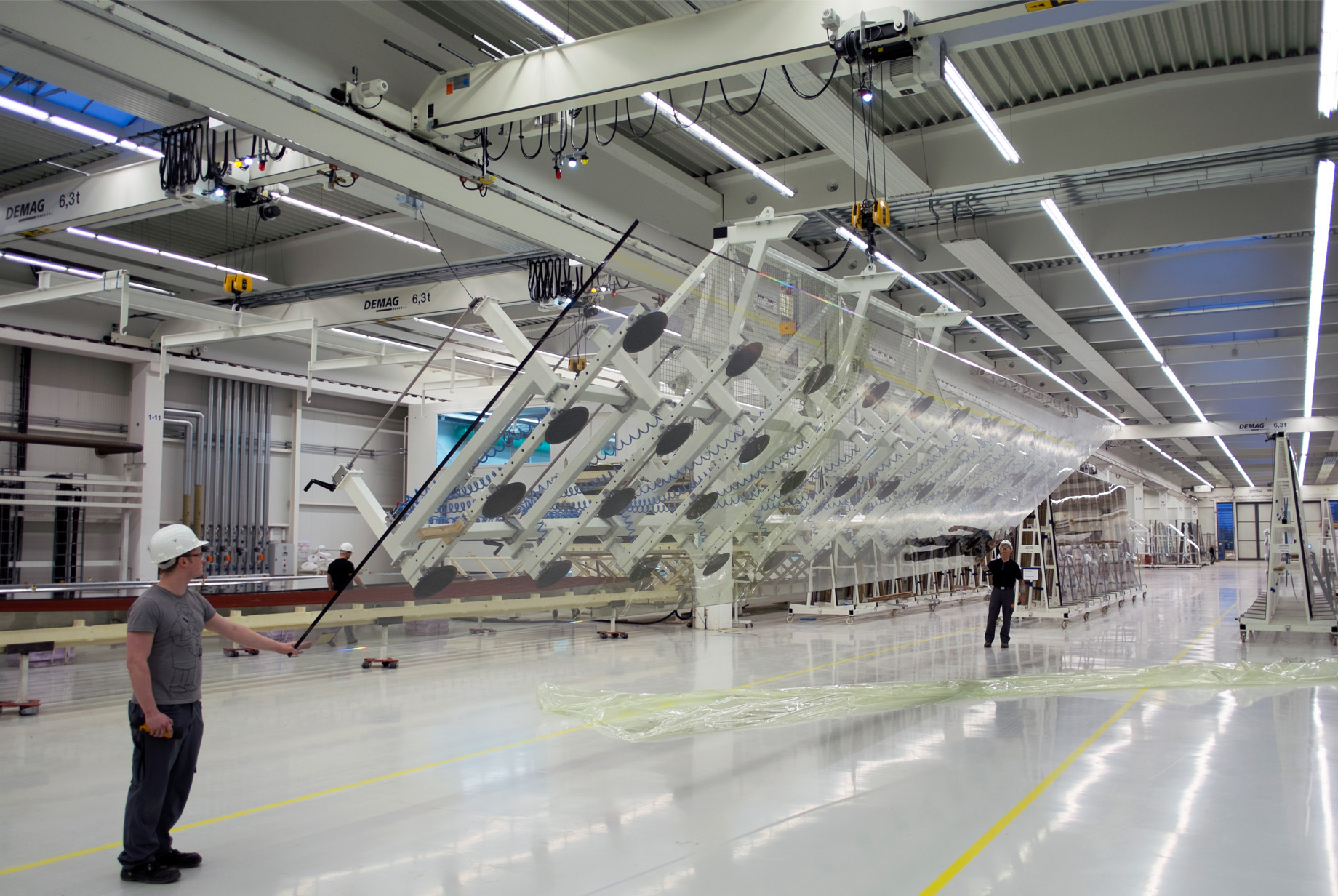 Finally, there are 4,500 suppliers based in Europe who provide various components for products, including a German glass manufacturer called Seele, pictured above.

With over 1,000 employees, the company is widely recognized for having some of the best engineering talent and most advanced aluminum, steel, and glass fabrication in the world.

Since Apple began working with Seele in 2001 the partnership has pushed glass fabrication and design to an entirely new level, including advancements that have made it possible to create glass panels in sizes never before produced.

As an interesting side-note, many of the Micro-Electro-Mechanical Systems (MEMS) for iOS device sensors are designed and manufactured in Europe.

“Measured in microns, MEMS components help power the sensors and audio capabilities that are critical to making our products simple and intuitive to use,” the company writes, adding that these components require thousands of jobs across six countries.

One data point you don’t get to read: how many traditional jobs the app economy has destroyed in Europe.