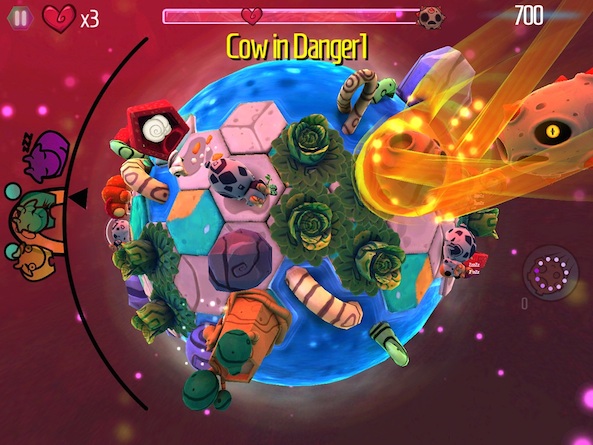 Cows are simply adorable. Many people will overlook the big-eyed dopey beasts as being little more than tomorrow night’s dinner. But, take a closer look at one and you’ll see that they are beautiful in their bizarreness. You just want to take one home as a pet. At least, I do.

Celleste is an arcade tapping game that has you playing god in a battle to protect these sweet and innocent cows. While they are searching for a safe place to graze, bugs are looking to graze on them. Protect the spotted beasts against evil critters with a taste for beef… 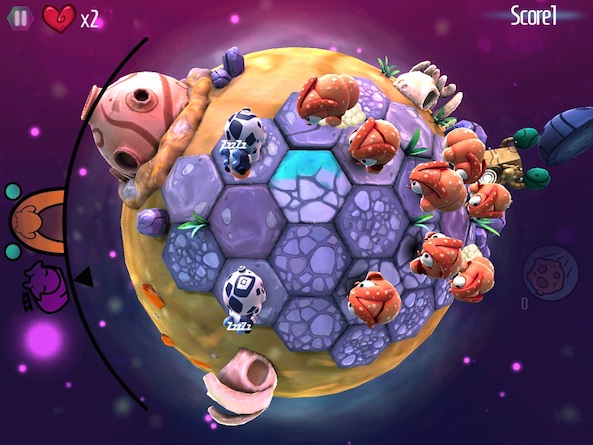 Players are in charge of a tiny world that is reminiscent of the one the Little Prince comes from. Swipe from left to right across the screen to find the cows and wake them up. They will head toward the shiny portal, munching cabbage heads in the ground along the way.

Once the obstacles are digested, the cows have a clear path to safety. That is, until the alien cow-eaters show up. These strange bug-like creatures appear from caves and head straight for the nearest flank. Your job is to smash them out of existence by tapping them. You must pay close attention to all areas or some cows may be left unattended and vulnerable to a snack attack.

To move quickly from one area of the world to another, players swipe across the left side of the screen where the cow meter is. Cows that are in danger will change in color from green to yellow, to orange, and finally to red. Tap on a cow to quickly transport and defend it.

Of course, you only have one finger. Well actually, you have eight fingers and two thumbs, but my point is that it isn’t easy to tap all of the bad guys into dust and bones with your limited digits. To help facilitate a crushing blow to a number of bugs at once, throw a meteor at them. 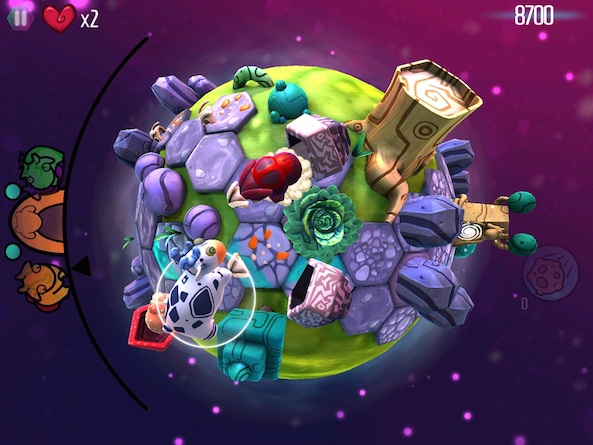 Players have two meteors on each level that they can use to drop a nature bomb on enemies. It doesn’t matter where you toss it, the cows won’t be damaged, but the aliens will. However, since you only have two per level, make sure you are launching the attack at the appropriate time.

As the game progresses, levels get significantly harder, so timing and reflexes are important to the cows’ survival. Do you have what it takes?

Celleste is available on the iPhone, iPad, and iPod touch for $2.99. You can download it in the App Store today.

What do you think of Celleste? Do you feel like saving cows, or are you hoping to grill up some stakes for dinner, too?