Boy, that new anti-iPhone Samsung ad titled “Wall Huggers” really struck a nerve, didn’t it? Blame it on Apple: the iPhone is frequently criticized for its battery life which isn’t abysmal at all though you’d be hard-pressed to argue that its ~1,560 mAh battery is a match for high-end Android devices that go beyond 3,000 mAh, such as LG’s G3 or Samsung’s Galaxy Note 3.

Feeling your pain, lo and behold, Nomad has created a nice solution to your battery woes. Their new NomadPlus accessory transforms your iPhone’s charger into a portable 1,500 mAh battery for backup power…

The NomadPlus is basically an external battery pack that piggy-backs off your Apple charging block. Costing just $39, it sports a built-in 1,500 mAh battery and of course plugs into any Apple wall charger – the type that ships with recent iOS devices.

It can charge any smartphone or other USB-powered devices via a built-in 5V/1A USB port and its battery holds enough power to charge your iPhone 70 percent after you unplug it from the wall.

Yes, there’s a locking mechanism to keep the Apple plug in.

And, when you plug the whole thing into a wall socket, the NomadPlus first charges any device that’s connected to it, and then its built-in battery.

You can pre-order yours over at the Nomad website.

There’s no word whether Nomad is planning on making an European socket version. Some people may object that the NomadPlus is an overpriced accessory and really just a dumb cube to connect a cord to the wall. 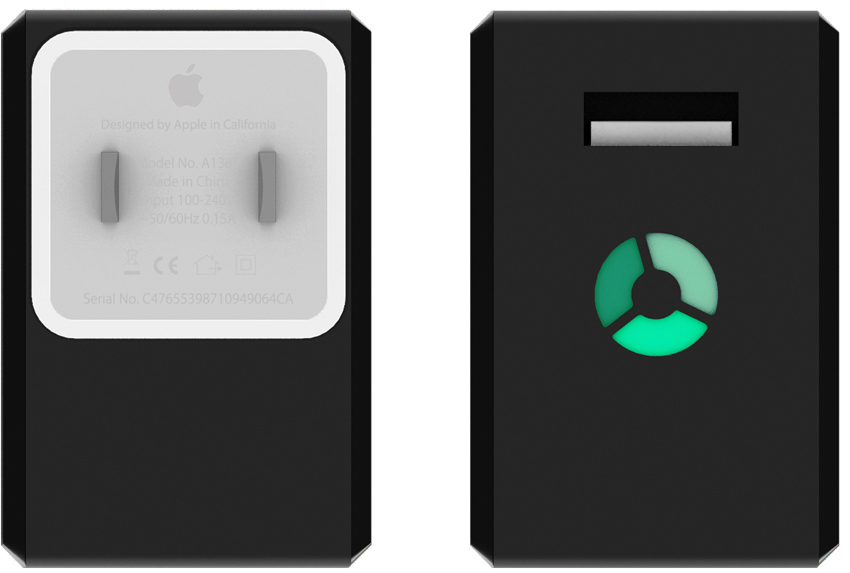 Of course, Mophie makes great chargers, too, and there are lipstick-sized chargers that sell for half as much while providing a 3,000 mAh battery.

And let’s not forget Anker’s line of external batteries that hold a ton of juice – as in, a whopping 12,000 mAh for that same price tag – or Fluxmob’s 3,000 mAh external battery with a tiny footprint and a folding plug.

But that’s beyond the point.

To be perfectly fair, the NomadPlus doesn’t need a massive battery.

The accessory purposefully trades power for footprint, creating a compact everyday solution. It wants to be your daily driver: just charge it up every night when you charge your iPhone and you’ll always have a battery boost.