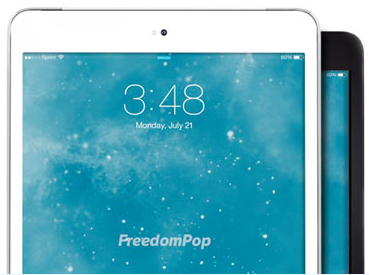 FreedomPop, a startup backed by Skype founder Niklas Zennstrom which provides free or inexpensive Internet service on the Sprint network, today added the original iPad mini and other cellular-capable iPads to its stable of supported devices.

It’s basically the same plan that the company originally offered to smartphone owners. Additional voice and data is available for a fee.

Regardless of whether you’re buying a little used iPad mini from FreedomPop or bringing your device over from another carrier, FreedomPop will treat you to gratis 500MB of LTE data, 200 voice minutes and 500 text messages.

But how does one take advantage of voice minutes and text messages on LTE iPads which only support data connections over cellular? Read on for the full reveal…

According to FreedomPop’s webpage here, they’re treating iPad users to the Apple headphones with built-in mic and a dedicated app which relays VoIP calls and text messages through its servers over the cellular network.

This makes it possible to make and receive phone calls and receive/send text messages on LTE iPads, giving your tablet some much-needed phone capability. In a nutshell, the company provisions a unique phone number with voice mail, number porting and more.

iPads other than the original iPad mini are supported as well.

FreedomPop is now selling Samsung’s aging Galaxy Tab 3 direct to customers for $199 a pop. An LTE iPad mini will set you back $319, but note that these are refurbished models. The Online Apple Store also sells refurbished iPad mini models for $319.

Again, FreedomPop uses Sprint’s network for LTE data so your device must be compatible with the Sprint network.

The free 500MB of LTE data, 500 messages and 200 voice minutes is essentially the same package offered to FreedomPop’s smartphone customers.

These two paid tiers include the same 500MB of LTE data as the free service. If you need unlimited everything, including data, prepare to fork out $19.99 per month.

What do you think of FreedomPop’s offer?