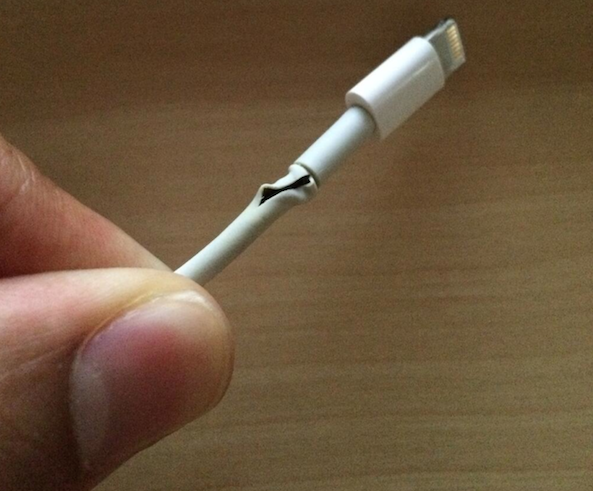 Why is this 6 month old cable already falling apart? That’s the question my wife asked one day, referring to the Lightning cable she has plugged by her side of the bed to charge her iPhone at night.

As much as I tried to find a good reason, there was nothing I could say that would actually explain why this fairly new cable was already fraying. The only explanation I could give her was that these cables are crap.

It’s not like we’re rough on these cables either. We actually take good care of them. My wife’s charger, for example, has never been anywhere but her bedside, just being used at night. This is not the kind of usage you’d think would be so detrimental to a cable supposed to last several years.

Since I believed this cable was still covered by my iPhone warranty, I decided to take it to Apple and see if they would replace it.

How to get a damaged Lightning cable replaced? Just ask

Without making a Genius Bar appointment, I walked into my local Apple Store and walked towards the first employee I saw. He happened to be the manager of the store.

I showed him my Lightning cable and kindly asked if this was covered under my iPhone warranty. He briefly looked at it and told me to wait a second as he walked away. He came back a few seconds later with a brand new Lightning cable, fresh off the store’s shelves.

No question asked. No warranty check. As a matter of fact, he didn’t even bother asking for my name or anything. I walked out of the store with a new cable but also feeling very satisfied as a customer.

Obviously, your mileage may vary, but it appears that Apple has been offering similar replacement units to people asking for them – our own Jeff Benjamin was also able to get his cable replaced too, simply by asking.

If you get turned down by an employee, come back later and talk to a different one. I’ve learned that service at the Apple Store vary greatly depending on who you talk to.