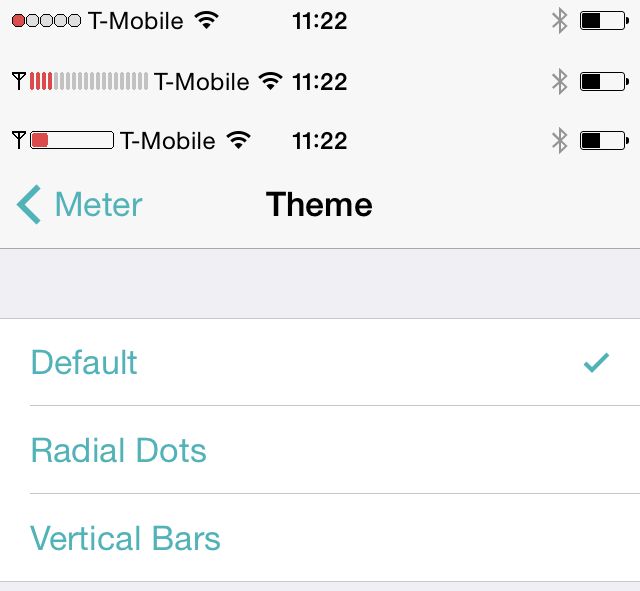 Meter is an upcoming tweak that replaces the stock signal meters for the iPhone’s cellular signal with custom themed meters. The signal themes, which are selectable via Meter’s preferences, allow users to enjoy a different look in the iPhone’s status bar.

Meter is developed by the same developer who brought us Circlet, a similar status-bar-item-altering tweak. While Meter isn’t as ambitious as Circlet, it’s a great compliment to the status bar, and looks awesome when paired together.

We got our hands on a preview copy of Meter to record a video demonstration to show how it works. Take a look inside for more details.

Meter relies on an Activator gesture to switch between themes. Developer, Julian Weiss, advises that users opt for the single-tap on the left-hand side of the status bar gesture. This suggestion was made due to the fact that the cellular signal indicator is also in the upper left-hand corner of the status bar.

I can’t say I’m in total agreement with this suggestion, as I’ve found that this gesture causes iOS’ built-in scroll-to-top functionality and back functionality to make it difficult to invoke the action. I recommend switching between the available themes manually, as described below, or assigning an alternate Activator gesture. 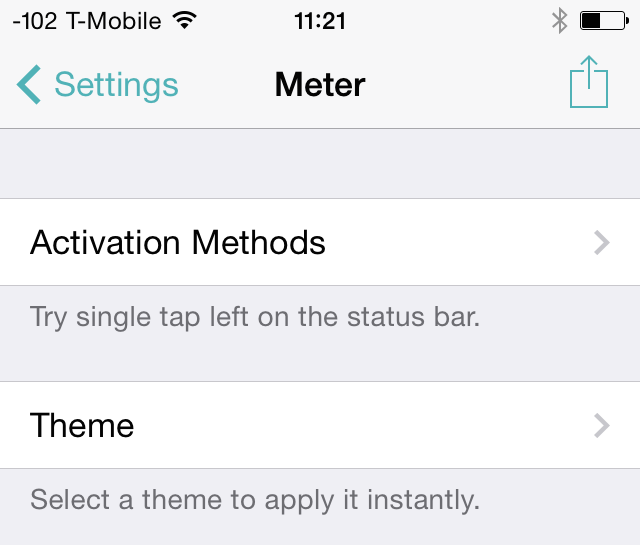 If you’re not keen on using Activator gestures to cycle through the three available themes, then you have the option of going into Meter’s preferences and instantly applying a theme via the Themes panel. Enterprising users will also receive instructions on how to manually add their own themes, though admittedly, relatively few will probably dedicate the time necessary to pull this off.

One of the advantages of utilizing the Activator gesture is that you can switch between the three built in themes along with switching between the stock signal dots and a numerical readout representing signal strength. The Theme picker in the preferences don’t give you these two additional options, so you might find it more effective to cycle through each setting using the Activator gesture.

We discuss Meter fairly in-depth on the latest episode of Let’s Talk Jailbreak. Be sure to listen in as we discuss Meter and other upcoming jailbreak tweaks like Brevity.

If you’re already a user of Circlet, then I definitely recommend that you check out Meter when it becomes publicly available. Like Circlet, Meter requires no theming platforms like WinterBoard. It’s a self contained standalone tweak that just works.

What do you think about Meter? Do you think it look good in your status bar?