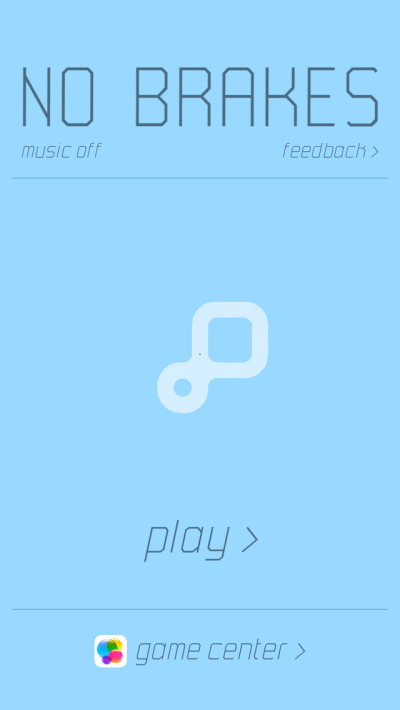 I’ll admit it, I’m a sucker for a game that sports a cute hero. Whether it’s a small animal or an abstract shape with a cute face, I can’t seem to resist helping the little guy to victory. So when I stumbled by the app icon of the game No Brakes (and heard Sebastien mention the game on the last episode of Let’s Talk iOS), I knew I just had to give the game a chance. Read on for my full review…

There’s not much to No Brakes, but for some reason, this is one of its strengths. With sky blue the dominating color, the design is simple and light, which makes for a more enjoyable experience. The main screen isn’t flashy either. It’s a white race track with the blue background. There’s some thin text, too, that serves basic functions like starting the game and asking for feedback.

When actually playing the game, all the user is presented with is the aforementioned track, a rectangle, and text that serves as a speedometer. The block, which is meant to be some sort of vehicle, is designed with a small face inside. This face is not necessarily needed, but adds a happy aspect to the game, as it’s smiling most of the time. There are also small square particle effects coming from the back of the vehicle, simulating exhaust.

There are two basic goals to No Brakes: go fast and don’t crash. If this sounds simple, it’s because it is. Arrows on the left and right control the rectangular hero through the course, but how you control the block is entirely up to you. There is no direction to go, as the game has no real rules.

Guiding the face around the track is surprisingly challenging, however. At first, it can be corralled with simple taps of the arrows. As time increases, so does speed, and the rectangle begins to drift. With more sliding comes a loss of control, and before it feels like the game has even started, the “play again” screen is shown. 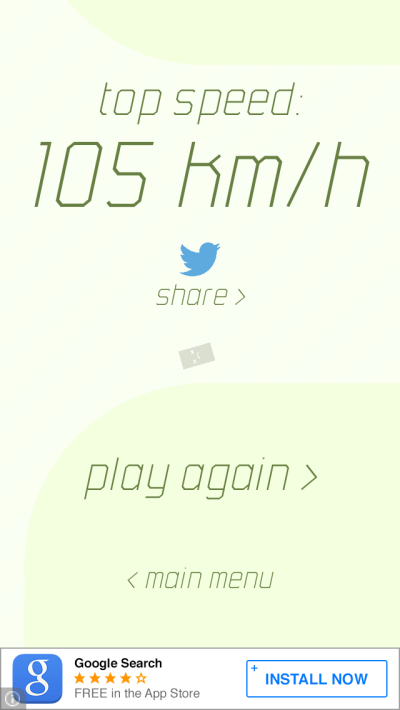 The beauty of No Brakes is that it allows for breaks. This isn’t a game that is best when consumed all at once; if anything, it’ll take about a minute for a good game. This allows for it to be picked up quickly when a user may be trying to kill some time. Additionally, it isn’t graphically intensive, visually stressful, or attention-grabbing – it’s the definition of a casual game.

This game is, in a way, therapeutic. With the relaxed controls and snappy gameplay, I never was under any stress or frustration playing No Brakes. The surroundings in the game are light and appealing and the rectangle is just so adorable to look at, especially when it feels you’ve been successful. The game also has fantastic background music, resembling the best elevator music ever created.

Another underrated feature of this game has to be the in-game advertising – or almost lack thereof. The only time the player will see an ad is before and after the game, and the ad is unobtrusive and in a bar at the bottom. Before I went back into the game, I wasn’t even sure there were ads. 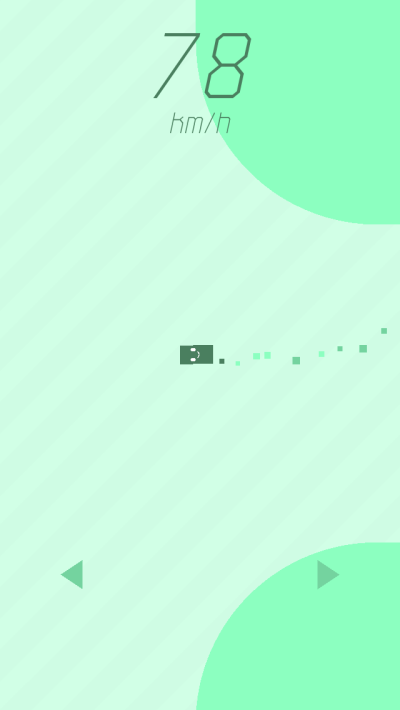 Unfortunately, at the time of writing, there’s only one track for the little car to zoom around, making the game repetitive after some play time. Although it is possible to switch directions on the track, if one plays the game enough, there’s not much else to do other than continue racing on the same track.

The game does not offer a pause feature, but individual gameplay often is not long enough for this feature to be required.  While this isn’t a game breaker by any means, it is quite the annoyance.

This game is free, and when I say free, I do not mean free-to-play or freemium – it is 100% free. As previously mentioned, there are ads, but they are minuscule and easily dismissible. Because of this, the value of the game is extremely high, so much so that some people probably wouldn’t mind donating a dollar or two in appreciation.

There’s no real reason not to pick this miniature racing game up. The minimalistic design, relaxed but challenging gameplay, price, and cuteness value make this a winner, even in its young state. With time, the developer may also add more features and tracks, greatly increasing the game’s playability. There’s not much to the game at this point, but it’s satisfying thus far. Download No Brakes in the App Store for iPhone and iPad.

Because this is somewhat of a racing game, there are quite a few apps with similar functionality. Games like Mini Motor Racing and VS. Racing 2 offer the top-down vehicle experience, but neither lack the overall speed goal or simplicity of No Brakes.