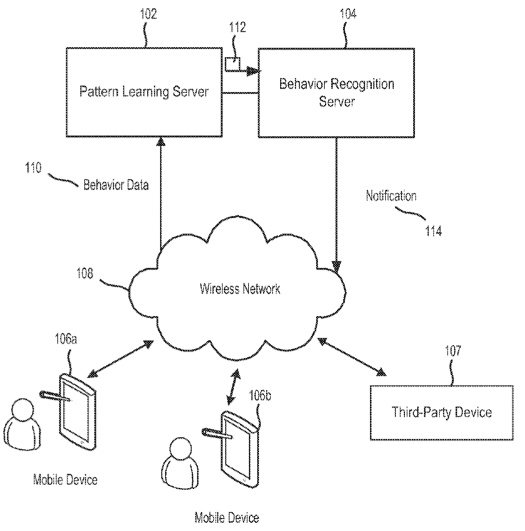 Apple is researching new methods of securing data on your iPhone by sending an alert to another device or locking it altogether to protect against theft should it detect a pattern of unusual behavior.

The United States Patent and Trademark Office today published an Apple patent for “Generating notifications based on user behavior”.

The document outlines a method by which an iPhone could automatically lock itself or set off an alert in case it detects unusual changes in user behavior. Read on for more…

According to the patent abstract, Apple’s invention would verify current user patterns against the behavior-data patterns generated from previously-received behavior data of an original user.

Behavior data cited in the document include motion sensor data, gestural patterns and even stuff like grammar and vocabulary and keyboard orientation preferences. Your iPhone would harvest all this data over time in order to gradually build a profile of who you are as a mobile device user.

For example, an iPhone’s accelerometer generates data about a user’s gait, then compares that information with data stored either onboard or on a remote server. Analysis may also take place offsite on a pattern learning server.

This would be accomplished by asking the current user to either enter their iTunes password or renew their Touch ID verification in order to confirm their identity.

The patent also shows how it could tell a care worker when an elderly device owner starts exhibiting unusual behavior or stops using their device.

The system could also theoretically integrate with Apple’s existing anti-theft software features, allowing users to remotely wipe or lock a device that has been found to have been operated by someone other than its owners.

As an added layer of security, the invention could send a network command alerting the original owner that their phone may have been compromised, presumably through the Find My iPhone service.

The server can send alerts to another mobile phone owned by a different party. The invention was originally filed last January and credits Apple employees Gregory T. Lydon and Sylvain Rene Yves as its inventors.