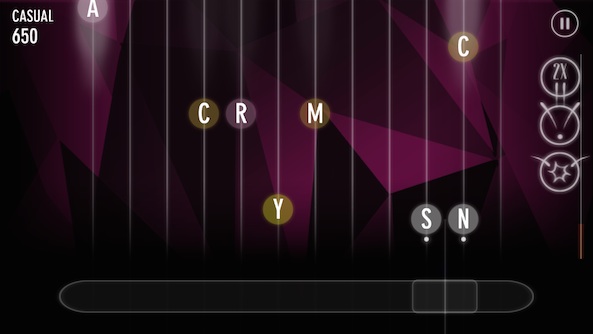 I like games that are music themed. When bands put out weird, trippy apps starring their tunes, I get a kick out of what they dream up. I don’t particularly like rhythm games, though. They never seem to hit the beat right, and I can’t shake my pre-existing knowledge of real-life music experiences. I’m always thinking, “That’s not how that solo is played.”

Alphabeats is a music themed game that uses electronica tunes to set the atmosphere, but doesn’t ask you to tap to the beat in order to win. We’ve got a hands-on game review of Alphabeats for you today…

The game field is made up of 12 strings that hang from the top of the screen. From each string, one or more discs drop in varying intervals based on the rhythm of the song currently playing. The discs each have a letter on them. The letter grabber, or paddle, is at the bottom of the screen. Players slide the paddle across the screen, collecting letters to make words.

The background is normally a subtle geometric design ranging in color. However, there are times when the shapes become more prominent. I think it happens when the music is at the peak of a crescendo, or possibly only during certain modes, like Tricky or Spellfire.

The game lasts as long as the song does. There are five songs preloaded in the game. Each one is slightly harder. In addition to increased complexity, you can change the difficulty level for each song. Play Casual, Tricky, or Spellfire.

When the song ends, you’ll see your stats for that game. Check the different words you made, find out which word scored the highest points (the “raddest” word) and get your score. 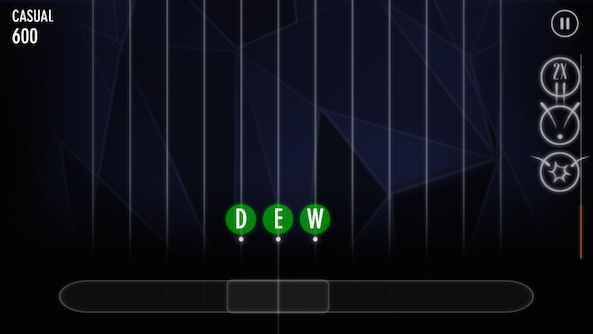 You will first pick which song you’d like to play along with. I recommend starting with the simplest one until you get acquainted with the gameplay. Then, select your game mode. Again, I suggest casual until you feel like you can handle the hard stuff.

Then, the game begins. The letters will drop from above on different strings in random order. They will drop in time with the song, but that won’t have much effect on your gameplay. Your job is to spell words.

Grab letters that you want to use and avoid ones you don’t. The larger the word, the more points you’ll score. Plus, rare letters, like W, X, and Z will increase your points. So, to get the raddest word in a game, grab rare letters and make a big word. Don’t forget to use your power ups to help get a super high score.

When you think you’re on track to scoring big, tap the multiplier button to make sure you get the maximum points. The score multiplier gives you double points to whatever letters are on your paddle. Once you submit a word, the points will be doubled.

If your word is starting to get too big to fit without accidentally running into a falling word, shrink it into one spot. This is very useful when trying to create words with more than four letters. As the word grows, it becomes increasingly difficult to avoid accidentally grabbing letters you don’t want.

If you grab a letter that won’t help make a word, the entire word will disappear and so will your points and the multiplier power up.

If you are having trouble weaving your way around the influx of dropping letters, clear the screen by using the bomb power up. All letters except the ones on your paddle will disappear.

Unfortunately, you can only use each power up one time per game, so be sure to use them wisely.

Once you’ve collected as many words as possible within the length of time the song plays, the game ends and your points are tallied. Players earn a grade for their final score. Each song has a minimum point score in order to receive a particular grade.

When you visit the section that shows the words you’ve made, you’ll see that there is a “word of the day.” Spell that word in a game to receive a huge point score. This will help get you that “A” you’ve been trying for.

You are also supposed to be able to tap on any word you’ve made in the “My Words” section in order to see the definition of it. However, every time I tapped on a word, I received a message, “No definition found” with the option to look it up on the web.

You can keep playing the same song over and over again until you get an “A” or move on to something more complex. The choice is yours. If you get sick of the five included songs, you can also purchase additional packs of songs for $1.99 and up. 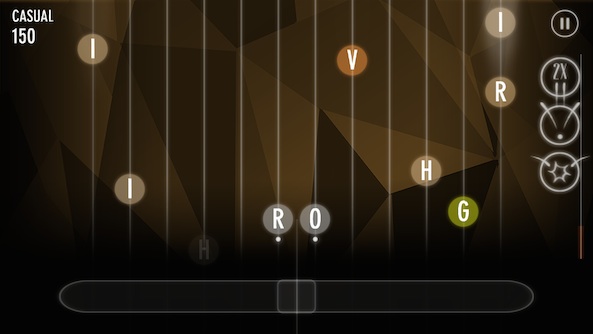 This is a lot of fun for fans of word games. It combines the action of arcade games, the atmosphere of music-based games, and the education of spelling. My favorite part is the Word of the Day. I learned a few new terms already.

The paddle lagged sometimes making it difficult to grab or avoid a letter.

Alphabeats costs $1.99. The price is absolutely reasonable for a game with such a high replay value. You can literally play the same song over, and over, and have a different game each time. Plus the various modes of difficulty and Word of the Day feature will keep you coming back for more. The only reason you’d spend more money is if you got sick of the songs.

Fans of word games should take a look at this one. It is fun to play and offers an arcade action type challenge. Small words are easy to create, but to get the high score, you’ll need to be fast on your feet to grab those rare letters and make larger words. You can download it in the App Store today.

Duet Game is another arcade style game with a heavy music influence. Deemo is a rhythm-based tapping game that has a story to tell.

What do you think of Alphabeats? Will you be mixing your music and spelling tonight?

PSA: Stop asking if palera1n will ever support anything newer than the iPhone X, it won’t