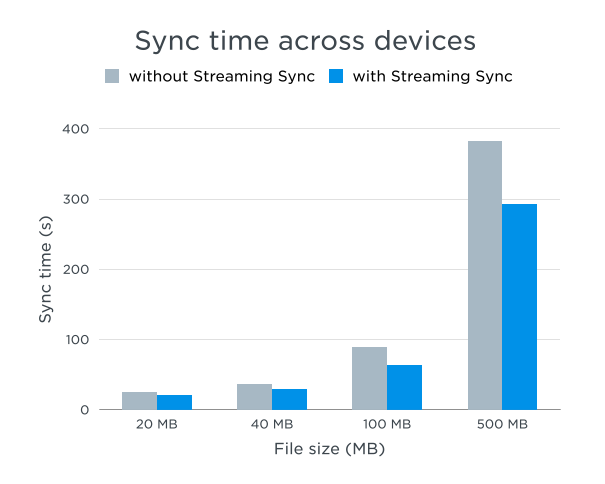 Heavy Dropbox users may have noticed that large files sixteen megabytes in size and up won’t start downloading to their other devices until they’ve finished uploading fully to the Dropbox cloud on the device which has initiated sync.

A new Dropbox technology dubbed Streaming Sync promises to speed up sync times of large files by up to two times, by downloading small slices of a large file as it’s still being uploaded to the servers.

Before you can start taking advantage of this technology, you must update your desktop Dropbox client to the latest version…

Dropbox says a newly optimized sync for large files, along with other features that improve how you use Dropbox on your computer, is available via an updated desktop client.

Before Streaming Sync, file synchronization was split into distinct upload and download phases. This meant that a file needed to be uploaded in its entirety before other clients even began the download. While this was pretty fast, we were determined to make large file syncing even faster.

With Streaming Sync, we can overlap those phases and “stream” data through our servers to your devices. That means an improved multi-client sync time for large files — typically 1.25x faster, and even up to 2x faster.

It’s a nice time saver and definitely useful when syncing large files such as video clips, layered Photoshop images and other projects.

Dropbox Tech Blog has more on how Streaming Sync works.

Other features of the new Dropbox client include support for an additional four languages, the ability to create a shared link to files and accept shared folder invites right from the Dropbox menu and a new scrollable menu notifications, pictured below, “to help you keep closer tabs on everything going on in your Dropbox.”

The team is rolling out Streaming Sync to folks on the latest version of the desktop client over the next couple weeks so don’t panic if the feature isn’t enabled for you just yet.

Dropbox also has a nicely done iPhone and iPad client, available free in the App Store and requiring iOS 7.0 or later.