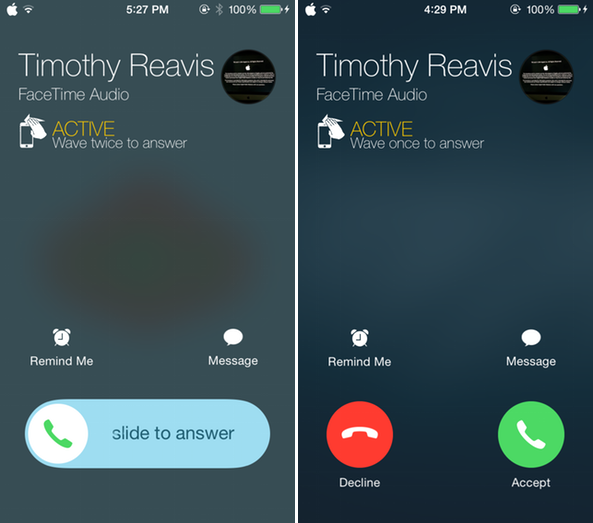 HandsFree is a recently released jailbreak tweak that works in conjunction with iOS 7’s Phone and FaceTime apps and introduces the ability to answer incoming calls straight to speaker with a simple wave of your hand. The key phrase here is “straight to speaker,” as this tweak eliminates the two-step process previously required to answer a call and enable speakerphone.

HandsFree works with FaceTime Video and Audio in addition to cellular calls, so answering an incoming call is seamless across the board…

The ease with which a call can be answered — with an effortless air gesture — proves to be extremely convenient while driving, wearing gloves, working with wet or greasy hands, or in a plethora of other situations where touching your device’s screen is difficult or could soil it. Even in an office scenario, being able to answer a phone call without having to pick up your iPhone or touch it at all is simply convenient.

HandsFree comes with multiple customization options in its settings panel, allowing users to configure how many waves are required to answer a call and how fast those waves have to be. The number of necessary waves varies depending on if the device is locked or unlocked, helping to minimize the chance of accidentally answering a call when, for example, taking the device out of a pocket. 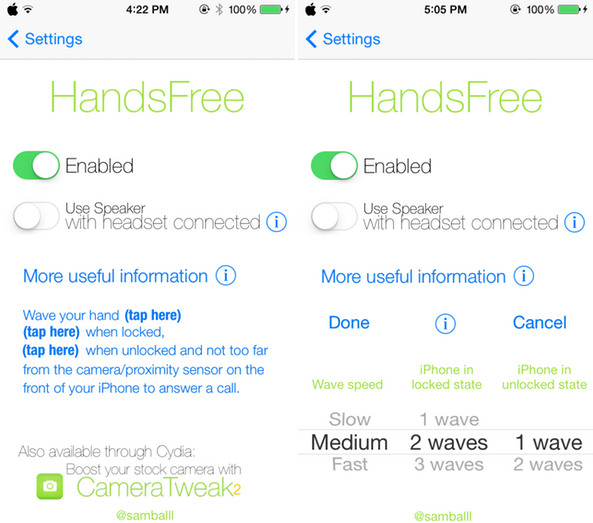 There’s also a toggle in the tweak’s settings panel to enable answering straight to speaker if a headset is connected. In my personal use, I have this disabled, but the option is there for those who want it.

The developer makes an effort to note that HandsFree won’t drain your iPhone’s battery. I assume that the tweak only begins detecting gestures via the proximity sensor while a call is incoming, so users shouldn’t have to worry about an increase in battery usage over an extended period of time.

In testing, HandsFree performed quite well, and all incoming calls were answered with a wave or two, depending on the configuration. One notable feature I found lacking is the ability to answer FaceTime Audio calls directly to speaker. Instead, these are answered with the speakerphone off, which negates the purpose of having HandsFree unless you’re wearing a headset. However, this issue may be fixed in a future update.

Something to note is that HandsFree is only compatible with iPhone 5, 5c, and 5s running iOS 7.1 and up. Older devices, unfortunately, aren’t supported.

Because it uses the proximity sensor to detect wave gestures, a hand needs to pass relatively close to the screen to properly trigger HandsFree. While testing the tweak, I found that waving my hand approximately one inch from the face of the device was sufficient for the proximity sensor to acknowledge my gesture and answer the call.

While some jailbreakers may not feel a need for HandsFree, it’s an exceptionally convenient tweak for those who often find themselves in situations where answering a call the traditional way isn’t practical or even possible. Although simple in concept, this tweak does a lot for frequent drivers, cooks, or someone looking for an easier way to answer calls at the desk.

HandsFree is available in Cydia’s BigBoss repo for an inexpensive $0.99 — well worth the money for the usability it offers.

If you download it, be certain to leave a comment below telling us what you think about HandsFree and how it works for you in day to day operation.