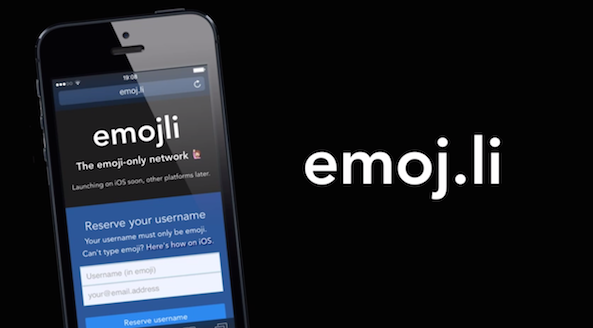 As if there weren’t already enough ways to communicate with others, this month has now been witness to two different outside of the box messaging platforms. The first was a quirky new app called Yo that took the App Store by storm earlier this month with over one million users in just days. The two-character app is a simple and efficient messaging tool that solely consists of sending and receiving notifications that say Yo.

Emojli is the second, an emoji-only network looking to replicate the success of Yo from a few weeks ago. Forget text messages, hashtags, spam and trolls, and communicate solely with emojis. Emojli is now accepting username reservations on its website, which are also entirely in emoji. While the app seems like satire, its creators Matt Gray and Tom Scott claim it will be launching on iOS soon and other platforms later…

“Social networks are broken, with spam, trolls, memes and hashtags,” the video says. “It’s time for something simpler. We present Emojli, the emoji-only network. There is no spam, because there isn’t an emoji for spam. There is one for aubergine. We’re not sure why, but you can use it. No bloody forward-this-to-ten-people memes, no stupid hashtags. The worst message you could possible receive? It’s a pile of poo.”

It’s hard to predict whether apps like Yo or Emojli can actually establish themselves as mainstream offerings among the multitude of messaging services available, or if they will simply go by the wayside after their fifteen minutes of Flappy Bird-like fame. I’m going to stick with the latter, but maybe communicating solely with yo’s and smiley faces will somehow be the next big thing.

Does messaging with emojis seem absurd to you?