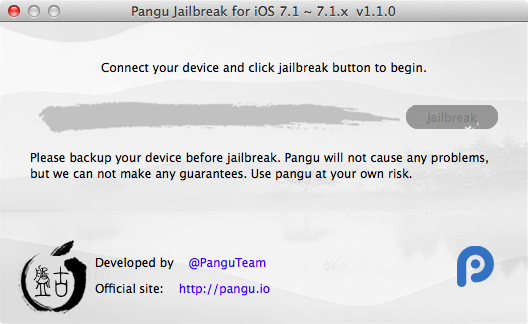 Users who weren’t able to jailbreak their iOS 7.1.x devices because of the lack of Mac support for the Pangu jailbreak tool can rejoice. Earlier today, the Pangu Team released Pangu 1.1.0 with a few improvements and bug fixes. Most notably, Pangu 1.1.0 brings support for Mac and is now available in English.

Among the imrprovements, it appears that one major bug that threw some devices into a boot loop has been fixed. From what we hear, it is now much more stable than the previous version…

The following changelog can be found on the English version of the team’s website:

According to the Pangu Team, 25PP (PPsync) has been removed from the English version, leaving Cydia as the one and only installer. It is our understanding that the Chinese version still contains it though.

We do not bundle any other application in english version except Cydia. Still don't forget to backup your data before using Pangu.

If you successfully jailbroke your iOS 7.1.x device before using Pangu, then there is no reason for you to do anything at this time. If however you’ve been having issues, it might be a smart thing to do to restore and try again with Pangu 1.1.0.