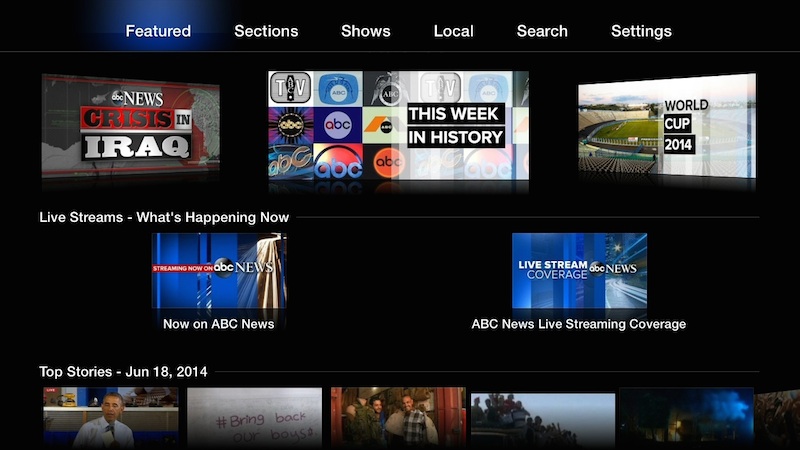 Apple’s media-streaming box has expanded its list of content sources this morning with the addition of both live and on-demand video from ABC News, AOL On, PBS Kids and Willow TV, a sports channel dedicated to international cricket and the Official Broadcaster of Cricket in the United States and Canada.

Integration with ABC News gives Apple TV owners free access to local news, real-time breaking stories and 50 years of historical footage from ABC News’ archives, including “This Week in History” and “The Day in Pictures” features.

In addition to the aforementioned new channels, the $99 device has gained a redesigned Flickr app. Read on for the full reveal…

As first noted by MacRumors, the Disney/ABC/ESPN media conglomerate now streams its various entertainment offerings to the Apple TV users in the United States, including real-time local news and five decades worth of historical footage from its archives available on-demand.

ABC News provides up to four live streaming events at once so viewers can select and view the live news they care about most, be it court trials and breaking news to the daily White House press briefing, live continuous coverage of the day’s top stories, videos and more.

Some sources like Willow TV require a $15 per month subscription for full access. Curiously enough, the ABC News channel is available free of charge – no cable subscription required whatsoever.

Availability of ABC’s content on the Apple TV will expand worldwide “in the coming weeks,” the company said.

The PBS Kids channel doesn’t require a cable subscription though you’ll need to authorize your Apple TV on the PBS website in order to use the service.

Last but not least, the revamped Flickr app now comes with a revamped app icon and a new Your Flickr section.