As you know, OtterBox makes a myriad of smartphone cases for a living. The Fort Collins, Colorado based firm is perhaps best known for using military-grade rugged technology that offers exceptional protection for your devices in the harshest of environments.

They produce wallet cases, waterproof cases with Touch ID support (based on their acquisition of fellow case maker LifeProof) and everything in between. Their Defender and Symmetry cases, for instance have received pretty rave reviews.

Today, OtterBox is expanding its family of Power Cases with the addition of a new Resurgence series which combines more than two times the battery power for your device with OtterBox’s trusted protection…

The $99.95 case is billed as a single solution to a two-fold problem: the iPhone’s battery performance and the proneness of its screen to damage from drops and shock. To protect your device from damage, the case employs a two-piece design with military-grade drop defense and shock absorption.

The iPhone 5/5s case has a built-in 2,000 mAh lithium ion battery which delivers more than two times the battery power. Folks who depend on their iPhone all day long will no doubt appreciate not having to frantically hunt for a charger or power outlet halfway through their day.

Here’s a quick video overview of the Resurgence series.

The case uses OtterBox’s own auto-stop charge technology to prevent the built-in battery pack from charging the iPhone’s battery past the 100 percent mark.

Resurgence features exclusive auto-stop charge technology. By shutting the case off once your phone reaches 100% charge, this iPhone 5 and iPhone 5s battery case saves power for later. When you need it most.

Other perks include support for both wired and wireless syncing without removing the case and a headphone jack extender which doubles as a headphone cord keeper. 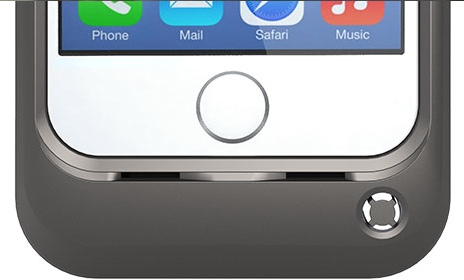 Last but not least, there’s a handy LED on the front of the case – as illustrated above – to display the power status in 25 percent increments.

The Resurgence Power Case is available in Black, Glacier, Teal Shimmer and Satin Rose styling. You can pre-order yours for $99.95 over at the OtterBox webstore.