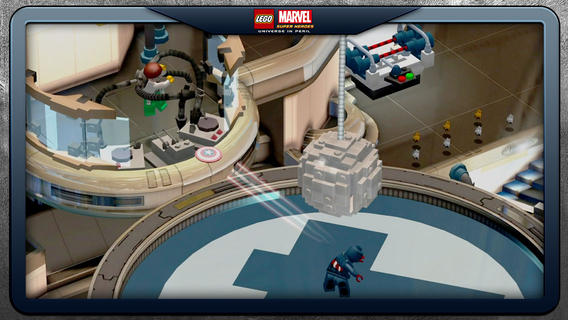 In a somewhat surprising move, Warner Bros. has released a new game from its popular Lego franchise for iOS called ‘LEGO Marvel Super Heroes: Universe in Peril‘. The title, which landed on PCs and consoles last year, is now available on both the iPhone and iPad.

Like most LEGO games, Marvel Super Heroes: Universe in Peril falls in the action adventure genre. Players take control of Iron Man, Spider-Man, the Hulk and other Marvel characters in an effort to stop villains from building weapon capable of destroying the world… 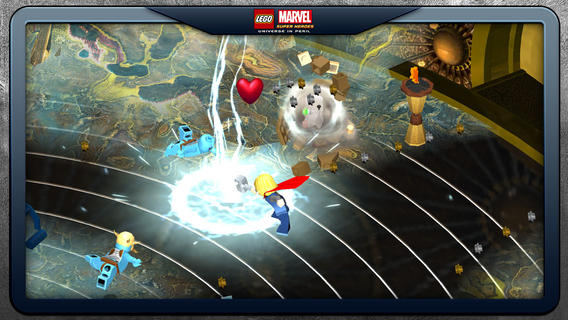 Here’s a little background on the storyline:

The game begins as Galactus, the devourer of worlds, is eating the remains of a destroyed planet. Still hungry, he sends his herald – the Silver Surfer – to find him more food. The Surfer’s search leads him to Earth, where he is chased by S.H.I.E.L.D. and Iron Man. Silver Surfer is knocked out of the sky by Doctor Doom with his surfboard shattering into several ‘Cosmic Bricks’ that fall onto the Earth. With these blocks containing immense power, Doctor Doom captures the powerless Surfer and forges an alliance with Loki and other villains to collect the Cosmic Bricks and make the powerful “Doom Ray of Doom” – which Doom intends to use to both stop Galactus from devouring Earth as well as to rule the planet. However, S.H.I.E.L.D. director Nick Fury calls upon the superheroes of the Marvel Universe to retrieve the bricks before they can be captured by Doom and his army.

And a few of the game’s more notable features:

And finally, a video showing the game in action:

I haven’t had the chance to play the game myself yet, but if past LEGO entries are anything to go by, it’s bound to be a solid title. Both IGN and Game Informer rated the console version a 9/10, and Warner Bros. has a good track record of porting these games to mobile.

If you want to check it out for yourself, you can find LEGO Marvel Super Heroes: Universe in Peril in the App Store for $4.99. There does appear to be several in-app purchases available, but as far as I can tell, not buying them shouldn’t impact your gameplay much.